Save
What Is Plexiglass? The Protective Plastic Many Are Using to Combat Viral Spread
Share
Or
Copy

Although chemist and inventor Otto Rohm had first come up with the idea for plexiglass in 1901, it wasn’t until 1933 that the Rohm & Haas company first introduced it to the market under the trademark name Plexiglas. The material, which is considered a lightweight and shatter-resistant alternative to glass, has had a fascinating history and experienced a multitude of different uses in that time. Today, plexiglass continues to be utilized in new and interesting ways, including as a potential means with which to help combat coronavirus spread. Restaurants, stores, and other businesses have begun using plexiglass partitions as protective shields for both workers and customers, especially as cities and towns slowly reopen. Below, we dive into this unusual material, addressing its material properties, its history, and the ways it continues to be used today.

Also known as acrylic, acrylic glass, or more scientifically, poly(methyl methacrylate) (PMMA), plexiglass is a transparent petroleum-based thermoplastic typically manufactured in sheets. It is a strong, tough, and lightweight material, with a higher impact strength than glass. It is also useful for outdoor applications due to a higher environmental stability than most other plastics, such as polystyrene and polyethylene. These advantages, combined with other properties including high service life, effective light transmission, and simple processing, make plexiglass a highly useful invention. However, plexiglass products rarely use pure PMMA, instead modifying the material to optimize its properties even further. Such modifications include adding butyl acrylate to improve impact strength, adding methacrylic acid to allow for higher temperature uses, adding dyes to give color for decorative applications, and many more.

After the invention of plexiglass in the early 1900s, the material was quickly used for a myriad of different applications, including for instrument covers, watch glasses, and cutlery. Manufacturers included not just the Rohm & Haas company but also the U.K.’s Imperial Chemical Industries, which trademarked the name Perspex, and the U.S.’s DuPont Company, which trademarked the name Lucite. During World War II, the plexiglass industry grew dramatically due to the use of the material in aircraft cockpits. The Rohm & Haas Company staff, for example, increased tenfold during this time. Following the war, plexiglass began to be used for more architectural applications, including illuminated advertising, glass roofing, and façade design. By the 1960’s and 70’s, plexiglass was also used in sanitary facilities and greenhouse windows.

Today, plexiglass is used for an extremely wide range of applications. As a transparent glass substitute, it is often used for aquariums, viewing ports in submarines, automobile lenses, spectator protection in sports rinks, aircraft windows, police riot control vehicles, lighthouse lenses, and more. It is also used in a number of medical fields including for some surgeries, dentistry materials, and eyeglasses.

Architecturally, plexiglass can be used for windows, and are most often used in skylights due to their easy maintenance, strength, and weather resistance. They are also often used in bathrooms – for example, in shower frames – because they are slip-resistant and shatterproof, mitigating the risk of serious injury. These advantages additionally make plexiglass a useful furniture material, especially for shelves, stools, and tabletops. Finally, plexiglass is used for several more specialized architectural applications as well: its transmission of sunlight, resistance to breakage, weather resistance, and tendency to collect little dirt makes it the ideal material for building both greenhouses and solar panels.

With COVID-19 safety requirements necessitating temporary architectural interventions in restaurants, stores, and small businesses, plexiglass is gaining yet another role. The World Health Organization recommends that food markets and grocery stores use plexiglass display cabinets to serve baked goods and self-serve foods instead of openly displaying unwrapped food products. Grocery stores and pharmacies have also been installing clear plexiglass panels at checkout registers to limit viral spread between customers and workers. As businesses and offices slowly reopen, the use of plexiglass partitions is expected to only increase, with some offices planning to add barriers between desks or even sinks. Plexiglass is also being added in restaurants, movie theaters, and nail salons to limit contact not just between workers and customers but among customers themselves.

These plexiglass partitions can take many forms – many are simple sheet barriers, for example between booths at restaurants, but some design studios have looked to implement plexiglass safety measures that are both effective and aesthetically pleasing. The Christophe Gernigon Studio, for example, recently designed a round, lamp-like plexiglass protection bubble called PLEX’EAT that can be installed over any kind of seat or table, protecting users even in crowded environments or spaces that necessitate close interaction. An obvious example is restaurant dining, where PLEX’EAT bubbles can be installed to over the entire table or even over each seat, protecting each guest even from each other. Other examples include installing them over receptionist desks, conference room seats, classroom desks, and even casino seating.

Plexiglass is a versatile material with properties that lend it to widespread use throughout an array of different industries, including architecture and design. The applications of plexiglass have varied throughout its over-a-century-long history, adapting to new needs and historical changes as they arise. The COVID-19 pandemic has necessitated a global response across not just governments but corporations and industries as well, including medical equipment companies, face mask makers, and in this case, plexiglass manufacturers. Today, properties of plexiglass yet again prove useful – and it is extremely important to review its environmental considerations and recyclability levels since possibly its use will increase in the near future.

Check out some projects that incorporate Plexiglass into their designs.

NewsArticlesPlasticPlexiglassMaterialsCOVID-19
Cite: Lilly Cao. "What Is Plexiglass? The Protective Plastic Many Are Using to Combat Viral Spread" 06 Jul 2020. ArchDaily. Accessed . <https://www.archdaily.com/943049/what-is-plexiglass-the-protective-plastic-many-are-using-to-combat-viral-spread> ISSN 0719-8884
Save 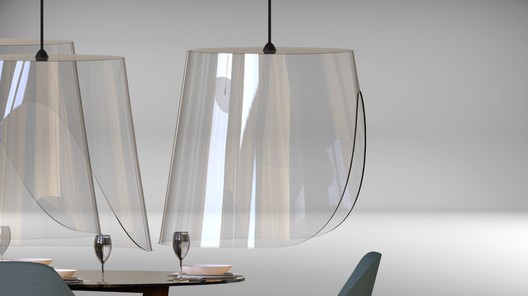