CHYBIK + KRISTOF ARCHITECTS & URBAN DESIGNERS have been selected as the winners of the public competition to design and build the Jihlava Multipurpose Arena. One of the largest sports and leisure complexes in the Czech Republic, the project, built on the city’s existing hockey stadium, is scheduled for construction in 2021, to be completed by 2023. 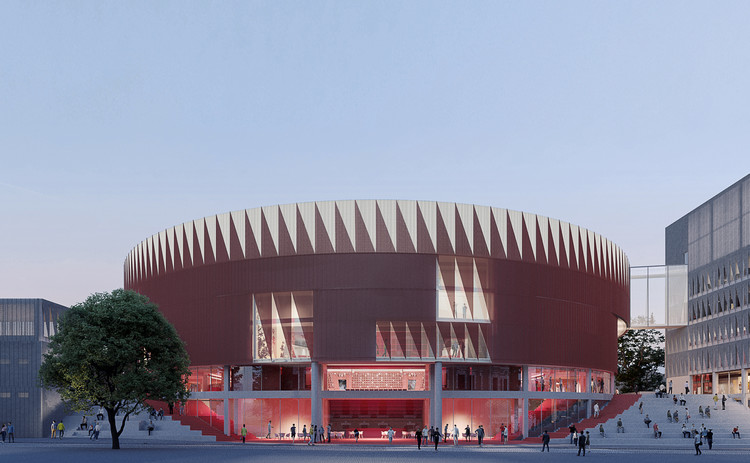 Bringing together sports, culture, and social venues, the project reimagines the existing site as an urban sociocultural campus. In fact, once completed, the structure will act as a “public platform open to a variety of audiences for a diverse range of activities, in an effort to revitalize this long-neglected area of the city”.

Erected on the city’s existing hockey stadium, a deteriorating indoor sporting arena built in 1956, the project revisits the structure and expands into a four-building multifunctional center, with a capacity of 5,600 spectators. Integrating the neglected space to Jihlava’s city center, and reviving the notion of public space, the scheme puts in place an adaptable ice rink, a rooftop running track and a gym as well as a sports academy, hospitality establishments, and shops.

Located on the border of Jihlava’s historical center, the versatile space, adjacent to a park and university, blends within its surrounding urban landscape through the introduction of several public spaces nested throughout the buildings. A transparent and fluid transition between spaces, the arena encourages new initiatives and lays the foundations for free movement and interaction.

We envisioned the Jihlava Multipurpose Arena as a deeply versatile complex, whose various functions are reflected at once in the technical structure, the landscaping and the aesthetics of the buildings. In integrating multiple purposes, we took significant consideration of their various audiences, thereby seeking to reflect the city’s diverse social and generational communities and to encourage their interactions. More than a center for sports and events, the arena is a social campus for the city – used by the people, thereby designed for the people. -- Ondřej Chybík and Michal Krištof, founding architects of CHYBIK + KRISTOF.

Generating four distinct buildings, two of which already exist, connected through open-air walkways and green spaces, the project will take on a spacious new arena at the center. The existing stadium will undergo full reconstruction and the sports academy will be refurbished to host new functionalities. Conceived as a versatile space, space can serve at the same time as a hockey rink, exhibitions and events hall, and concert venue.

Finally, the Jihlava Multipurpose Arena is an everyday space, an urban sporting, cultural and social campus for visitors of the arena, athletes, students of the academy and university, and the general public to invest. “As the four buildings’ complementary and interconnected functions contribute to this, they share a distinct red metal grid façade, formed by apposed triangles”. 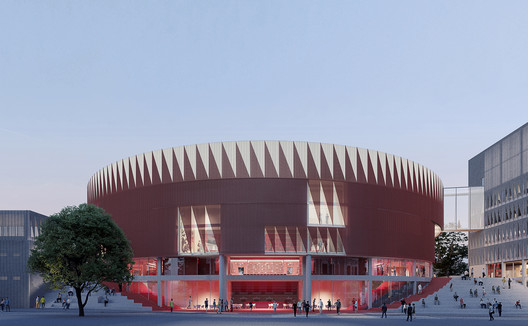