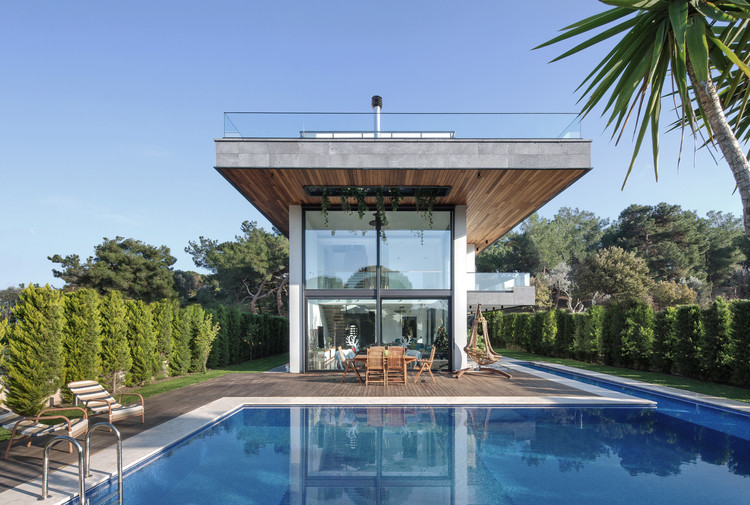 The building, located in the 934 m2 plot in Yelki (Güzelbahçe), shows itself with a linear plan between the ancient pine and olive forests surrounding it. The building, which lies on the parcel with a 240 cm elevation difference on the east-west axis, creates different spatial perceptions in the interior with its two and three-storey gallery spaces, and gives clues about the traces of the daily flow in the house. Transparent glass facades in the large span continue along the two-storey gallery in the hall.

The consoles of 4.5 meters on the south and west facades trace the sunlight's interior projection in different angles and elevations for four seasons. Wide consoles produced by reinforcing steel beams into beam-free cork floors optimize sunbathing and provide shade in summer and allow sun rays to float inside in winter. The structure, which runs linearly on the east and west axes, consists of three floors, the lower floor, the upper floor and the first floor. It provides access to the lower ground floor with the entrance of the staircase, which goes down from the road level of +0.25 m. The wooden entrance staircase extending over 3 floors in bare exposed concrete meets the large entrance hall.

The three-storey gallery space on which the staircase is suspended reinforces the spatial and visual connection between the floors. The guest bedroom and bathroom are positioned behind the entrance hall, while the kitchen and dining area are located on the left. Wide span facades and exposed concrete surfaces integrate with the gallery, creating a space-specific identity. The metal fireplace, hanging from the reinforced concrete cork floor and tangent to the western facade, physically warms the space and becomes a reference point for the interior as a visual object.

The pool, which is located on the west facade in the outdoor area, is also part of the view where the seating area is directed. The wooden teak floor used by the pool prepares a soft floor for the transition between the water element and the green landscape. The upper ground floor is accessed by a staircase that joins the entrance hall and joins it as an object that adds visual richness to the interior. This floor has a master bedroom, an en-suite bathroom, a dressing room, and two children's rooms and a bathroom.

The intermediate space from the staircase overlooks the gallery space that surrounds the seating area. On the first floor of the building; In addition to the sauna, study, hobby rooms and terrace areas, there are places where the residential units (such as iron and laundry room) are located. Koray Arslan House, as a residential structure that represents its role in the depiction and shaping of daily life, settles as a fully exhibited object in its natural environment. Thus, in addition to being a scene where the natural flow of daily life is monitored, it also turns into a design object exhibited in this flow. 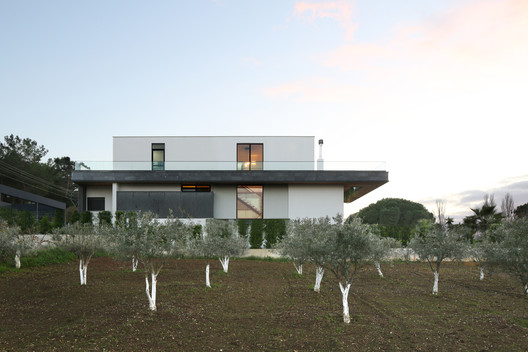