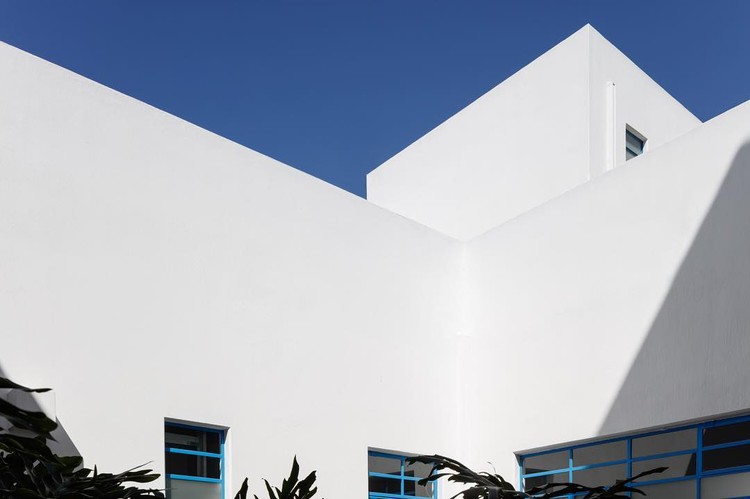 This article is a part of a collaboration with coolhuntermx.com. It was originally published under the title "Luis Barragán and José Clemente Orozco,The House They Built Together ", written and photograped by David Lozano Díaz in collaboration with Lorena Darquea.

There's a lot of discussion surrounding Casa Orozco as to who the real creator is —Luis Barragán or José Clemente Orozco. And even though we know that one of them was responsible for the architecture, the answer still remains unclear. Orozco returned to Mexico in 1934, by invitation from the Mexico City government, after a seven year stint in New York. Once he arrived, he was commissioned to paint a mural inside the Palacio de Bellas Artes. Afterwards, he received commissions from the Jalisco Government to paint a series of murals for three public buildings in Guadalajara.

It would take several years to complete the assignments in Guadalajara and Orozco soon found himself in need of a studio where he could live and work on his other projects. To help him in his endeavor, he called upon Luis Barragán, whom he had met during a trip to New York and the two set to work designing the home studio.

Meanwhile, in 1932, after returning from his second trip to Europe, Luis Barragán took over as caretaker of his family's estate, forcing him to put much of his work on hold. Two years later, he would complete the Parque Revolución as well as all the homes on the block surrounding it. These projects would come to signal Barragán's transition from an ornamental, regional style to one more in sync with modernity.

Due to mounting economic pressures sparked by agrarian land reforms, it became increasingly difficult for Barragán to remain in Guadalajara. He was reluctant to give up his lifestyle, but life as an architect in the city left many gaps that needed to be filled. Finally, in 1935 he decided to move to Mexico City, just months before Orozco would arrive Guadalajara. The distance between them complicated their collaboration, as it could only be done through sporadic visits and written correspondence. Not only that, the two kept their correspondence private, with no public story or record to document the details of their collaboration. So while it's difficult to know exactly what happened between the two, there are hints that give ideas as to their relationship.

First and foremost, Orozco wanted to be an architect. At twenty, he abandoned his agricultural studies and began to dedicate himself to becoming an architect. His dream was cut short, however, after losing his left hand while playing with a firework, leaving him unable to work on technical drawings and forcing him to abandon his studies in architecture.

Fortunately, Orozco dedicated himself to other creative pursuits and found his place in painting, soon becoming the muralist that we know today. He never fully abandoned his obsession with architecture, however, and this manifested often in his work. The first of these, called The White House, was completed in 1922. Meanwhile, Barragán was in his second year of civil engineering school. Orozco then finished his work Pueblo Mexicano in 1930, around the time when Barragán was making a name for himself in the Regionalist movement in architecture.

Through his work, Orozco revealed his personal idea of modern architecture--pure, simple, and white; no frills or ostentation. For Orozco, modern architecture centered on geometric proportions and the perfect mix of light and shadow. It should come as no shock then, that Orozco then took the same ideas he put into his artwork and applied them to his house. The house was not entirely without Barragán's touch, however, and nowhere is this more apparent than the rooftop.

Barragán visited several works by Le Corbusier in France, including the Beistegui Apartment. In it, the rooftop had been transformed into an open air living room, bringing the Paris sky into an intimate family setting. For Barragán, it was a moment of introspection. He loved the idea of having a private outdoor "room" under the open sky and went on to make this a prominent feature in his own home-studio in Mexico City.

In fact, the skylight that can be seen from the front of the house is a reference to another of Le Corbusier's works, Villa Le Lac, which sits on the shores of Lake Geneva. In the garden of Villa Le Lac, there is a raised wall that simultaneously downplays the surrounding landscape while framing it with a "window." Barragán took this same concept as a way to highlight the natural landscape of Cerro del Cuatro and the woods around it. Unfortunately, this landscape has given way for urban expansion and now features only concrete and glass.

There's still a lot that we don't--and probably never will--know about the collaboration between Orozco and Barragán and who had more influence over the house in Guadalajara; however, what we do know is that Casa Orozco is a jewel of modern architecture created by two of Mexico's most vibrant artistic minds.

To learn more about Casa Orozco, visit the official website casaorozco.mx, where you can find more details about the artists and their lives and work.