Save
The Nest / Porky Hefer Design 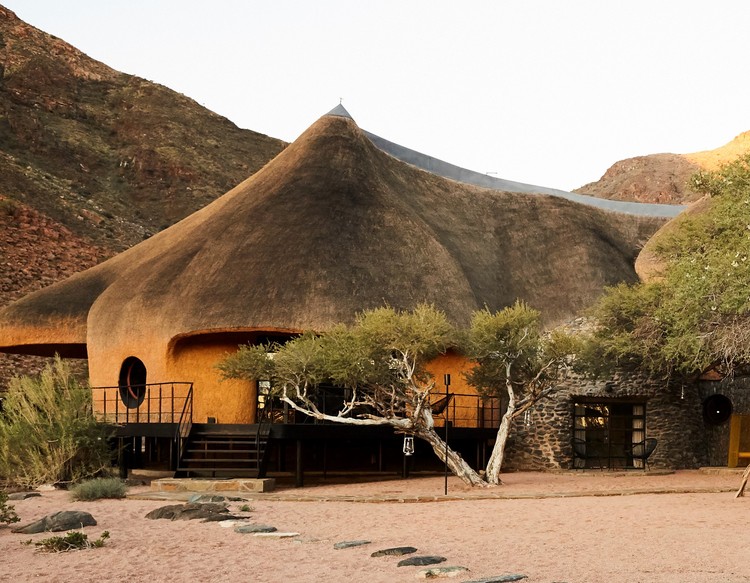 Text description provided by the architects. I was convinced that my smaller nests were bigger than a chair or a design piece. It was about vernacular architecture is the solution to the building. Using local materials sourced locally employing local people with local skills. I designed these camps with nests all over them and then I tried the idea for 3 years changing forms and materials according to the locations I was pitching them. But people didn’t really get it and preferred 4 walls and a roof. One answer from a reputable safari group was “we had a bad year last year so we are going to do exactly the same as we did last year.” But I kept on trucking.

I finally met the client Swen Bachran a German Namibian. He called me one day and said he was going to Namibia to look at some land. My wife and I accompanied him to the potential farm. It was here I managed to spend some quality time with the sociable weaver's nest. The negotiations for the farm seemed to be going well so I proposed the idea of a dwelling that was based on the sociable weaver's nest He kind of liked the idea but I still had to prove it and get someone to build it.

The design was hand-drawn. It started with simple sketches of smaller units but grew and grew into the three-story, 4 bedroom/bathroom structure that stands today. We did no 3D drawings on the computer all was done by hand every last detail was first sketched then approved by Swen then built. Great care was taken to ensure that the building would blend into the landscape rather than dominate it. The shapes of the surrounding mountains, the texture of the materials, the layers of rock, and the colors of the site were all taken into consideration and all help make it fit into the site so well.

Most of the structure consists of a skeleton of a hand-bent steel bar that’s thatched with reed sustainably harvested in Northern Namibia. The stone used is granite from the site to emulate the bark of the camelthorn tree which is abundant in the area, we laid the rocks vertically rather than horizontally. The bricks were hand-made on-site with local stones and river sand. The wood is locally sourced Kiaat and Rhodesian teak.

Distance and location were major factors, and it's only reachable by dirt road, the last 28 requiring 4x4 or a tractor. With the first town being 125km away and a city 400km.

I incorporated some of the genius of the sociable weavers building skills which help in such an extreme environment. There is a gap between the inner and outer walls and this increases and decreases according to how much insulation is needed in the various sections. The living area is very big and helps keep cool on very hot days, in winter the smaller bedrooms retain the heat of the day for the colder nights. Both the outer and inner walls are of thatch, so you are cocooned in it creating a very unique environment. Most of it is raised off the ground so the wind rushing under the building helps cool the structure. Hot air can also be directed up and out of the structure.

Swen was an amazing client with incredible trust to take on the project, to actually go through with it, and then get consumed by it. It was an organic process that lasted 5 years to build.

I initially designed the interiors with my wife Yelda Bayraktar. The idea was to have most of the furniture built-in, much like a nest would be. This would then be accentuated by a few great pieces that bring in modernism. The perfect example of this is the sunken lounge which has become the heart of the nest where everyone congregates. The interiors were taken to completion by Maybe Corpaci.

The swimming pool is placed where there was originally a group of Zebra dust baths, a nod to their existence and cohabitation of the area.

The animals have become quickly accustomed to the structure and the life that exists in and around it. The Zebras have been known to join guests at the outdoor movie theater to enjoy the odd movie. They are particularly fond of Madagascar. And surprisingly the local troop of baboons has resorted to observing with interest rather than destroying out of curiosity which is their normal behavior.

It is totally off the grid with its own water supply and a complex solar and battery power unit. It’s a combination of the very handmade and vernacular architecture using the latest green technologies to make it possible and comfortable. Unfortunately, there is a cellphone. 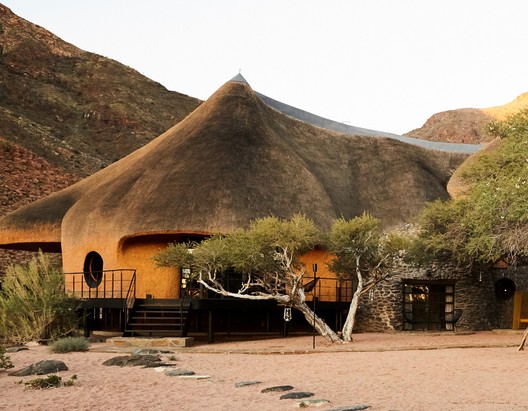