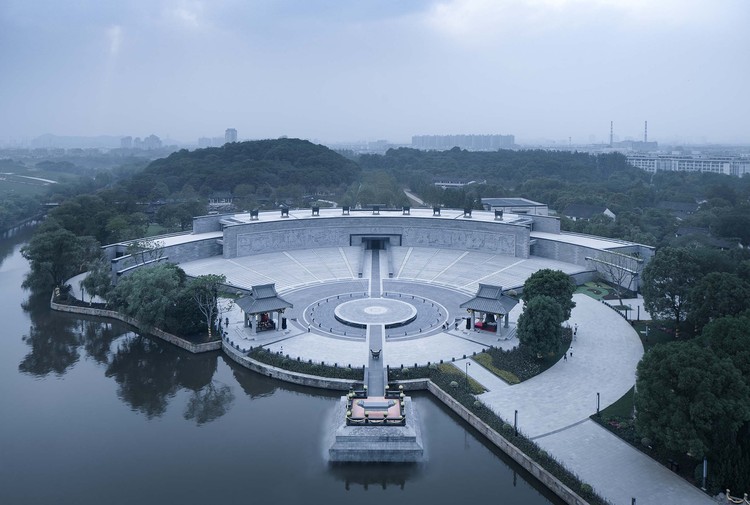 Text description provided by the architects. The Great Yu Mausoleum is located at the foot of Kuaiji Mountain, six kilometers southeast of Shaoxing, covering an area of 245mu, backed by Kuaiji Mountain and facing the Great Yu Pool, beautiful and majestic. Great Yu is the ancestor of the founding of China and an ancient hero of water control. The Great Yu Culture is one of the important cores of Chinese civilization and an important pillar of national cultural self-confidence, which has been admired by later ages and accompanied by endless sacrifices in various dynasties and generations. The Great Yu sacrifice rituals have been going on for 4,000 years since the beginning of the Xia Dynasty and handed down from generation to generation and continue to this day; and it was upgraded to a state-level sacrificial activity in 2007 and is scheduled to be held every year during the Grain Rain season. With changes and developments of the times, the Scenic Area needs to open up new spaces to assume more social responsibility and greater expectations of the masses.

The goal of the Great Yu Mausoleum Scenic Area Reconstruction, Expansion and Upgrade Project is to sort out the entire spatial structure and improve the functions of the Scenic Area, thereby promoting the eulogy of the Great Yusacrifice culture, so that people can more truly perceive, recall and pay tribute to this Chinese ancestor in the natural and human landscape.

The spatial layout of the Great Yu Mausoleum Scenic Area after design adjustment is divided into six nodes from west to east. The main entrance of the Scenic Area is reorganized on the basis of retaining the original gate: The new double-story stone lattice gate and the visitor center inspired by the "hip roof" palace structure in the Xia Dynasty, coupled with a large parking lot, form an integrated entrance operation service place.

The Jiulong Altar is carried out a space expansion, with its diameter expanded to 38m and its height increased to 6m, strengthening its appearance to match the upgraded scenic area.

The second half of the spirit road turns to reformation: In order to make the overall layout more in line with the traditional emperor mausoleum system, the central axis of the spirit road is reformed to make it on the same axis with the Luoshu Terrace, the Water Altar, the Great Yu Mausoleum Monument, the Hall of Fruition and the Great Yu Statue, thereby being more suitable for the ritual system of sacrificial buildings and constituting a true mausoleum for worship of Great Yu.

The Jiyu Pavilion is connected to the spirit road to the west, at the end of the latter a bronze monument of 7.2m x 10.9m with the character "Yu" is seen in the middle of the west facade of the pavilion, on the top of the pavilion there are nine uniformly distributed tripods symbolizing the merits of Great Yu, and there is a Great Yu Idol far away. The Jiyu Pavilion forms an artificial barrier through a number of concentric and symmetrical thick curved stone walls, enclosing an independent and solemn sacrificial space, which enhances the mysterious and ritual sense of the sacrifice road. The Jiyu Pavilion has more functions embedded in the curved walls with a strong sense of form, including the Waiting Room, the Rehearsal Room, the Lounge, the Media Release Room, etc. The facade of the curved wall is mainly made of high-grade dark black granite with a thickness of 250mm, and the stones are vertically laid in a dried way, being more stable and heavy compared with the traditional dry hanging curtain walls; and furthermore, the fire, washing and polishing treatment techniques are used to make the stone hues show three depths, thus paying tribute to the Xia Dynasty's black-advocating culture in color and texture.

The Jiyu Square is surrounded by the ring-shaped Jiyu Pavilion and accessible by visitors through bypassing the Jiyu Pavilion in the end of the axis along the spirit road. For geomantic omen of the emperor's mausoleum, the positions of the original Bell-drum Pavilion and the Water Altar in the center of the original square and on both sides remain unchanged, but the original Tai Chi Terrace in the center is changed to Luoshu Terrace, being more in line with the Great Yu culture. The radius of the square is expanded to 66m, and the capacity for viewing and performance of the renovated square is upgraded from 1,000 persons to 10,000 persons. In order to establish a more comfortable sightlight between the spectators and the performers during sacrificial rituals, the stand is raised in a fan-shaped stepped system, rising and spreading outwards to echo the concentric ring-shaped Jiyu Pavilion, as well as centripetally concentrating and sinking to form the round Luoshu Terrace. During sacrifice, the officiant needs to wait at the Jiyu Pavilion,walk out from the channel in the middle of the inside, cross the Luoshu Terrace in the center and reach the Water Altar after 6 steps for relevant sacrificial rituals. The Great Yu Mausoleum Monument, the Hall of Fruition and the Great Yu Statue are all located at the end of the axis, which should be given priority in renewal and protection.

"The contributions made by Great Yu protect farmland from flooding and bring benefits to future generations". The Great Yu Spirit, as an important source of national spirit, manifests the roots and soul of traditional Chinese culture. The Jiyu Square, as a new work in the essence and historical context of the Great Yu Mausoleum space, does not advocate free creation but focuses on rewriting under the premise of reviewing the historical text. It will balance heritage conservation and scenic renewal, shape a monumental space with a mix of history and modernity and complex functions, enrich people's spatial experience as well as guide visitors to deeply feel, think and convey the spiritual essence of this place. This kind of power will always be condensed, inherited and promoted, and will live on for a long time. 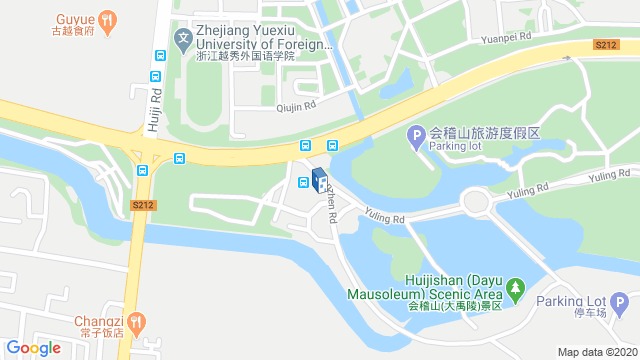 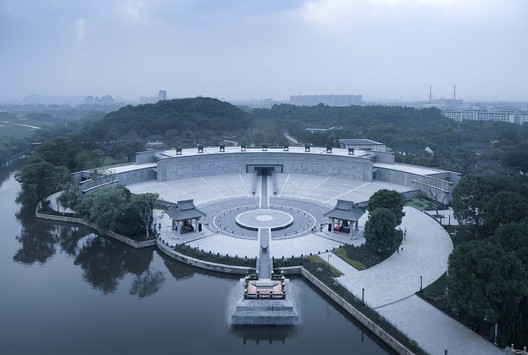