Save
Three Energy-Efficient Glass Facades That Work
Share
Or
Copy

Since the moment the first all-glass building was proposed by Mies van der Rohe, architects have sought the perfect façade. A well-designed façade system is often the difference between a mediocre and a spectacular design impression. Budget, aesthetic, and performance constraints require careful balancing. While every project is different, developing a decision-making framework greatly simplifies the process.

To explore this process, we will examine three case studies about strikingly different facade strategies selected based on project constraints. For ease of differentiation, the three strategies are classed as “Duplication,” also known as double façade, “Extrusion,” for overhangs and fins, and “Integrated Glass” referring to integrated film, coatings, and frit patterns.

The most notable design feature is a striking façade that breaks traditional expectations for cost-conscious academic facilities. The architects explored iterative massing design options to select one that responds well to the master plan but has significant exposure on the west façade. Design, urban context, and master planning considerations are critical factors when selecting a building massing and orientation. No amount of high-performance simulation can overcome a poorly designed building.

Knowing the constraints in real-time during the design process is critical to successfully achieving the design intent. By utilizing early-stage modeling, the team realized in the schematic design phase that if they were to going to move forward with the selected massing, they would need to reserve additional budget for glare reduction strategies on the west exposure. By using simulation, they were able to effectively optimize those design moves to keep the project under budget and on time for delivery.

As seen in the holistic glare map above, the Annual Solar Exposure (ASE), or glare, is high on the western exposure, to the extent that parts of the floor plate become intolerable. The ASE is measured as the amount of the floor plate that experiences over 1000 lux for more than 250 hours in a year. This is an effective way of measuring glare, as it is caused by high-intensity light hitting your eye. Large amounts of glass also lead to heat gain challenges in this muggy coastal climate. To overcome these constraints, the team tested a range of shading strategies, including vertical fins, horizontal overhangs, and double facades.

Here are some of the studies conducted in the façade feature within cove.tool to rapidly test different options. Since the project team could receive instant feedback, they were able to move ahead decisively, avoiding time-consuming rework and ultimately making the project more profitable for the firm. To reduce glare and add dimensionality to the facade aesthetic, the design team wanted to utilize overhangs and was able to determine the precise depth of the overhang based on the facade location by running quick studies as shown below.

At 300,000 sq. ft., the Health Sciences Research Building II is the second phase of a new biomedical research facility designed to foster a collaborative research community. The low energy lab building is designed to use approximately half as much energy as a standard lab building with a similar program. Built on a tight site, the HSRB II massing was limited in possible building orientations while fitting the program area as well as responding to the site and the existing buildings on the campus. The owner, Emory University, had already performed a feasibility study where the architects studied every possible massing scheme on the project.

HOK’s design team (from the Science and Technology Studio in Atlanta), started with the goal of maximizing glazing exposure on the north to allow indirect daylight. In most of the northern hemisphere, north facades are ideal for bringing in useful daylighting without the risk of glare and excessive heat gain. While the building’s massing and orientation were optimized, keeping performance, circulation, zoning, and the context in mind, there were facades and program elements that faced the southwest exposure. When studying the holistic daylight and glare, it was clear that the southwest offices (punched openings) and southwest labs (curtainwall) had a high glare exposure.

Known for their iterative design process, the design team created over ten different facade scenarios to understand how to address the heat gain and glare on the southwest façade, while balancing the budget and aesthetics.

As seen in the diagram above, the design team considered varying iterations of frit patterns to find the optimal balance between glare and daylight. The challenge with frit patterns can sometimes be their ability to reduce the amount of daylight penetration in the space. Rapid prototyping allowed the team to test varying frit percentage along with balancing out the frit color.

In addition to studying the southwest façade for the lab program elements, the project team also studied the punched opening part of the façade for the office program. Two varying studies were conducted because the different programs require individual strategies. As an example, the lab areas were to be integrated spaces within individual interior shade control, but the offices were going to have interior blinds. Despite having interior blinds, it was critical for the fixed exterior shading to reduce most of the glare so that the shades would not need to be down throughout the day (which would also block the daylight). The glare strategies tested for the punched openings followed the design aesthetic of overhangs, fins, or some combination of the two. Data helped the design team determine the precise depth, spacing, and orientation of the extrusion for maximum daylight with the lowest glare, while meeting the budget targets. 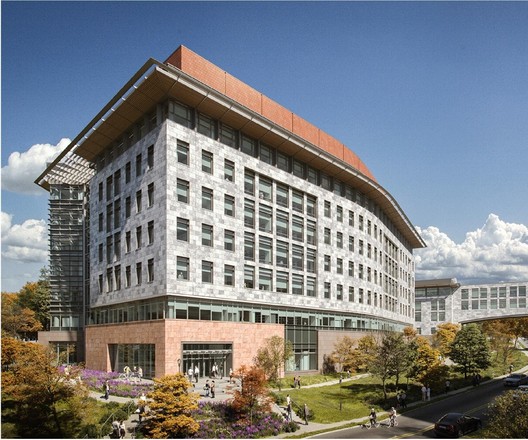