Romania's modern architecture merges global perspectives with local traditions. From pre-modern styles to post-revolution work that began in the early 90s, the country's built environment is incredibly diverse. From cities like Bucharest to Cluj-Napoca and Timișoara, modern projects are being designed between historic structures. 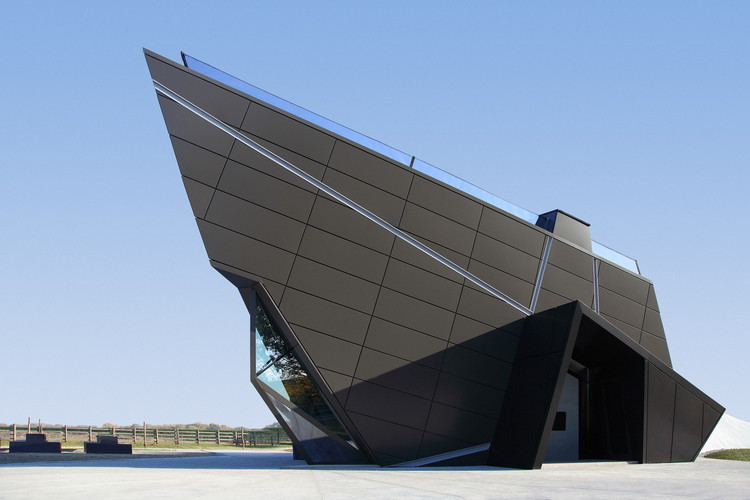 Sited at the crossroads of Central, Eastern, and Southeastern Europe, Romania's architecture is defined by its location. Equal parts mountains, hills, and plains, it is home to one of the largest areas of undisturbed forest in Europe, and the country's architecture is a response to its temperate, continental climate.

Home to eight UNESCO World Heritage Sites, Romania has a range of castles, churches and cultural landscapes that paint a picture of its development. Zeroing in on the country's cultural projects, the following buildings showcase contemporary designs built within the last decade. The projects balance larger, global influences with traditional approaches to craft and construction.

The project is the result of the Waiting for Revival Competition organised by the Transylvania Trust Foundation aiming to transform the spaces of the castle into workshop areas and one multi functional hall. The brief required not to intervene onto the existing historical structure in order to carry out a full restoration at a later date. Consequently, the design was conceived using a set of independent installations.

Tara explores the sensory perception of the environment and communicates with the symbolic and natural language of the elements. The structure is set on the border between a forest and an iconic open space in the Southern Carpathian of the Tarcu Mountains in Romania. The structure designed and built in ten days, with a team of 32 people coming from different countries.

From a 1930s villa, typical of Bucharest’s fabric, the architect Youssef Tohme took explored the architectural function, as well as the symbolic and urban function. Erected on a glazed base, the design was made to be open to the public, and the reproduced house simultaneously becomes a museum piece and a statement to the city and to culture.

The Cultural Palace was designed in the year 1930 by the Bucharest architect Victor Smigelschi, and its primary purpose was to host ASTRA Cultural Association’s events. With the benefit of historical research and with technical expertise it was decided that the spatial and functional design concept of the building, which was now a ruin, would follow the initial project. That decision meant that the alterations that were made in order to accommodate the later institutions had to be removed.

Gergely Sági wanted to create a project where locals can relate to the small constructions by their village. As noted for the design approach, if the villagers are able to accept them, and the community is able to look at them as their own and feel responsibility for them – in this case the pavilions can last the time they were constructed for.

This independent theater was positioned on a site to help revive the urban area. The start-up for this project was the pixel (POINT) concept. The team used the pixel as a unit of measurement (module), thus generating a series of modular and multi-functional objects that helped create flexibility. These ended up enveloping and visually unifying the whole space, while also separating and outlining certain areas.

This building represents Romania’s first permanent digital museum. Inside, visitors can explore any museum of the world through the use of the latest technology in 3D video projections, 3D screens, touchscreens and so on. A big advantage is that the museum can host any presentation, exhibition or vernissage and that the visitors can effectively inform themselves about the environment, local traditions and history without the need of a very large space.