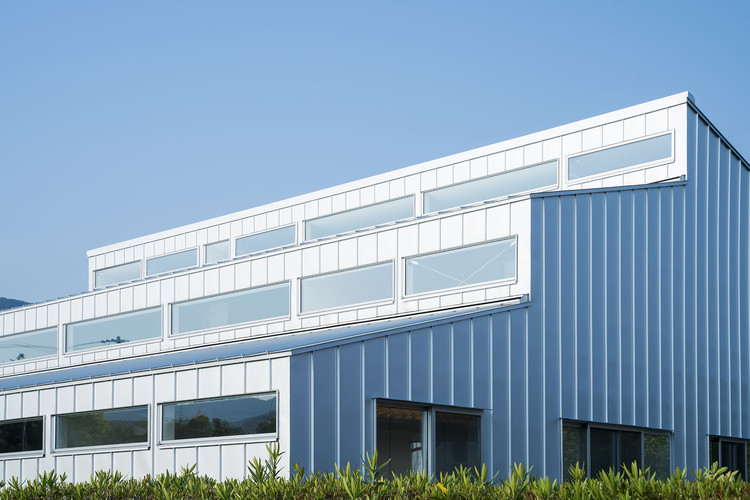 Text description provided by the architects. This project took place in northern Hamamatsu, over a duplex house for two families ―the mother and her son’s family― standing on its own in the midst of an industrial district lined with a number of factories. One of the two families was represented by the mother and nobody else, and the other: her son, his spouse and four children.

We were required to work out an arrangement for this unbalanced inhabitant ratio as well as secure an open space for the families to get together. Along with the physical limitations of the site impeding reclamation of the external environment, we deliberated on the openness of the internal space and control of light.

Soft light and openness generated by closeness - In consideration of the ambient surrounding, we ensured privacy by keeping a fixed distance from the outside space. Meanwhile, clerestories gather plenty of light and its soft reflection on the wall surface permeates throughout the space. Closeness and openness are two contradicting elements at a glance, yet we pursued the cohabitation of the closeness of sense of protection from the outside world and the openness of the diffusion of light. By having these two opposite elements live under the same roof, we were able to achieve tranquility and extensiveness for a pleasant space embracing the big family.

Appearance that blends in with the surrounding - We assigned each of the three blocks produced by the zigzag structure a function: “for the mother”, “sharing” and “for the son and his family”. The simple dimensional structure design created space for clerestory while protecting privacy, extensive living space and large-volume underfloor storage and dedicated the second for to the son and his family. The uneven roof created multiple clerestories, resembling the iconic appearance of the factories in the neighborhood.

Tatami mat and polycarbonate - The entire floor of the shared living room is lined with tatami mats. The shared living room has six entrances connecting to other rooms and a spiral staircase connecting to the children’s room on the second floor which make the living room the epicenter of the house where different scenes of everyday life are met. Inhabitants could have just bypassed this space with wooden flooring or floor covered with some hard material; the tatami mats invite the families to sit, lie down, or be in whatever position they may feel comfortable with. Unexpected stay in the living room would produce natural interaction among the family members.

The polycarbonate adopted for the wall surface of the living room transmits soft light to connect the spaces, creating a comfortable distance between the families at which they are able to enjoy their private life while feeling each other’s presence. This inventive combination of tatami mats and polycarbonate enhances the unique extensity of this duplex housing and helps conjure up interactions and interrelationships among the family members. 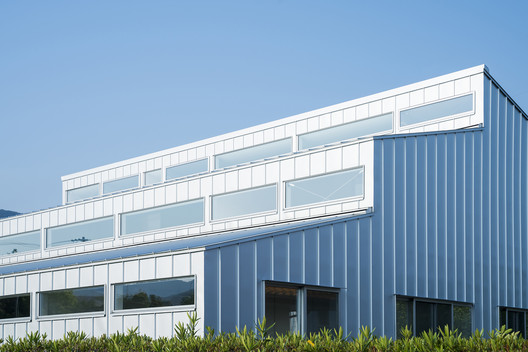