Save
Extension of an Old Family House / Architekti B.K.P.Š 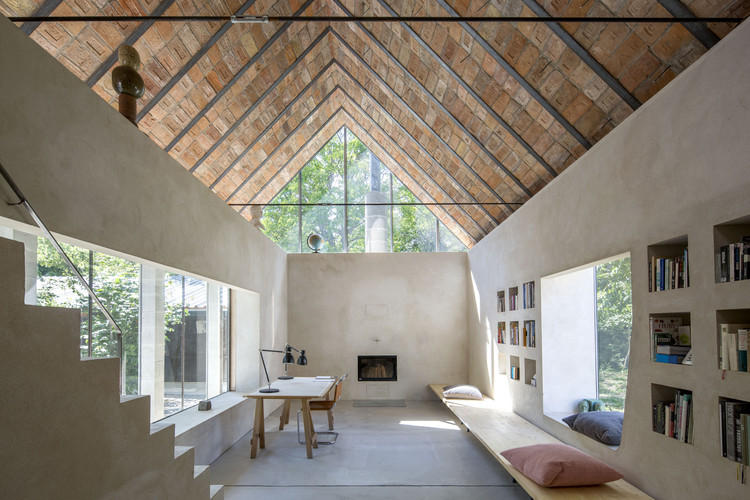 Text description provided by the architects. The extension is part of a set of buildings on the site of a former village brickyard. It is added to the existing house of a former brick master – this house was restored in the mid-nineteens. The brick kiln, which was in a ruinous state, was rebuilt into a studio 10 years ago. After WWII, when the production of bricks was closed, an orchard was set up on the site.

The original brick master´s house was a typical portico country style with a pitched roof. Portico's house was actually a wise scheme – as vernacular houses used to be. Portico attached to the longitudinal main volume was a distinctive and practical feature on the interface of the exterior and interior of the house. Apart from the natural protection of this frequented zone, it regulates different effects of summer and winter sunshine energy on the mass of the masonry.

The extension is actually a prolongation of the silhouette of the existing house inclusive its portico. It subordinates to the existing cross-figure, but inside it is a radically different space concept. It is an open space scheme without the usual ceiling separating the living area from the attic. The new living room of a modest floor area is equipped with generous space experience.

The roof truss could be interpreted as a scheme of typical rafter construction or as a structural scheme of two mutually supportive sloping slabs. All the bricks used in the roof truss are marked after their origin. More than 2/3 had been manufactured by this former brickyard, the rest originates from the vanished brick kilns of the nearby region.  The decorative mosaic-like appearance of this roof truss is derived from different shades and ragged surfaces, which are typical for handmade bricks production. Empora gallery is inserted in the dividing line of the existing house and its new extension – it serves as a connection to the existing attic.

The walls made of brick blocks are outside and inside plastered with classic lime plaster without top coating. Other materials of this extension are also left without further surface treatment – concrete of the floor and of empora, precast concrete blocks of the portico columns and of the chimney, steel beams and profiles, etc. In a certain sense, it is a finished-unfinished building.

Massive roof truss structure improves substantially the accumulation characteristics of this building. It does radically reduce the thermal fluctuation in the interior, which is a classical difficulty of the usually constructed roof trusses. Closable glazed portico serves as a buffer climate zone for most of the year. This extension is a particular homage to the culture of a craft of brickmaking. 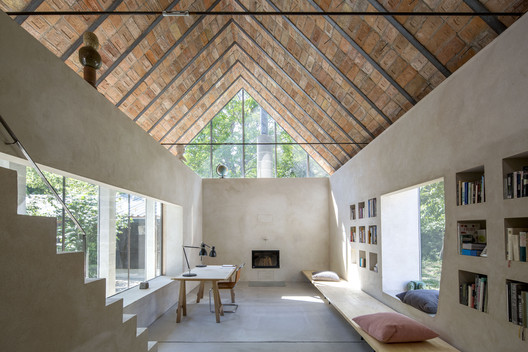