The dialogue with history is certainly one of the most exciting topics for reflection that a designer may approach. Among the several academic and post-graduation courses, YACademy is certainly one of the most prestigious contexts within which designers may explore the topic of history and past architectures. Located in the historical heart of one of the oldest and most important Italian cities, YACademy offers a refined specialization program in "Architecture for Heritage". Now in its third edition, the course offers the opportunity to discuss the topic with some of the most refined design firms, with the likes of Alberto Veiga, Kazuyo Sejima, David Chipperfield and Benedetta Tagliabue.

The course offers many lectures and excellent internships; it is made of a program including lessons and workshops and embodies a reflection opportunity on the historical design. The study of the utopias of modernity and an attempt to re-actualize them was -within the 2018 edition- one of the fascinating paths that involved some students at the end of the course. Through the exclusive collaboration with the MIR -Norwegian artists authors of some of the most suggestive images of virtual architecture of the last decade- the students were able to reflect and update one of the most visionary utopian visions of the modern period: the "aereal restaurant" by Norman Bel Geddes.

Here follows a focus on the project made by Sara Donato, a former student at YACademy.

There are out-of-the-box projects that are totally beyond any convention. In such projects, architects pushed the use of materials to the limit, explored new ideas and challenged conventions by paving the way to the future. What stopped them at their drawing tables was politics, structural difficulties, the lack of funds or too cautious clients who preferred to carry out traditional projects rather than investing in visionary ones. We will go through some of these visionary architectures reinterpreted by some of the best renderers in charge and inserted in a modern context. Specifically, we will delve into Étienne-Louis Boullée’s Bibliothèque Nationale and the Aerial Restaurant by Norman Bel Geddes. Both of them were made immortal by their pure architectural shape and their classic style. Despite this, none of them was ever built.

The architects of the modern movement used to focus on functionalism. They used materials such as steel and glass to design buildings and new cities. Norman Bel Geddes’s work aimed at developing appropriate shapes that could meet the needs of their inhabitants. Indeed, the tapered lines of the aerial restaurant that Bel Geddes presented at the Chicago Exposition are grounded in functionalism.

Norman Bel Geddes was an architect, a designer and an art director. He had a very clear vision of the future, where technology would play a fundamental role with its new materials and shapes. ‘There are no doubts. Architecture is about to be affected by a new dynamism: it can become bubbly as tabloids, talkies or variety shows’.

In the 1933-1934 Universal Exposition in Chicago Bel Geddes tried to make dining rooms as spacious as possible, especially inside the exhibition areas where the restaurant choice is usually limited. Their shapes and appearance mattered but they also had to be functional for the staff. They had to be equipped with well-designed kitchens, spaces and proper facilities. Meals had to be entertaining also thanks to the architecture of the restaurant.

The most surprising space had to be the Aerial Restaurant. It consisted of three superimposed semicircular storeys. They had to be suspended at the top of a tower and to overlook the exhibition site. This design would avoid a continuous shadow projection on the glass windows in the lower levels and would offer clients a light and shadow alternation. The whole facility had to be as high as a 25-storey building. Its most modern characteristic would have been movement: the restaurant would slowly revolve offering different views.

Just above half of the tower, the first floor would host a restaurant and a dance floor for six hundred people. The intermediate-floor restaurant would have served light refreshments at affordable prices and accommodate up to four hundred people. At the top, there had to be a smaller high-end restaurant with no more than two hundred seats. Kitchens would have been located in the basement.

For dish serving Bel Geddes designed nine dumb waiters to be added to three elevators for visitors. How to furnish such a technologically advanced building in order to make it even more inviting? No interior design effort was necessary because the facility was already intriguing, as a piece of plain architecture. The aerial restaurant aimed at having the same impact on the public as the previous Crystal Palace in London in 1851 and the Eiffel Tower in Paris in 1889.

However, the financial funds for the exposition sharply declined and suddenly in 1929 the Wall Street Crash took place. Moreover, it is believed that there were prejudices towards the designer: the world of architecture was suspicious of Bel Geddes because he was not a professional architect. He was an industrial designer, a teacher, but he did not have the necessary requirements to work as an architect. Several members of the board, leading architects as Raymond Hood and Frank Lloyd Wright supported his ideas. However, they did not prevail.

Nowadays the aerial restaurant is known thanks to the photographs of the plastic model that Maurice Goldberg made. The legacy of this project lives on in other futuristic facilities specifically in some revolving restaurants such as the one that brought fame to the BT Tower in London or the one in Ala Moana Center in Honolulu, both dating back to the Sixties. The buildings were built to be motionless, but the idea to make them move was never abandoned. 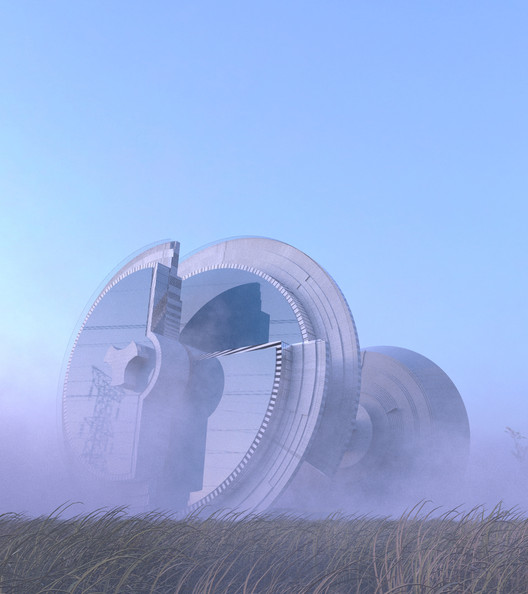