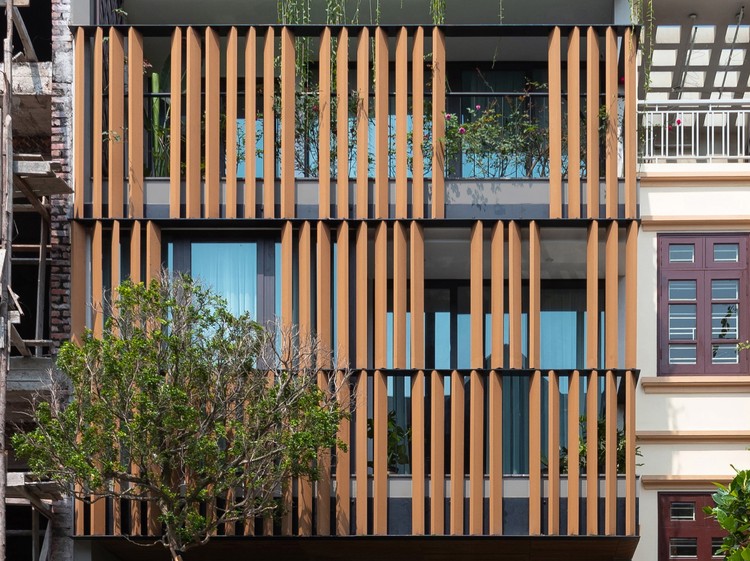 Text description provided by the architects. Urban Issues. Semi-detached house in the new urban area is very popular type of house in Vietnam. Although restrictions of designing un-follow to planning in the split plot house, the new urban areas are now becoming soulless with old, poor, repeated architectural with layout "stairs between divided" which is out of date. The construction of a new house in the current urban area. Besides, the house will met modern standards with the breakthrough in spatial structure, creates a harmonize architectural in the whole.

Location Site Situation. The house is originally a semi-detached house, façade facing to the West, with 2 sides to access to light and natural wind in front and behind the house. The renovation solution given to the project is to prioritize to open up to 2 open sides, ensure maximum lighting and ventilation for the house. The open spaces are all directed to the trees. The façade of the West borders with wood lamination system, in addition to reducing solar radiation, also playing the role of shaping the building. The front garden has been raised to create space below to make a garage for the family, playing a role in reducing radiation, dust and urban noise.

Space Expansion. The basic spatial structure of a normal tube house is often in the form of: a staircase acting as the main traffic axis and the remaining useful space will be evenly distributed to the front and rear of the home. This structure is simple, easy to duplicate, but when placed in specific situations and requirements of the host will not fit due to its boredom. Because the tube structure is often narrow horizontally, expansion or contraction of space will take place in height to increase the interest of the house.