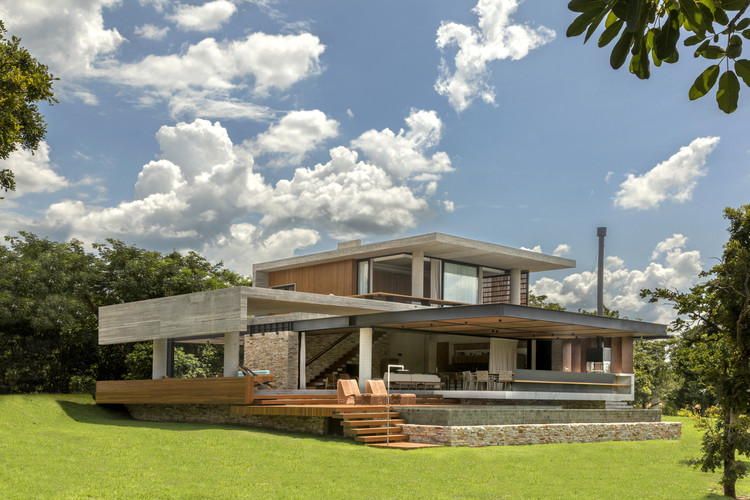 Text description provided by the architects. This project came about in the office commissioned by a young businessman, without children, fond of travel and modern architecture. The client challenged us to create a cinema house, literally, because he brought us as a reference a photo of a residence used as a location in a science fiction film. Challenge given, challenge accepted !! A lean needs program, very atypical, but proportional to the client's time of life, gave the premises for the design of the project. Volumetry is marked by the intersection of three volumes, which intertwine creating spaces according to their hierarchy. The plans formed by the prestressed slabs show the movement of architecture, defining the areas of permanence - seating on the balconies and gourmet space, in addition to marking the walk that circulates the main volume.

The metallic structure fills the meeting between slabs (ground and upper) creating an element with an important balance, which turns into a pergola, shading the region of the barbecue and pool balcony. As a result, the front façade gains a bolder and more fluid character at the same time, generating lightness to the whole. This same metallic element forms the space of the covered garage, located at the rear of the house. The whole set faces the most privileged part of the land, where the view is totally favored, even though the face with the least favorable solar orientation, towards the North.

Citing the environments, we have on the social floor - ground floor - a multipurpose room where living, kitchen, home theater and wine cellar are fully integrated and connected to the balcony through sliding panels, which are collected inside the walls, generating 100% opening.

On the upper floor, a large suite behaves as the main environment with a large closet and two more bathrooms (Mr bath and Mrs bath) completing the floor. Facing the bedroom, a large terrace, with the protection of a sunroom, serves as a contemplative environment for the skyline of the city of Goiânia.

The materials used in this project help to mark the architectural plans and volumes following a very characteristic language of the office. Slatted concrete, slatted wood, slabs of rough stone and steel, as well as a lot of glass in the frames form a unique, harmonious composition, which mimics its beautiful natural surroundings. 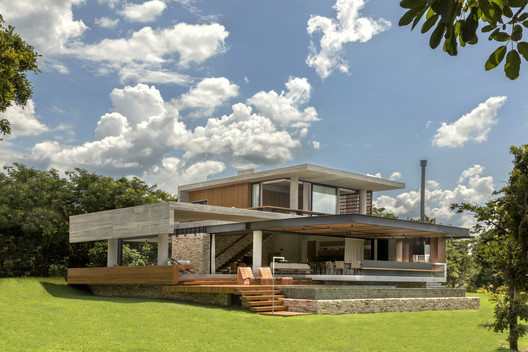