Save
How Neon Lighting Shapes Architecture
Share
Or
Copy 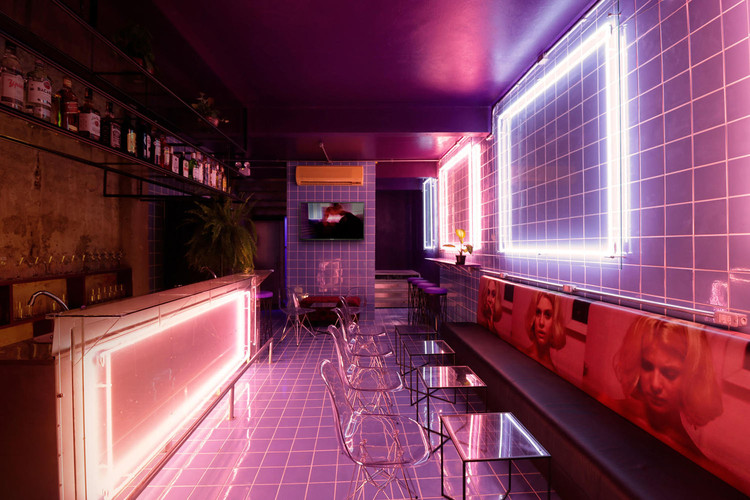 Neon lights are a bold, cosmopolitan statement that can easily revitalize or accentuate an architectural space or structure. With eye-catching brilliance, a plethora of color options, and ties to a retro aesthetic, these lighting pieces can make a space feel simultaneously modern and nostalgic. Yet few understand the scientific workings or material properties of neon, and many architects neglect its use due to its narrow association with commercial signage. Below, we explore how neon works, its architectural history, and how architects can continue to use it today.

Neon gas itself was discovered in 1898, and was named after the Greek word “neos,” which meant “the new gas.” A rare noble gas that is colorless, odorless, and inert under standard conditions, it emits an orange-red glow when placed in an electric field, lending itself to use for colorful lighting.

The first neon lamp was thus invented by engineer and chemist Georges Claude in 1902, and was first displayed to the public in 1910 in Paris. It is created by first shaping hollow glass tubes, which can be made in four, five, and eight foot lengths. Then, the tube is partially evacuated of air, a high-voltage electric current is passed through it, and neon or another gas is inserted and activated by the current, emitting light. Different colors are attained by inserting different gases or by applying different tints and phosphor coatings to the glass tubes. For example, mercury discharge tubes produce blue, rather than neon’s orange, light.

In 1923, Georges Claude and his company Claude Neon introduced neon signs to the United States, sparking an era of neon ornamentation that would shape the aesthetic of American cities. It quickly became associated with outdoor advertising, becoming an especially indelible part of the movie theater experience. American advertising executive and lighting designer Douglas Leigh was a pioneer of this transformation, with neon artist Rudi Stern writing that “Much of the visual excitement of Times Square in the thirties was a result of Leigh's genius as a kinetic and luminal artist.” Neon lights were also used heavily in the Chicago Century of Progress Exposition of 1933 and the 1939 World’s Fair in New York, and neon signage in particular later became an integral part of the beloved Las Vegas aesthetic.

The influence of neon, however, was not limited to the United States – having first been revealed in Paris, neon lights were adopted initially by Paris’ cinemas and nightclubs, while in the 1960’s, even the Soviets ‘neonized’ the Eastern bloc capitals in reference to neon capitalist metropolises. Neon lights similarly developed in China in the 1920’s, and indelibly transformed the skyline of Hong Kong in the mid-20th century. These signs combined ancient Chinese calligraphy with modern commercial aesthetics, using cultural and narrative symbols as well.

From its early history through the present day, neon has thus been deeply associated with modernity, a cosmopolitan lifestyle, and an atmosphere of vitality. Architects today can continue to use neon signage to invoke this milieu, whether through words, symbols, or abstract designs. To this end, neon lights pair well with sleek, modern interior design, such as in the images below of LYCS Architecture’s Mylines Hotel. The right symbol or phrase combined with the right complementing interior can bring the energy and vitality of the city even into a private room.

Yet with such a strong historical association, invoking the nostalgia of the early 20th century and precious cultural symbols such as the old movie theater, Times Square, and Las Vegas, neon has even more potential to create an atmosphere extending beyond that of modern city life. Paired with exposed concrete, rustic bricks, and plants, neon signage can generate a beautiful retro ambiance that takes customers back to a different time while still feeling current and new. Interiors that use neon signs in this way are among the most memorable for the highly distinctive aesthetic that they create.

Yet because neon is so fundamentally associated with signage, which can feel limiting or kitschy for some architects, it is often neglected. Rudi Stern writes further that “Unfortunately for many architects, neon is the last shoddy pink ‘pizza’ sign they have seen, and they summarily reject a medium that offers great promise as a spatial and environmental element.” Thus, despite its historical and commercial associations, neon has the potential to be even more than retro symbols or cosmopolitan phrases. Abstract designs, atmospheric colors, and the kinetic properties of light combined can completely alter a space even without references to a historical aesthetic or explicit messages. In the images of the With.It Home below, BodinChapa Architects have used neon in a non-representational way to create a stunningly memorable James Turrell-esque room that is simultaneously tranquil and radiant. Neon light has the power to completely transform a room even if used in as simple a way as lining the corners of the ceiling, due to the unique properties of light in conversation with the sense of space itself. If architects can move past its commercial associations and investigate its relationship to architectural space, neon can become an even more powerful atmospheric element than it is already. 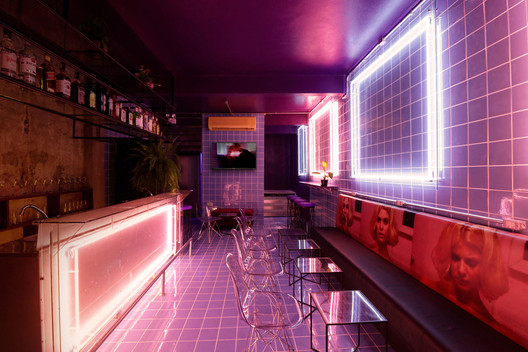