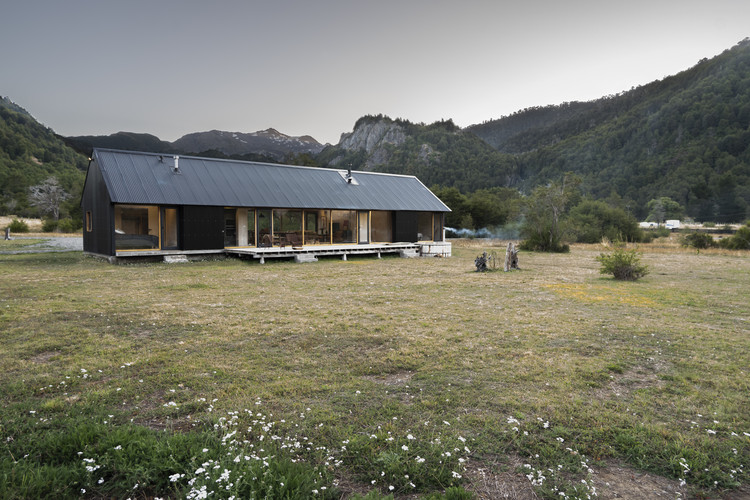 Text description provided by the architects. Conceived as a holiday shelter close to Corralco ski resort, the house stands on a flat lot, in the middle of a valley surrounded by forest-covered hills made up of araucaria, lenga, and other endemic species, with distant northwards views of the Lonquimay volcano and of the Sierra Nevada southwards.

The house was designed promoting the meeting, the social life, and the contemplation of the landscape, through a large central and double facing space (north and south), where the living, dining room and kitchen are open plans arranged. Private areas take the background in two separate wings at the east and west ends of the house, one for homeowners and one for guests. Each wing contains two bedrooms and a bathroom. The elongated bar plan and the gabled section allowed solving programmatic and climatic aspects, such as achieving greater span and height in the central space or a proper evacuation of rain and snow during winter. The exterior skin, completely in corrugated metal, allows it to open or close gradually on its main facades, controlling the input of sun and heat and also allowing full shielding when the house is not being inhabited, when it becomes a rotund silhouette in the landscape.

Given the aggressive location in terms of climate and accessibility, a single, compact volume containing the entire program was chosen, with a simple, single-section structure and repetition of parts, which could be largely prefabricated in nearby cities of Temuco and Curacautín, reducing the in situ construction and costs.