Save
Floodwaters Threaten Once More The Farnsworth House
Share
Or
Copy

For now, all is calm and the Farnsworth House appears safe as the Fox River flood waters recede. As we exhale a collective sigh of relief, we also understand that there is more rain to come. This is not the first flood, nor is it the last, but we are monitoring the forecast very closely and are ready to act. . As you swipe through the slideshow, you will travel back in time and see photographs of the house’s encounters with past floods. . Visit our website for a slideshow of current photographs and read the letter from Executive Director, Scott Mehaffey. . 📸(1. 2020, 2. 2013, 3. 2007, 4. 1996, 5. 1974, 6. 1949). . #farnsworthhouse #farnsworth #savingplaces #thisplacematters #nationaltrustforhistoricpreservation #ludwigmiesvanderrohe #miesvanderrohe #mies #edithfarnsworth #planoillinois #foxriver #iconicarchitecture #architecture #modernarchitecture #modernicon #moderndesign #calmbeforethestorm

Owned and operated by the National Trust for Historic Preservation, the Farnsworth House is threatened again by floodwaters, as heavy rains hit the Chicago area. Although the water, later on, dropped below floor level, and the terrace resurfaced, the danger of flooding is still high as the forecast is predicting more storms for the upcoming weeks.

Completed in 1951 and created initially for Dr. Edith Farnsworth, by architect Ludwig Mies van der Rohe, the house has faced similar challenges before. The weekend home located in far southwest suburban Planon has been inundated in 1996. At that time, the water broke the house’s plate-glass windows and flooded the interior space, carrying valuable artwork into the river, drenching carpets, and flipping furniture.

Lifted on stilts above ground, the architect is said to have taken into consideration the stream's possible movements, examining “the river’s high-water mark on a nearby bridge”. Nevertheless, suburban development has left the watershed less permeable, raising consequently the risks of flooding. The National Trust for Historic Preservation has suggested putting hydraulic jacks beneath the entire house, to raise it, but the plan was never executed.

On another hand, when Mies van der Rohe was confronted with the flooding reality, his answer documented in “Broken Glass,” by Alex Beam was simply: “we can combat that. It’s easy. You have a canoe there, and if it floods, you take the canoe to the house. It isn’t much. It’s an adventure, but that belongs to life.”

News Via The Chicago Tribune. 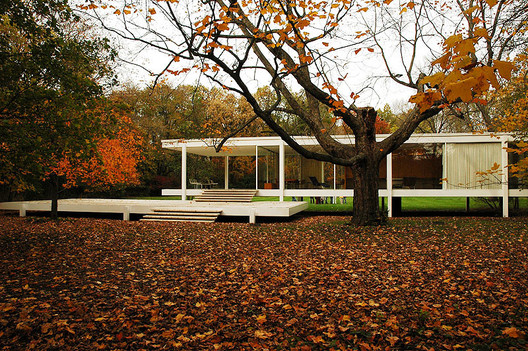