Save
“We Want to Build Our Own Utopia”: In Conversation with Dimitri Shapakidze of Laboratory of Architecture #3
Share
Or
Copy

Founded in 2006, by three partners – Dimitri Shapakidze, Irakli Abashidze, and Otar Nemsadze in Tbilisi, Georgia, Laboratory of Architecture #3 is known for such enigmatic projects as the Grove Design Hotel (2017), Mediatheque (2017), both in Tbilisi, and Visitor Center for Architectural Miniatures Park (2016) in Shekvetili, Georgia. Nemsadze left the partnership in 2011, to pursue his studies in the Netherlands to advance his independent career. In 2018, he co-founded Tbilisi Architecture Biannual and is currently undertaking his PhD at Tbilisi State University. The practice attracted attention from the very beginning. The partners’ first project was a private villa for a local entrepreneur and their hotel on Leselidze Street in Tbilisi was a result of a competition that they won in their inaugural year. After just six years since its inception, Laboratory of Architecture #3 was named the 2012 Best Architect of the year in Georgia. The current two partners, Shapakidze (b. 1983, Tbilisi) and Abashidze (b. 1984, Tbilisi) know each other since their childhood. They were neighbors and then studied at the Georgian Technical University in Tbilisi one year apart. They both worked for local architects while studying at the university and started their office right after graduation. The following interview with Dimitri Shapakidze took place over lunch at the Grove Design Hotel. 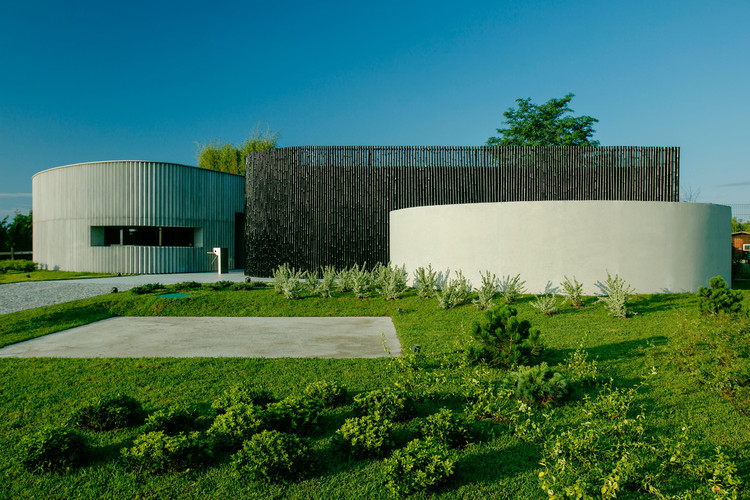 Vladimir Belogolovsky: Could you talk about the intentions of your architecture?

Dimitri Shapakidze: To us, it is all about synthesis. What we enjoy most is bringing many different ideas and things together. We often deal with opposites, whether in terms of material qualities or forms that strangely fit and yet, attract. It is that resistance, the spark, so to speak, that bonds and fuses things almost in a welding-like process. It is that kind of tension that we are after. We like using opposites, contrasts, and counterforces to achieve something spontaneous and radical. There are two ways to pursue projects – you either see the final result from the outset and you proceed toward realization right away, or you don’t know what you are going to end up with and you start by asking all kinds of questions. For us, it is always the later. We want to discover things. We are curious. We are enjoying the process and that’s why it is the synthesis that’s important to us. That’s the reason why we refer to ourselves as a laboratory. We are experimenting with elements, coming up with different chemical reactions. Maybe things will blow up in our hands and we burn ourselves! Perhaps, there is a big risk to fail, but we want to try to see what we can do, anyway. What we want is to discover something new.

As we are working our way forward, we look around and we are competing against many talented architects of our generation here in Tbilisi. Many of us play with elements – be it symbols of culture, history, politics, and so on. Many of these projects are attractive and cozy. Yet, we also see that some of these architects are working with things that are already proven and well known. They have become very comfortable with what they do and even know what is expected of them. We are not attracted to that. We want to reinvent things. We want to try things that we ourselves are not quite sure whether they are good or not. There are so many ideas. How will they be judged? Our way is this – let’s find out!

VB: You just used the word Synthesis. What other words would you use to describe your work or the kind of architecture you would like to achieve?

DS: Passion for design. For example, we love Archigram and its Plug-In City project. We collect design objects, especially of electronic nature and all kinds of gadgets, appliances, and devices. We see them as small-scale architecture. We learn from these examples – a shaving machine, a steam engine, and so on. We use these gizmos for our inspiration because we see architecture in everything. It is our passion. I think our generation is one of the last generations that is still able to create complete buildings from scratch. In the future architects will mostly add to what’s already there and will do projects collectively using the latest software and AI. There seems to be a decline in the importance of authorship. Another word and notion that’s important to us is ambiguity. We like questioning whether something is inside or outside, historical or brand new, soft or hard, and so on.

VB: You want to discover your own architecture, right?

DS: Yes, we do. We want to be free in our choices and we don’t want to depend on what we have done before. We want to reinvent traditions and expectations. We like to collide different forms, mutate them, in a way. We like things that are happening simultaneously. That’s the future. Our hands will be free, and our geometry will be free. This freedom is important. The freedom is in the fact that we don’t have to do things in certain ways. You don’t have to choose one or the other, it can be both. We like collages and colliding with other buildings. We don’t like buildings that are like islands.

VB: Tbilisi is a historical city. Yet, there are many contemporary interventions here, which come in striking contrast with much older structures. This brave attitude is embraced and celebrated here. Yet, it is hard not to notice a new trend – some local architects seem to be overindulging with history, even if it is very recent and not significant. They bring nostalgia into their work, which is more cherished than the freedom to design something from scratch that you just talked about. How do you deal with history in your own projects?

DS: I agree, and we also noticed many projects that seem to hide behind older structures with their cracks and patina of time. We try to stand on our own. We don’t need a zombie hand sticking out of the grave. History can be very seductive, that’s for sure. We know that because some of our clients ask us to be “familiar” to people.

VB: Could you give an example of that?

DS: We were working on our Platforma Design Hotel in the city center and our client asked us to be free on the inside but mimic a historical facade. We didn’t want to compromise, so we developed our solution, which was inspired by a famous music work, called Suite in the Old Style, Op. 80 by Russian composer Alfred Schnittke. It is 15 minutes long and for the most part, it sounds like a post-baroque piece, as if you were listening to Bach, very formal. But closer toward the end, all the familiar sounds begin to melt away to reveal contrasting electronic-like sounds of striking atonality. It is fascinating mimetic music of quotations, allusions, and impromptu techniques. The point is that surprising beauty could be achieved by transforming what is familiar to something entirely new and unexpected. We are trying to find what is relevant to our own time. So, in this hotel project, we did something equivalent. We started with a classical façade that’s being transforming into something entirely new in the most unexpected places. Is it an old building? Is it a new building? The whole thing is built from scratch. The entire façade is made up. Columns are not lined up with the actual structure. It is like Matrix – the reality is melting into a vortex. The building is our interpretation of the Schnittke piece and response to our client’s requirement. Of course, you will recognize this building as a contemporary work, but you need to pay close attention to details. So, if we absolutely have to work with history this is how we would approach it.

VB: In other words, the result may be contradictory, but it is your own and that’s what makes your architecture contemporary.

DS: Absolutely. With every project, we want to build our own utopia, our own future. When we work on our projects, we grab ideas from every bucket, every source. But everything gets transformed. When you see the finished building, you would not identify where ideas come from. So even if we are inspired by history, we would never quote it directly.

VB: Could you talk about your design process?

DS: We start with discussions by putting all the objectives that we want to express in the project right in front of us. We don’t care about how they look like or that they are radically different from each other, and we are not scared about how to proceed. It is a process. Ideas get crystalized. We throw everything in one bowl, and we know that something will inevitably happen there. That’s how we start, and we work as a team. We don’t care who came up with a particular idea. It doesn’t matter.

VB: Do you see yourselves as Georgian architects? Is it important to you? For example, in China, most local architects exploit their regional roots very explicitly. Here it is hard to tell. I wonder if such tendencies are purposely resisted.

DS: We are simply not preoccupied with such issues. For example, Peter Eisenman said that the only thing architects can achieve is a better architecture. In other words, architecture has nothing to do with pragmatics. We turn to poetry, literature, music, film, and so on, not because we want to solve problems, but because we want to rise above the mundane and the everyday. For example, Georgia is the land of conflicts, all kinds of conflicts. Dealing with conflicts is our context. We know our architecture will not solve them. As architects, we don’t want to support one particular opinion. We want to fuse them to show a possibility of synthesis and to offer an alternative opinion. Of course, conflicts are not unique to Georgia. We don’t think it is productive to be focused on regional issues, but it is important in some cases, to be contextual. Addressing specific context makes buildings more relevant to their place.

VB: Would you say you have your own agenda, independent of your clients’ briefs? In a way, you don’t start from scratch every time. You bring your own inquiry into every project, right?

DS: Yes, of course, we do have an agenda of our own. We are interested in exploring our ideas in a certain way. We both were teaching at the university, for example. Just working on projects is not enough. We have our dreams. We always work on our ideas, whether related to projects or not. We have our imaginary, inner world that we want to be able to realize, our inner utopia. We have been accumulating whole baggage of ideas. 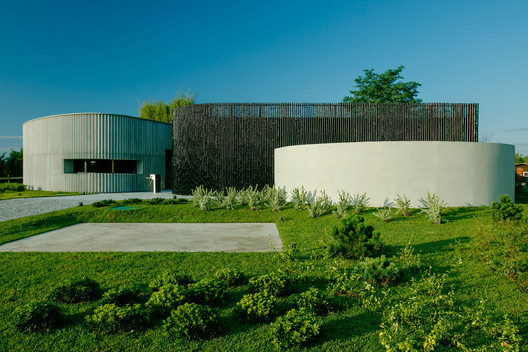