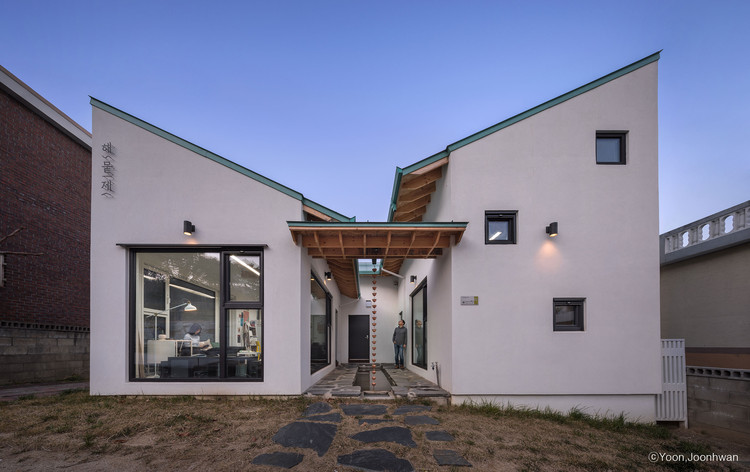 Wolhwa Street and Hae-mut-je - Walking along Wolhwa Street to the southern trail of Namdaecheon Stream and crossing Wolhwajeong Site, one could see an only vacant site where no house was built, amongst the houses built around 40 years ago by filling up the fields lower than the existing railroad. This project location next to the railroad was not a good condition to enable any new construction of buildings due to the severe noise and the narrow access. While Wolhwa Street was created along with the opening of Pyeongchang Winter Olympics 2018, the southern bank of Namdaecheon Stream witnessed a little delayed constructions, so that the works of Hae-mut-je was enabled by utilizing the existing railroad.

Huts along the Railroad - The trains going towards the Gangneung Station, the terminal of Donghae Bukbu Line, should pass through the downtown area, so that they frequently pass around the southern trail of Namdaecheon Stream. Before Wolhwa Street was made up, the neighborhood was full of huts along the railroad. However, now citizens utilize the Street as a walking trail to tour the Central Market located at the old town of Gangneung, and every weekend the walking tourists invigorate the neighborhood which used to be quiet on weekdays. It is good to see the change of this neighborhood where only the old lived in the past but which is now recovering its own vitality just like small veins becoming alive thanks to a walking trail replacing the previous railroad that separated the east and the west.

A Guesthouse and the Culturally Regenerated Urban Space - Hae-mut-je (which means a small house on a seaside land) began with the intention of making a catalyst of cultural urban regeneration in the backward village which is seeking for its vitality. The first purpose of building this guesthouse was to provide accommodation for the interns who visit my office from overseas to experience the architecture and culture of Korea, because the first intern from Paris was using a guesthouse in downtown and spending more than half of her salary on the lodging expense. So I decided to provide opportunities for the visiting staff and interns to stay with affordable cost. Another reason was to create a base for cultural activists leading the programs that can invigorate the backward village. Fortunately, a cultural activist decided to use a part of this new building as the activist office and made a catalytic momentum of brightening the surrounding atmosphere.

On Layout and Space - Hae-mut-je is divided into two parts: the guest spaces for men and women, and the office for cultural activists. The guest spaces include double-deck beds designed like the "house within a house," the loft space for rest and sleep, the kitchen system enabling long-term residence, and toilet spaces. The office is located at the corner of the road, thus creating a bright atmosphere with the transparent space on the narrow alley. With the central rainwater pool, we made a courtyard that at once connects and separates the two guest spaces and the office, so that one could see the ripples on the pool on a rainy day and hear the sound of raindrops instead of the noise of trains. 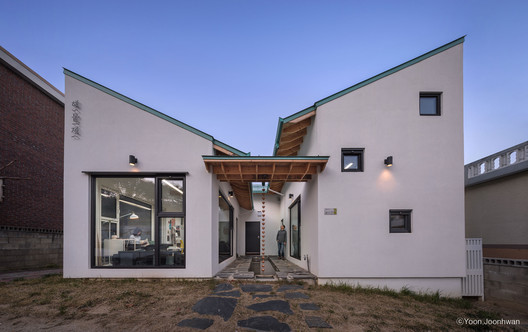