Save
A House in Sardinia / Stera Architectures 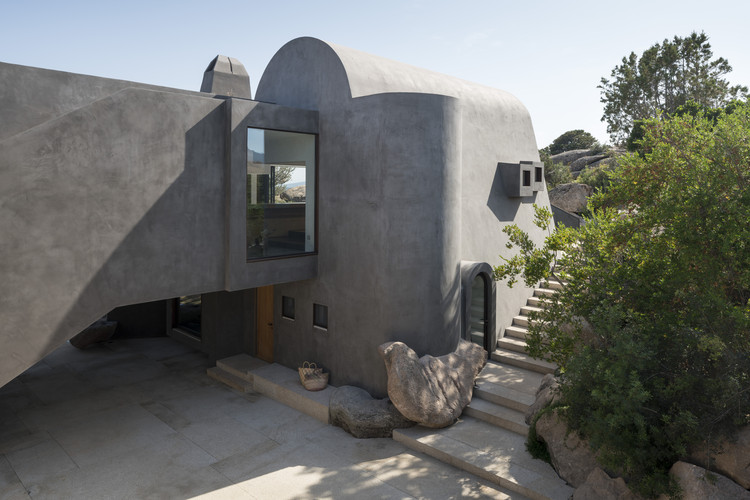 Text description provided by the architects. It is in the most characteristic elements of the Sardinian landscape that the site reveals its finest qualities, which are so many challenges to be overcome: the rugged terrain, the countless rocks, the wild inlet...This testing potential was not fully exploited by the old house that stood on the site. It had only one orientation, to the south, failing to take advantage of the light and coolness of the wooded vegetation along the road to the north, on the upper part of the site. It also failed to reveal any of the beauties of the sea below, or the poetry of the rocks with their amazing shapes. Despite the length of the plot overlooking the coast, access to the sea was not made the most of by the site and it was only revealed from the sea.

A grassy area dipped obliquely towards the sea. Because of the slope, this part of the garden was rather featureless and not at all welcoming. Based on these observations, the architect Stefania Stera set her goal as the creation of a house whose volumes would not alter the site but would serve to magnify it, in the finest tradition of Porto Cervo.

The operation is in line with the initial project of Porto Cervo, begun in the sixties by the Aga Khan with the Costa Smeralda consortium. To design and build this house, the architect wanted it to be embedded in the site, exploiting all its features. The house is designed to inscribe itself in its whole setting, with a heart that can be inhabited in any season. The whole constitutes an architectural promenade in harmony and continuity with nature, where different worlds meet and cross, one complementing the other.

So the site and the habitat nurture each other. Materials and craft skills come together and endow the whole with a dimension of durability and humanity. The founding gesture of the project, the one that determines its location, is the plotting of two axes: one projected towards the sea, the other soaring towards the rocky cliffs. Their crossing allows for the articulation of different places important in the site and the layout on two levels, both seen as the ground floor.

The ground-floor level was hollowed out of the site. It creates a closer relationship with the sea and better use of the garden. A green terrace, “the flying carpet”, will overlook the sea. A ledge path running along the sea reveals and enhances the waterfront of the site. This ledge path serves many places on the site, true singular events with multiple functions.

The layout of the house is not conventional. The real entrance is the courtyard while, for instance, the hall itself is small and forms a transitional space, widening gradually until it reaches the next room and enriches it. The rooms are laid out around the main courtyard. The latter, surrounded by various volumes articulated on the site and the spaces of the house, is bathed in the late afternoon by the setting sun. The light is reflected on the façades that surround it and creates a bright core in the midst of the whole.

From a functional point of view, three accesses have been inserted from the street: the main entrance, serving the courtyard, parking space for cars devised as a “boulevard” where vehicles can park freely, avoiding the regimented effect. For this purpose, a sliding wall is set on the street. Access to the caretaker’s house by a courtyard that can double as a garage. Access to the basement level is provided from three different points: the courtyard, the space devoted to services, and a smaller courtyard located to the east, near the main parking garage. The main access to the house is in the courtyard. A door leading to a rather discreet hall serves two rooms on the ground floor and, upstairs, the living room, dining room, office, and master suite.

The master suite, which occupies the rest of the floor, is a spacious set of enclosed and open spaces in a rich sequence of events and atmospheres framing views of the natural setting: small courtyards, patios, terraces, bedrooms, dressing rooms, and bathrooms. In particular, it has a U-shaped lounge open wide towards the sea and the small courtyard in the heart of the site. The living room develops in length, parallel to the sea. The dining room is oriented to the west

A large patio located on the north side of the courtyard forms a porch with access from the street. A staircase gives access to the roof, part of which is laid out as a terrace, the rest being covered with greenery, like the relationship between the very mineral house and its site. The small courtyard gives access to the “canyon”, seen as the backbone serving fascinating different nooks and corners of the site. A slope runs down from the living room to the east connects it with the lower level, completing a loop through an architectural promenade on the site. 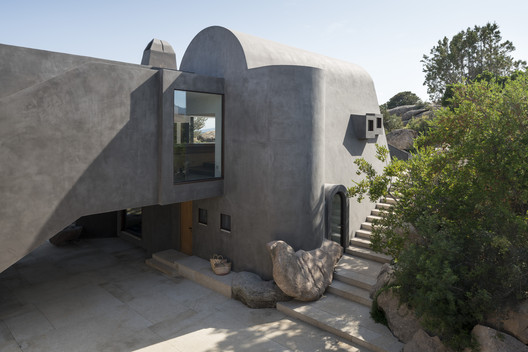