Save
History of Architecture: Megaliths, Mesopotamia, and Ancient Egypt
Share
Or
Copy

During the upcoming months, we will be publishing short articles on the history of architecture and how it evolved to set the fundamentals of architecture we know today. This week, we are going back to some of the earliest civilizations known to mankind: Megaliths, Mesopotamia, and Ancient Egypt.

In ancient Western European civilizations (around 4200 BCE), megaliths were considered significant architectural, astronomical, and communal innovations. Megaliths, whose name translates to “great stone”, were used as tombs, celestial observatories, shelter, and territorial landmarks. Many megalithic remains can still be found across Ireland, Scotland, and England, but perhaps the most distinguished structure is Salisbury’s Stonehenge.

Between the Tigris and Euphrates rivers (found in modern-day Iraq and Iran) sits a fertile land called Mesopotamia. Sumerians, said to have been the first recorded civilization on Earth (around 4000 BCE), lived on this land and exploited its rivers. In the heart of their “cities”, Sumerians built grand temples of sun-baked brick, such as Uruk’s White Temple. During the Neo-Sumerian period (around 2150-2000 BCE), temple forms were further developed and elevated on a tiered hill, known as the Ziggurat, in the aim of being “closer to God”. As for the ordinary population, they lived in small houses surrounding courtyards in densely-packed neighborhoods. A couple of decades later (around 1800 BCE), Babylonians took over Mesopotamia and introduced orthogonal geometric plans and courtyards. In 539 BCE, the Persian empire took over and combined the architectural and decorative elements of all nations they have conquered into one architecture style, later known as Persian architecture.

Ancient Egyptians used pyramids as a symbol of connection and proximity between the sun god and ruler, and since these rulers were of great significance, it was crucial to preserve their dead bodies and spirits in enduring tombs. The Mastaba was the earliest form of tombs built by ancient Egyptians. The flat-roofed block-like structure sits above the ground with a shaft that connects to a burial chamber beneath it. It was then enlarged and developed to give more importance to the pharaoh being buried inside it, producing the pyramid we know today. Egypt’s first monumental stone structure was the Saqqara funerary complex, just outside Memphis, whose pyramid had reference to the stepped-form of Ziggurat structures. The most known burial temple is the one found in Giza, which holds the three pyramids or Khufu, Khafre, and Menkaure, and the Sphinx.

The middle kingdom (around 2040-1640 BCE) produced a combined axial temples and tomb chambers with hypostyle halls. As for the New Kingdom, hierarchy was still very much prominent through elevated staircases, elaborate terraces, and colonnades, as seen in the Mortuary Temple of Queen Hatshepsut in Deir-el-Bahari, Egypt. 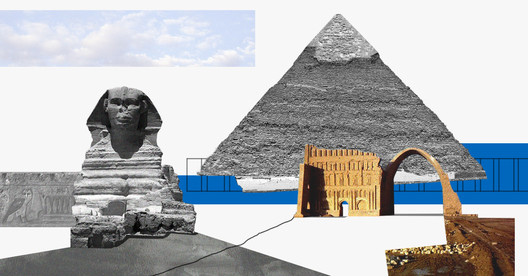