As The Cultural Landscape Foundation explains, SOM also oversaw the creation of a publicly accessible plaza that functioned as the site’s centerpiece. To enliven the plaza, National Geographic sought to commission a substantial work of sculpture. Zimmerman was awarded the commission, and the result was the large-scale stone sculpture entitled MARABAR, completed in 1984. The focal point of the work is a rectangular reflecting pool set amid five granite boulders, with these stones deliberately shaped as they were sheared along natural cleft lines. MARABAR was Zimmerman’s first large-scale project.

In July 2019, National Geographic and the firm Hickok Cole Architects filed plans for approval by the District of Columbia’s Historic Preservation Review Board (HPRB) seeking to “unify the existing national geographic campus with a new pavilion, plaza, renovated ground level, and cohesive streetscape.” To provide a new main entry and events space for the National Geographic complex, the proposed redesign would destroy Zimmerman’s sculpture, along with other elements of the SOM design.

Although the plans were approved by a 7-0 vote on August 1, 2019, with the only stipulation that “the first-floor canopy projection on the 1963 building be retained,” it is as yet unclear whether the review board was made aware of the sculpture’s presence in the plaza, or of its significance. The project is currently under review by the District of Columbia’s Department of Consumer and Regulatory Affairs, whose stamp of approval is necessary to obtain building permits. TCLF is asking the HPRB to revisit the plans for the new pavilion in order to take a full account of its effect on the sculpture.

News via The Cultural Landscape Foundation 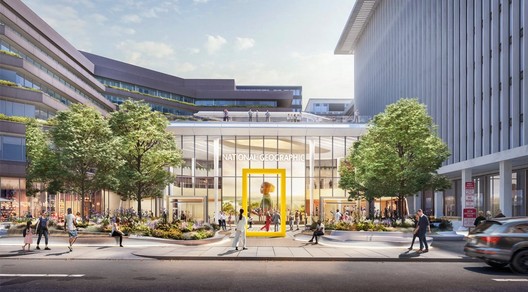