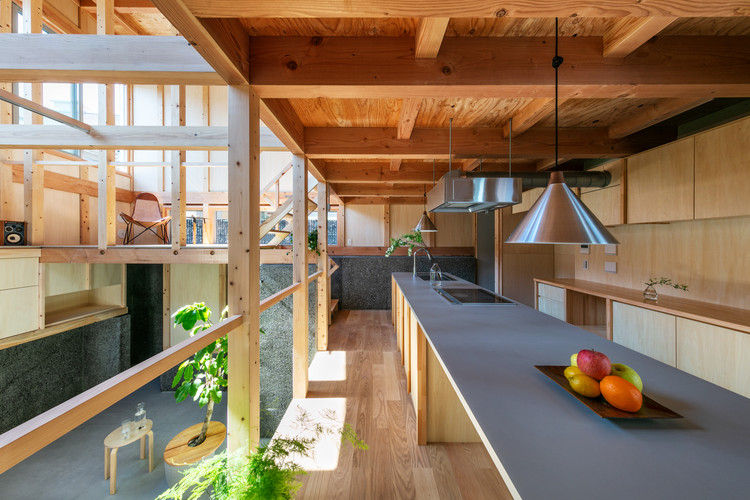 Text description provided by the architects. A new build house for a family of young couples and four children was requested at a site located in residential Setagaya Ward, Tokyo. Most of the neighboring houses were built on top of leveled land formed by enormous concrete walls to accommodate the hilly terrain. However, at this specified site, no preparation for construction had been carried out. Therefore, the earth itself with a rough slope – a height difference of 3.5m – was available. Several small areas were dug out to make the most of the terrain’s nature. Height differences in the ground level emerged by these digs, and various retaining walls to suit each level were designed. Then, “five small retaining walls” that merge nature and artefact appeared on site.

The shape of each retaining wall differs, however, all follow flat structure reinforced by L or T shaped ribs and support the earth load with its thickness, which is set as thin as possible. The thinness of the wall was an attempt to acknowledge the retaining wall - construction material – as an essential part of human living space, and implement this wall in the interior of the house even with its geothermal feature. As a vestige of the earth and architecture’s struggle for their coexistence, this complex border appeared between them should be able to offer vibrant moments in life at this living space.

The architecture is stacked on top of this structure, tracing the earth shape by the foundation and retaining walls, and constructed with two layers, which are RC and timber. A space produced by the lower RC structure is basically the underfloor space but turned into an interior. By also using them as living area, together with the space of the timber structure, the building offers one large atrium that accommodates various skip floors with different environments.

The retaining walls bring stable geothermal heat to the interior, considering the soil behind them as a continuous layer of its own, however, purposefully, the depth of each retaining wall was varied (buried, half-way under the ground, etc.) to make the environment uneven. The timber structure provides an open frame that exposes the beams in the atrium, offering an option to increase the floor space in the future. The diverse environment and structure from each floor level are blended into one living area. Residents would first feel the differences in each space, and then they can explore their own way to manipulate and design their own life within this environment.

I want to bring back the tactile sensation of living in a “place.” It cannot be achieved by just applying soil to the floor. I believe that this sensation can be accomplished only when we, as human beings, are supported and enveloped by the structure of the earth, emerged from the contrast between nature and artefact. For this house, I aimed for an architecture that is filled with the life force rooting the earth itself.   Kiyoaki Takeda