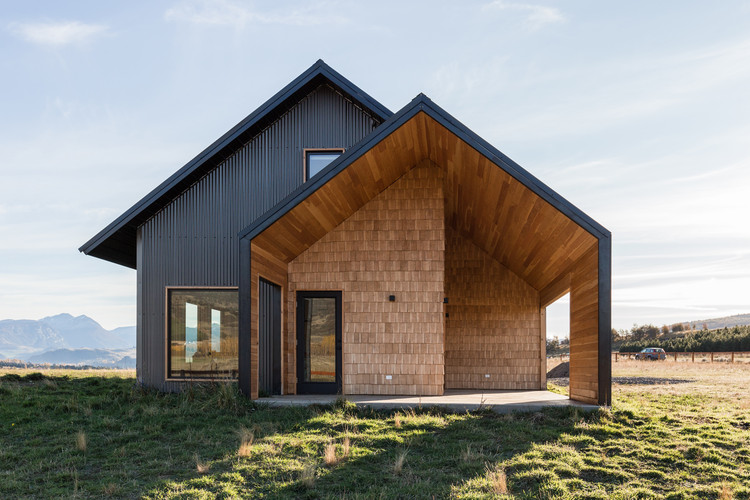 Text description provided by the architects. The task was to design a home for a young family, where they could entertain and spend time enjoying each other’s company, with space for both kids and grown-ups. A simple, low-maintenance house, with plenty of space and, more importantly, light. Metal cladding was used on the surfaces exposed to the climate, and the warmth of regional wood was preferred on the covered areas, such as the terrace. Inside, the kitchen and the family room are the main spaces, and it was imperative they had lots of light and a nice flow to the rest of the house.

The main challenge was the solar orientation. The site has superb south views, so sunlight and landscape do not go hand in hand. That is how we came up with the idea to open the house with big south-facing picture windows, to frame the views, and to receive sunlight from the north, through a zenithal solution. Thus, it was decided to introduce light from the family room, which, being on an open second level, allows light to reach the more public spaces downstairs, such as the living and dining room. We also took advantage of the sloping roof’s geometry and structure to open up the kitchen’s ceiling, generating a visual continuity between the traditional and ceiling windows. This feature gave an unexpected spaciousness to the kitchen, which was a good surprise.

The highest quality products were used to ensure the integrity of the thermal enclosure. Projected cellulose on walls and roofs, with an 8” minimum thickness, combined with doors and windows with minimal thermal transmittance values guarantee the building’s thermal insulation and correct ventilation, which are fundamental in extreme regions such as Aysén. It is remarkable how a south-facing house can achieve such high thermal and light gains, without sacrificing the views, while completely answering the task’s premises.