Text description provided by the architects. Waterkloof is a highly sought-after suburb of the city of Pretoria in South Africa, located on a hilltop to the east of the city centre. It is named after the original farm that stood there when Pretoria was founded in the 19th Century. Most streets are named after British royalty and like many areas of the city are lined with large jacaranda trees. This home is located on one of the highest points of the ridge along the extension of Victoria street the steep and rocky natural contours of the property drop dramatically towards the North and open up views over the city and the Magaliesberg mountains beyond.

The design inspiration for the project was based on creating a series of terraces or platforms, claiming back the land which is otherwise falling away and preventing effective use. Each terrace contains selected functions and connects directly to the landscape and the natural level surrounding it. The various existing large indigenous trees guided and shaped the courtyard and open spaces between the main volumes. Breaking up the rather large accommodation requirements of the project into smaller, and separated, elements allow natural and North facing sunlight to pierce into all spaces. The history of architecture is the history of the struggle for light,  Le Corbusier. Essentially the structure is defined with the street level floor structure or element extended out over the property, eventually forming the bedrooms on the upper level deeper into the stand and allowing a commanding view over the city.

The spaces created or unlocked below are viewed as open living areas, enclosed only with glass these ‘voids’ are functional spaces but also extensions of the terrace levels and landscape. Strong and simple shapes that inter connect over the various levels very few elements that achieve a lot. It’s opener, out there, in the wide, open air, Dr. Seuss. Other accommodation, service areas and retaining structure on the lower level are grouped and detailed as a single unfinished concrete element this modular block, made up of 900mm wide form-work panels, fit underneath the upper level and ‘slides’ along the main passage all the way to the basement below street level like a drawer that can be pulled out or pushed in.

Door and window openings have deep setbacks based on equinox solar sun angles and are detailed as openings carved out of a solid mass. The garden is planned as an extension of the same terraced platform idea, separated but connected, which allow for the fire pit, open lawn and kids playground. The lasting impression of the home and the spaces created is the comfortable extension of space and the direct connection to the landscape. Architecture is not based on concrete and steel, and the elements of the soil. It's based on wonder, Daniel Libeskind. 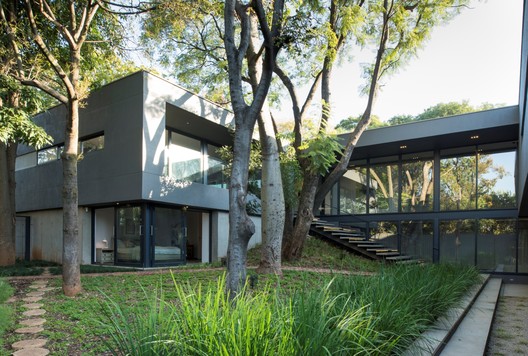