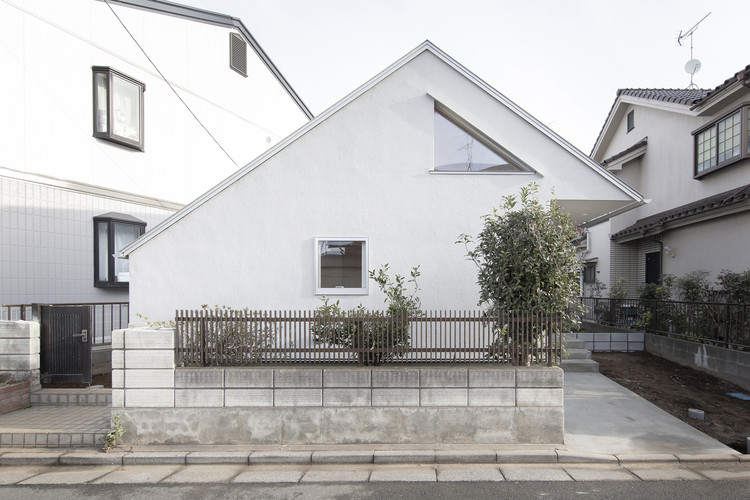 Text description provided by the architects. This is a small one-storied house standing on the residential area in Saitama prefecture that is located to north of Tokyo. In this house, some people of one family live together according to the change lifestyle in the circumstance and it also will be supposed to be the last house of the parents. The following is the demand given to this house: It should have very good exposure to sunlight in only first story, and three bedrooms in a limited surface. And one of these rooms should be closed completely. Therefore the house is composed one space as possible and dividable.

The original form of the house is composed two house-shapes which have 5.5m x 5.0m square and 35 degree pitched roof. These two house-shapes are joined each other at 25 degree angle. Each two house-shapes have one pillar which is put on the center and have one bedroom that be able to divide by partition. The wall facing south moves inside in order to make eaves for approach and bicycle parking lot. On the other hand, a part of wall facing west extends outside in order to make store room. In interior, it has different spaces, one is narrow and sunny niche that has similar figure with the house-shape, and the other are some closed box; bedroom, Tatami room and toilet.

The two house-shapes are joined at an angle corresponding to the trapezoid site. The trapezoid site itself means that the site exists in between two different environments. In other words, one of the two house-shapes is confronted by the front environment, and the other is confronted by the back environment. The house has the form given by these insignificant things which exist ordinarily anywhere in the world. As a result, sometime things integrate vaguely each other, and sometime things have gap each other. It is hoping that a tie of meaning between each things and environments weaken and the things itself emerge as strange objects in front of people`s minds.