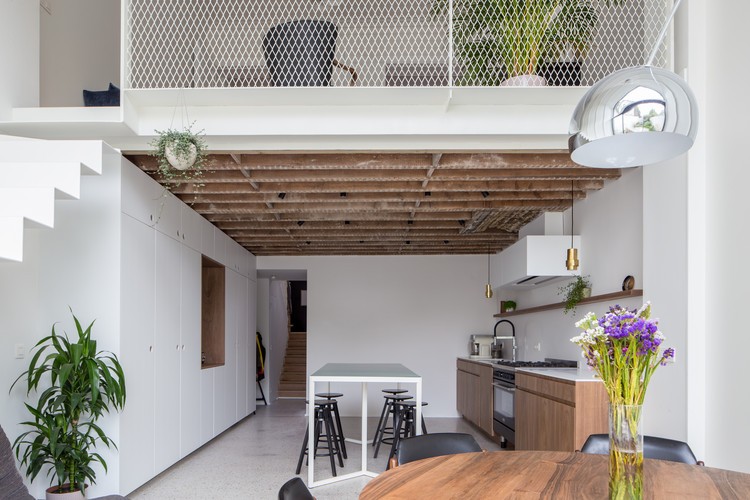 Text description provided by the architects. The project transforms and enlarges a small house located in the center of Brussels. The architectural intervention is limited to the addition of an extension at the rear facade that connects the living spaces to the existing small garden. The added volume is carved near the adjoining terraces for respect of the direct neighborhood and to limit the densification of the island interior.

The small width of façade (less than 5 meters), the formal complexity of the volumetry developed, the limited timing of construction and the difficulties of access have oriented the architectural design towards the prefabrication of a steel shell.

The ancestral methods of boilermaking, and modern welds, together with a thorough reflection of the structural capabilities of steel sheets have reduced to a strict minimum the amount of material required for the realization of the module.

The new shell consists of a single sheet of steel 5mm thick. It is stiffened by a set of 5 stiffening gantries of 20mm thick for 100mm deep. This simple structure makes it possible to optimize the space generated by the intervention. The new envelope regulates all interior finishing details generated by the complex formal volumetry generated by the project. This allowed to integrate the staircase to the envelope to minimize the cost of implementation.

With a simple painting, the steel becomes the visual signature and the inner skin of the project. Finally, the physical characteristics of steel allow it to serve as a natural vapor barrier vis-à-vis the outer insulation that surrounds it completely. The principle of prefabrication allowed a significant saving of time for the implementation of the project: 3 weeks of manufacture in workshop, 1 week of painting, and only 3 hours for installation by mobile crane.

Steel also has the advantage of being 100% recyclable, suggesting that within a few decades, the module can be extracted from the project and recycled in its entirety.

This project is a prototype meeting the many constraints related to the act of transforming and expanding into a city. Our workshop wishes to be able to decline this way of conceiving on future projects.