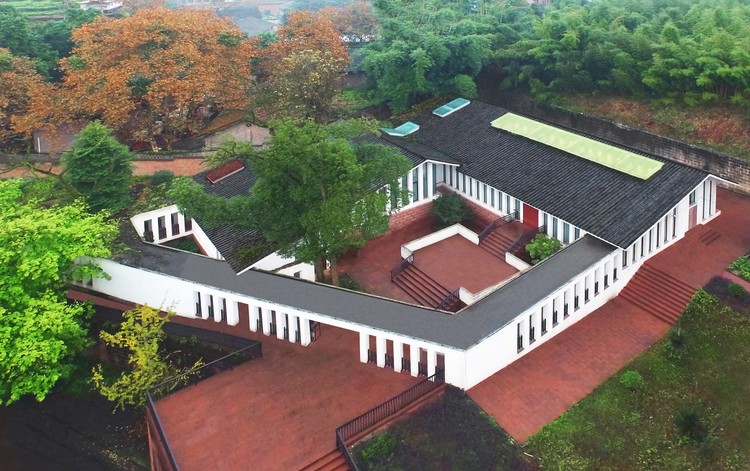 Text description provided by the architects. The Memorial Hall is dedicated to the deeds of the martyrs who rest in the adjacent cemetery in the city of Chishui, in Guizhou province. The cemetery complex is organized around a main west-east axis; the oblique cut in the southern part of the new building and its main entrance staircase’s orientation highlight this axis, paying respect to the old cemetery complex. Added in 2012, the Memorial Hall is located on the northern side of the main cemetery axis, on a Danxia stone hillside with an elevation difference of about 10 meters. Danxia is the local red stone, typical of the Chishui area, whose color is given by an accumulation of reddish sandstone.

Architects took inspiration from traditional Chishui dwellings, strongly characterized by a typical multi-patio layout, which increases natural light and ventilation, and roofs covered in blue-grey tiles. The multi-patio system has been implemented by recreating a specific atmosphere for each patio, while the double-slope roof, still covered in characteristic blue-grey tiles, has evolved into a continuous undulating overall roof, which emphasizes the different areas and the terrain movement.

The Memorial Hall showcases the deeds of the martyrs through pictures, objects and various artefacts. The space is designed to give extreme flexibility to the exhibition areas, which are regularly updated according to different themes.

The building is characterized by a porous layout, where three courtyards progressively follow the movement of the terrain, preserving the existing trees. Two 50-years-old camphor trees, 30 meters tall, highlight the courtyard at the main entrance, while the fragrance of the osmanthus tree characterizes the triangular courtyard on the north-west. The bamboo forest, located on the east side of the plot, has also been preserved; the building is integrated into the surroundings, keeping the original vegetation and camouflaging through the typical blue-grey roof tiles.

Each architectural element is strongly marked by the use of one specific color; the blue-grey roofline is suspended over a pure white body, anchored to a bold red layered base, made of local Danxia stone, the same material as the surrounding terrain. The only other colors are brought to the space by colorful skylights. In front of the entrance is an atrium characterized by a diffuse yellow light, which creates a solemn and lively commemorative atmosphere. In the northern area two more groups of skylights illuminate a long narrow courtyard, where white light and columns recreate a pure atmosphere. A ramp corridor connects the different areas, highlighted in the northern part with red shades.

With its porous layout, colorful highlights and limited material selection, the Memorial Hall aims to recreate an introspective atmosphere through the development and regeneration of traditional dwellings. The building fits into the cemetery context and into the neighborhood, keeping construction costs low and indicating an evolution path for local architecture. 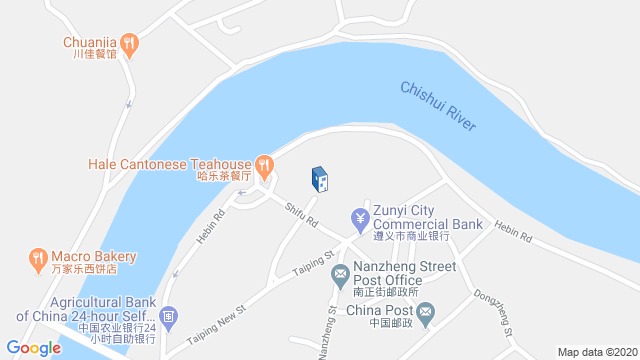 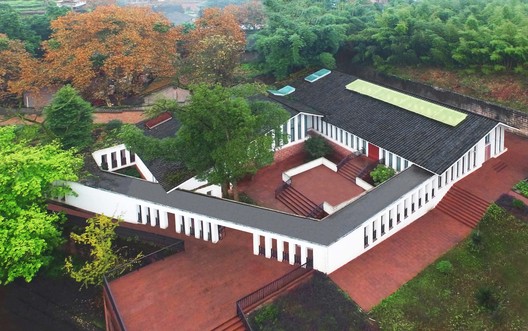