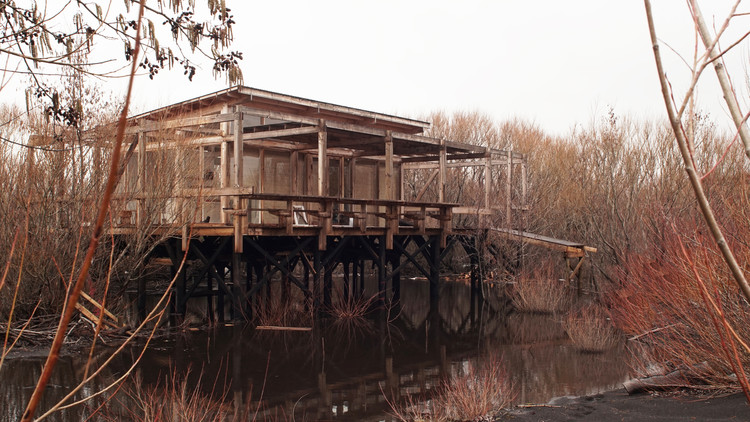 Text description provided by the architects. In the present times of the city where the comfort seems to isolate nature and their own manifestation, there are exceptions that seeking to turn back to the beginnings, where the fragility of survival it moves slightly of that comfort zone.

Raising two meters height in the middle of willow forest, in the beginning, were build two large wooden platforms of 150m2. Two families used to camping during the summer and settled randomly over the outskirts. Since this is a flooding area –Plata River´s Delta- where the water level changes 150cms, to get there in Autumn and Winter got difficult but not impossible. Over the years they wanted to travel often and have more comfort, so they thought to build over the outskirts something slightly greater than a tent, a space that houses the basics. Extended over the platforms a grid of pillars that continues from the base and organized the total surface. Only a third was roofed and the rest stayed as an open –rainy- terrace, a space in between of multiple uses which allow willows to enter slightly. At the center was the closed space wish was considered as a large common space. Around it, the bedroom, bathroom, and bunk beds. Most of the perimeter is glass windows and thanks to the heights, the willows show thin branches that let a glimpse of the skies.

Since the site can only be reached through the river, all materials had to be crossed on a rowboat. This was one of the reasons why it was thought to be made of wood, a low-cost material that allowed with small elements to build the total. Therefore, with the utilization of minimum resources, materials of common dimensions, and local carpentry labor, it created a basic constructive system that let it assemble easily the whole structure. The project, understandable as a Refuge -of very low budget- and the objectives to have a minimum impact over the territory, is literally a “Tent Over Pillars”. 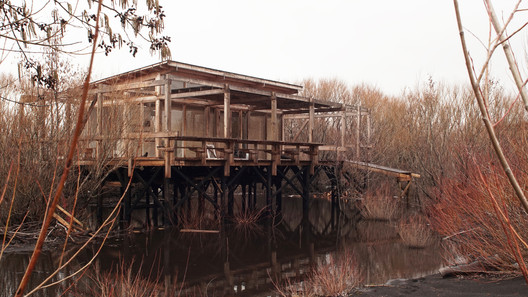