Save
E Pluribus Unum, The Chapel of Many / Sebastian Hicks 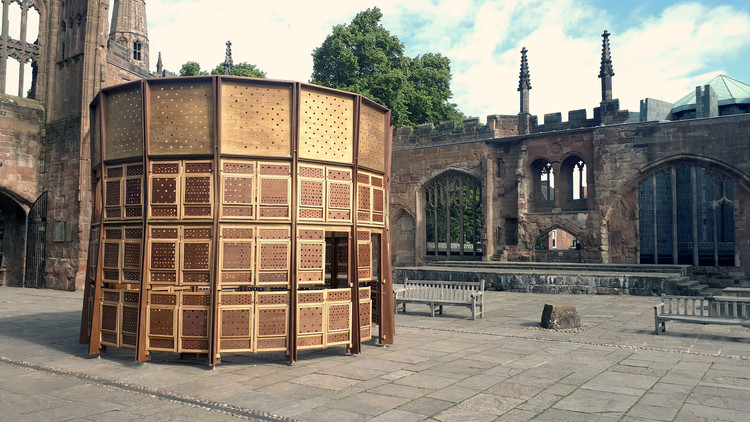 Tools of Reconciliation/ Structures of Negotiation. A space of non-denominative gathering, the chapel is conceived as a space of reconciliation. The walls of the Chapel are created of bespoke folding chairs. In its complete form, space is a monolith, without entry or exit. An individual wishing to enter the space will have to remove a chair. As they do so, so a window is formed, a view is framed. In this closed-form, space is one of contemplation and protection. Take a chair and a window is formed, two chairs form a door. As more people arrive to occupy the space, so the walls come down. The gathering of people brings light and transparency. In this form, space is one of exchange.

The transformative power of physical gathering leads to openness and transparency; the basis of a simple concept, borne of a secular, humanist core. As more chairs are removed, so space dissolves vertically and becomes a surface organized by the dynamics of the group or groups. As a symbolic, interactive object of reconciliation, the pavilion is a research tool but is also the platform for collaborative practices, community engagements, performance, and artful inquiry. Part-funded through the European Union sponsored, Migrant Friendly Cities initiative, and supported by Coventry University, the building of the structure was a collaborative process integrating students and retired experts.

The Chapel is a transversal production project, facilitating intergenerational and research-based learning, using both automated and traditional, craft-based, building. All mechanical fixings were developed and produced in conjunction with the engineering department of the university, whilst the joinery for the 90 bespoke oak and marine ply chairs, was developed with local carpenter Tony McCourt. The structure began its journey as part of National Refugee Week, in the ruins of St. Michaels Cathedral in June 2019 as part of the Coventry Welcomes festival.

The Cathedral ruins are maintained as a memory of the devastation caused by fires after incendiary were dropped on the city in 1940. Following the bombing, Provost Howard had the words ‘Father Forgive’ inscribed on the wall behind the altar of the ruined building. Ever since this act of forgiveness, the Cathedral has embarked on missions of reconciliation. The project draws on references, such as the furniture of Chandigarh, as a medium for the preservation of local design expression, and the case study of the Cave of the Patriarchs, where the chairs, screens, and carpets are tools of transformation and spatial appropriation. Sebastian Hicks is a practicing architect, Course Director for the Master of Architecture at Coventry University, and a Research Associate at the Centre for Trust, Peace, and Social Relations. 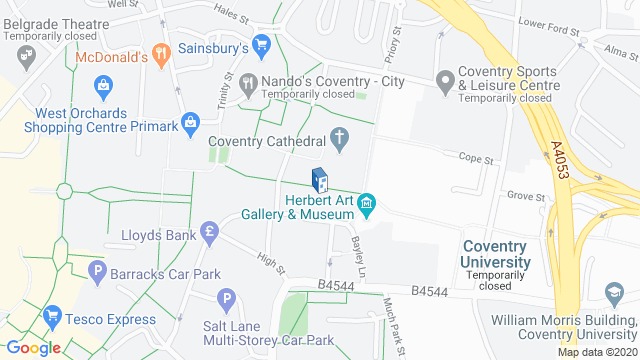 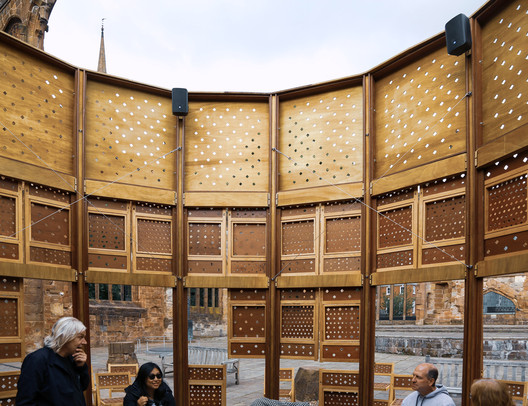 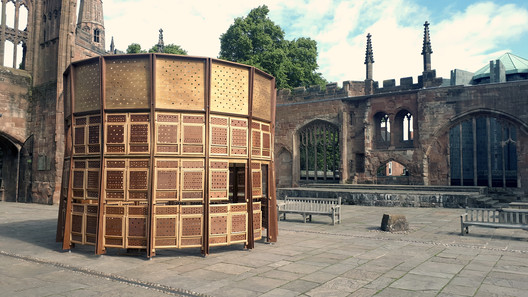