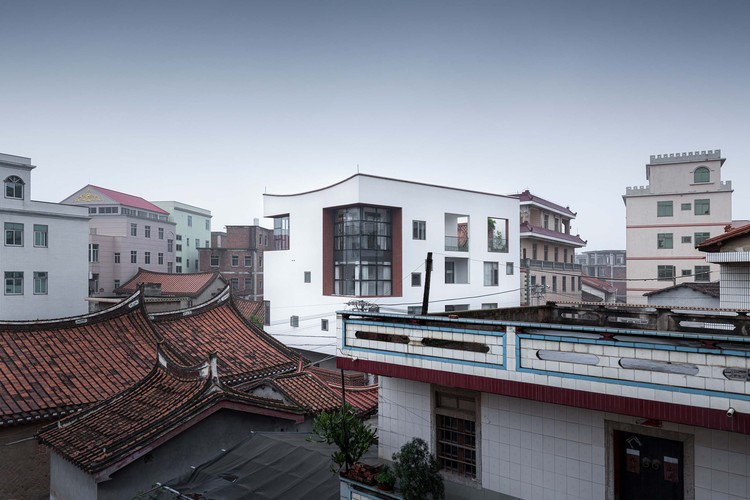 Text description provided by the architects. In Qiwu village of Putian City, there are many small high-rise buildings newly built by villagers in recent decades, in which Puqi Wu house is located. Looking from the narrow streets and alleys, the simple volume, bright colors, and rectangular windows of different sizes give it a unique image in the background of local houses. At the same time, the curvilinear red tile roof, the looming courtyard in the air, and the cordial red bricks in the streets and lanes convey the modesty and posture in the traditional environment. The whole design of the house revolves around how to interpret the dual meanings of traditional culture and modernity.

The modern starting point of the old street. Wu house is built by Wu brothers for the family. The white box in the early period of modernism has become our initial idea of the project. As a reflection on the modernity of the project, all the volume and window openings follow the formal and functional principles of modern architecture as a rational expression in the rural background. The curly roof with Puxian district's local characteristics is abstractly transformed into the high profile of modern geometry.

A study of characteristics of traditional houses in new buildings. Puxian folk house is a unique branch of Chinese traditional folk houses. The area of the former buildings has been shrinking in the horizontal direction, and on the contrary, they have been growing into buildings in a vertical way. In the past, the form of the plane layout has been recombined and folded in a new way that adapts to the contemporary urban environment and has been put into the box of modern architecture.

The design follows plan setting with clear axis symmetry and space hierarchy in Puxian traditional house. At the same time, the consideration of relative independence is added: the basic plan form is traditional three Bay, the middle open part is a public area or vertical transportation, and the family has respectively Multi-level living rooms on both sides.

The open roof courtyard is moved from a traditional building into the air. The whole roof layer is divided into two parts: the indoor water yard in the form of the patio and the open outdoor landscape. Tea rooms and other reception spaces are arranged around the water court, and the traditional eaves curve converges on the atrium. Close guests can go up with the host, drink tea, boil wine, and chat in the outdoor chairs of the roof yard.

Close dialogue with countryside places. The location of Wu House is exactly the intersection of several roads in the village. The facade of the house is simple and modest, creating a sense of rhythm by subtraction so that the inside and outside are interconnected. In fact, large and small or continuous or independent openings, in addition to corresponding to the internal functional space, adjust the indoor light, shade, and ventilation, there is another layer of logical structure, that is, dialogue with the alleys in all directions. It is not only a distant view in the walking of the village paths but when the host looks out of the window at home, the sightline can spread with the traffic network and extend infinitely.

Different from urban habits, in the countryside, the network of acquaintances is closer. On the main facade of the house, there are concave-convex entrances, balconies, and roof courtyards which are zigzag to meet the street space on the vertical section. And thus make the distance closed between the host and the acquaintances and neighbors on the outside street.

A modern combination of local materials. In order to respond to modernity, the façade is painted white. The other functional components of the building are all local traditional materials. As the local weather is wet and rainy, the bottom wall uses stone to resist the rain erosion. The bottom facade on the main side is made of light-colored stone, matching the white tone of the facade. Redbrick is one of the characteristics of Fujian folk houses, and this project echoes in numerous ways. The partially hollowed exterior wall, the concave volume edges, the red brick screen wall in the roof courtyard, and the outline of the building is also made up of red bricks.

The use of tiles in Puxian area also continues the red tiles in Southern Fujian. The sloping roof of the roof yard for rainwater drainage is finished with red tiles, which is reflected with the surrounding buildings in the birdview.

The final completion of Puqi Wu House shows the optimistic environment in which the traditional building forms and materials are used in rural construction. More and more clients, inclusive neighbors and experienced local construction masters who can accept the aesthetic design are willing to make new attempts with architects, and earnestly realize the intertextual relationship between tradition and modernity. Wu House is evidence and also reminds us of our responsibility as an architect. 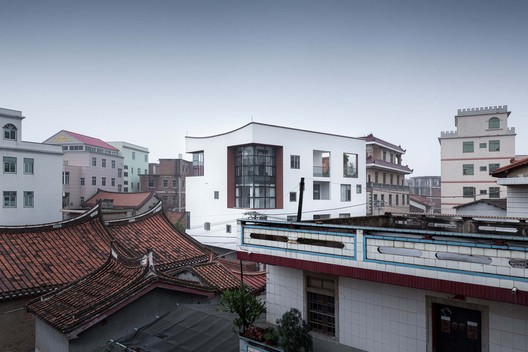