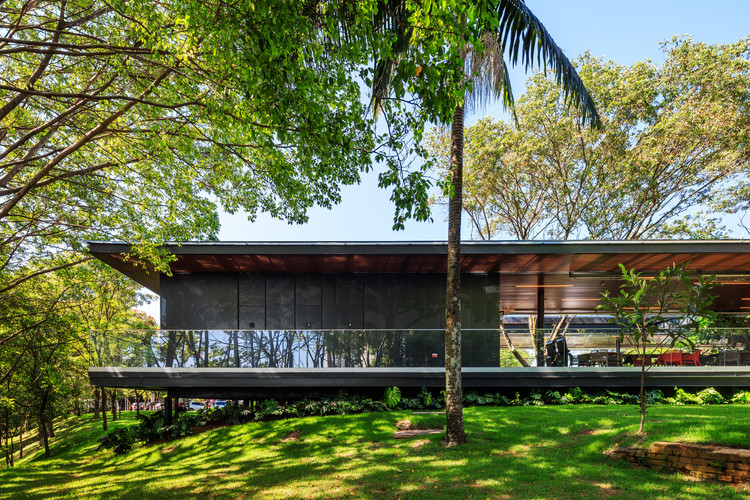 Text description provided by the architects. Located in Cidade de Deus, headquarter of Banco Bradesco in Osasco, the project aims to meet the demand for the eating and services of the area. With a population of approximately 12 thousand employees and several administrative buildings, the headquarter of the institution did not have aimed spaces for such uses.

The first analysis made sought to identify possible areas for the implementation of this project which should be modular and flexible. A point of attention set by the bank was the high demand for parking spaces. Therefore, the implementation in the remaining areas was opted in order to not reduce the number of it and in order to preserve as much as possible the existing tree extension. Another relevant premise was to implement the project according to the population density of the surrounding buildings.

The starting point of the project follows the premise of land occupation in a subtle way, taking advantage of the existing topography as well as the local vegetation. The modules are configured as huge metallic pavilions, raised from the ground, with circulation areas and patios all around its perimeter. The supporting areas such as kitchens, storage and bathrooms are opaque, closed with perforated metal plates that shape tree silhouettes, imitating the shadow of the large local vegetation. The other areas receive glass closures that open and close, visually integrating with the surrounding green areas. Its cover is composed of a vegetal layer, which is integrated even more to the location, contributing to thermal comfort and reduce problems of gutters and rainwater harvesting.

Three areas were defined for the implementation of four modules. The first area houses modules 1 and 2, which serve approximately 70% of the local population. Located in an area with irregular topography, module 1 is located on the lowest level and houses a room schedule of small services such as laundries, shoe stores, hairdressers and coffee shops. Its cover is used as a living space and a vertical circulation core connects it to the lowest level of the terrain. A pedestrian walkway connects it to module 2, as well as a large external grandstand. Module 2 contemplates areas for restaurants with patios. A large internal void integrates the building with the local vegetation.

Module 3 is implemented in the sports sector area of the institution's headquarters. Oriented to the complex’s swimming pools and courts, the building houses a diner on the ground floor and a gym with the capacity to serve 1,500 users. Its irregular trapezoidal geometry generates a cantilever that marks the entrance of the building. Metallic perforated sheet metal supports the incidence of sunlight on the West Face as well as allows the desirable view of the sports complex.

Module 4 extends over a linear ground, although with irregular topography. To guarantee the maintenance of the vegetation, several openings in the pavilion were considered in order to distribute the room schedule in the existing glades. The declivity of the ground on the edge allowed the configuration of a mid-level plateau below the rest of the building. It was decided to maintain the roof level, configuring a space with a higher ceiling height connected to the rest of the pavilion through a ramp in the middle of the vegetation. The room schedule includes restaurants, coffee shops, pharmacies, laundry, and a mini-market. 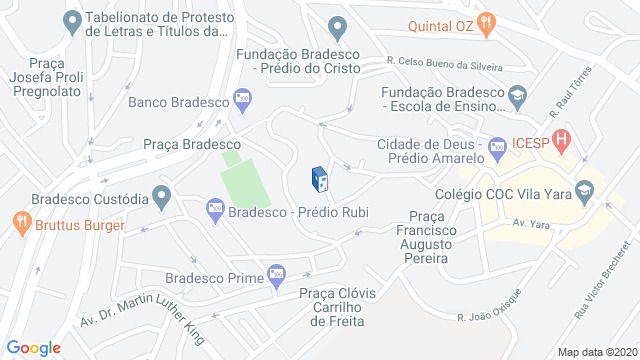