Save
The House of Greens / Intrigue Studio + Lab 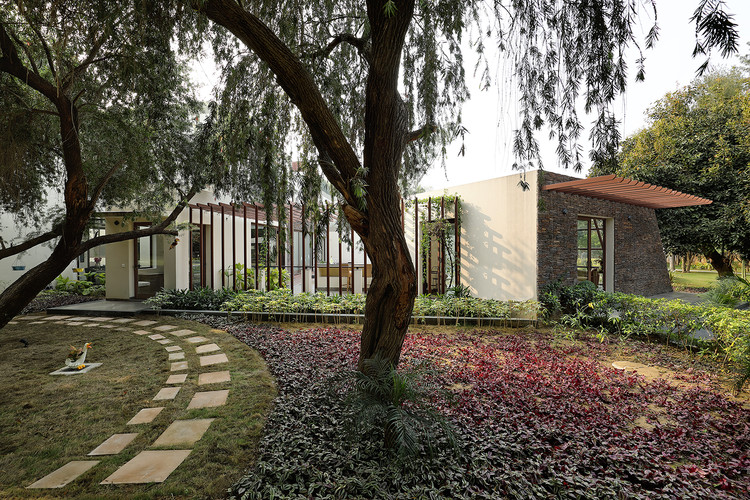 “The un-built is the true context for the built. It is only then, that one is able to create an organic, timeless spiritual space for the inhabitants.”

Located in one of the prominent areas of New Delhi, India, the project has been devised with a concentric thought of preserving the thriving tree-scape of the site. The built spaces have been carefully crafted in and around the existing tree-scape, that was desired to be maintained by the patrons of this lavish household. The architecture and interior design of this 2 acre Project, accentuate the authenticity of the site and are conceptualized in sync with the mature gardens that are punctuated by a swimming deck, stretched along the entire front length of the building.

The clients primarily envisioned a green retreat integrated with luxurious modern-day facilities. Merging the organic environment with the interior spaces, the built-form has been given a horizontal spread, meandering the composition in a lyrical flow with continuing green connections. The connecting spaces are adorned with cantilevered metal trellis, to enhance the journey between each cluster of built-form. Requisite privacy has been presented to the users, by placing the private spaces on the rear end of the site and fore fronting the design with vibrant green lawns.

Approached by a driveway, the user is greeted with a panoramic view of the green spread. Composed of indigenous slate cladding, the external façade complements the natural palette of the ambiance while possessing a bold and defined statement. Complying with Delhi’s seasonal changes, the flora sprinkled throughout the land; dons changing shadow patterns on the façade, thus imparting it with a dynamic expression. Magnanimous openings on the north and eastern side, give a glimpse of the poised interiors. The south surface has minimum openings to maintain comfortable indoor temperatures, during peak summers. Aligned on an ordinal axis, the main opening is directed towards a serene swimming deck, on the northern side.

Along with composing the entire architectural schema, the design team has also inculcated pieces of bespoke furniture. Consoles and patterned coffee tables instill the picturesque flavor into the layout along with maneuvering the activity around these pieces. A 10 feet long bar counter, suspended from the ceiling, forms a major highlight of the dining room as compared to the subtly blending bar design by the deck. Smaller aspects of elegance including the frames binding the artistic paintings have also been fashioned by the architectural team, to provide the ultimate design exclusivity. The House of Greens, thus, is an evolution of the enveloping green microcosm forming an amalgamation of timeless architecture with chic décor and interior design. 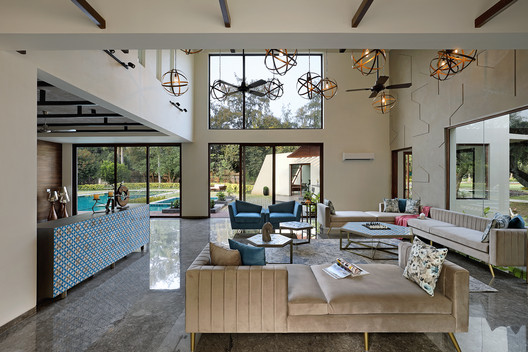