Site conditions
The case is a complex of community service centers and neighborhood businesses. The main function is divided into two parts, one part is the community service office, cultural activities and sports activities, this part is free to the community residents; The other part is the community business service facilities, including snack centers, vegetable markets, post offices, Banks, shops and other business functions. All areas of the building are open to the public for the purpose of serving the residents.

The site is a north-south narrow strip with a distance of about 320m between the north and south ends, and only 70m between east and west, which greatly limits the depth of the building. The building height is limited to 24m, the floor area ratio is 2.0, and the east and west are divided into two property rights of the land, the building can not be crossed, these conditions have formed a big limitation on the building form. The volume is divided into two rows, with a three-storey commercial building to the west, rising to five storeys to the east, business at the bottom and community at the top. There is a bridge between the two, forming a commercial street. How to transform the tedious linear space into an active and complex space with rich experience is a problem we have been facing actively from the very beginning.

"Three-dimensional city park"
With surrounding the construction of affordable living will be in full swing, in the lack of context on land, the original scenario will be erased all, instead, the new road network with flat land, forest of high-rise residential set for tens of thousands of residents to provide the starting point of a new life, different way of life and living experiences will make the place for the residents gradually lose the collective memory of the old one.

In this context, "three-dimensional city park" space theme was established, the case to try to break the shackles of conventional commercial pattern to form more openness and tolerance, for shopping for the residents, communication, roaming and movement, learning and place of a lot of experience, one can build aroused for the residents of identity and eventually create new memories in the neighborhood public space. So the neighbourhood commercial center is not only as a consumer place, is surrounded by residents of a wandering public recreational place, the more feel is rich space level, three-dimensional walking paths, the general landscape park and entertainment elements, allowing consumers to more addicted to personalized space, experience the fun of shopping, and feel the strong sense of space recognition, and a profound memory and emotional resonance.

Spatial interface
The view from the Yangtze river bridge will be the image of the project in front of the city. However, due to the site restrictions, it is inconvenient to develop in the direction of depth, so it can only occupy the long site space in a relatively cramped way. The resulting volume will be a flat strip, which is a little plain. Therefore, the design divides the elongated shape into three sections. The southern section is the stadium for sports activities, which is tall and heavy. The middle and upper part is the cultural activity area, which is made up of four flexible blocks. The northern section is the main entrance of the commercial street, with a three-story volume that emphasizes sculpture. On the west side, two large gaps appeared along the street, which became the interpenetration of the urban space into the commercial space. In this way, when viewed from the four Bridges, a strong sense of rhythm and rhythm will be generated, and the form of opening and closing also resolves the pressure of the building volume on the urban interface.

Because overall building height is homogeneous, even partial adjustment layer, interface for the overall skyline relations of the form or dwarf, is too flat, so in the design, joined a up to 39 m structure, making it too gentle the commanding heights of the skyline, has played a strong symbolic role, also further shaped building is to the rich image of city interface. Generally speaking, the intuitive impression of the architectural form on the west side is a metaphor for the giant ship of the Yangtze river, which seems to coincide with its location and surrounding environment. 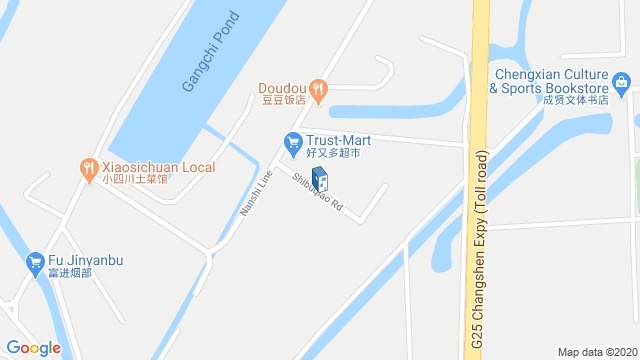 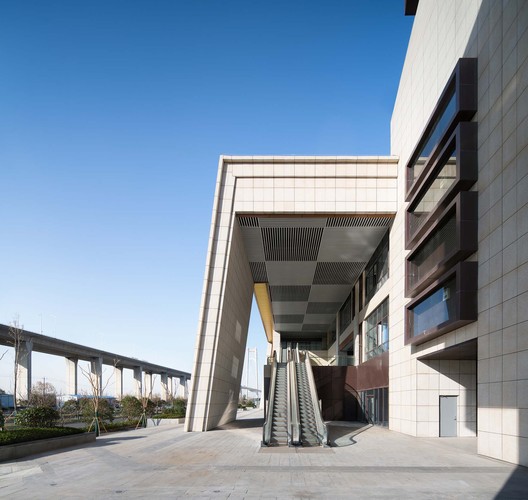