Save
Building Culture: Perkins and Will on Designing with Respect for Indigenous Traditions
Share
Or
Copy

Context defines both how we design and what we build. This holds especially true when designing contemporary architecture for Indigenous communities. For Andrew Frontini, Design Director of Perkins and Will’s Ontario practice, architecture should be driven by a strong social agenda. As the lead designer on the Seneca CITE project, Frontini and his team created contextual spaces informed by the local community and its needs. 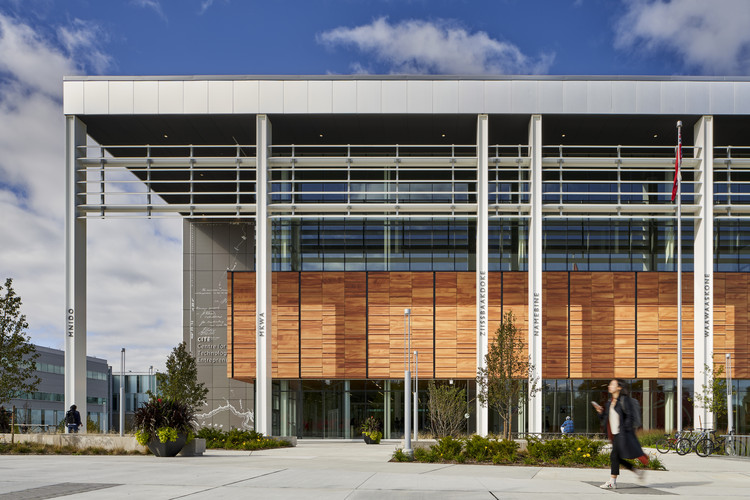 In this interview with ArchDaily, Frontini discusses his work on Seneca CITE and how the design team worked to incorporate the values and history of Canada's Indigenous communities.

Can you tell us more about Seneca College and its mission?

Seneca College of Applied Arts and Technology is a multiple-campus public college located in the Greater Toronto Area of Ontario, Canada. Seneca’s mission is to contribute to Canadian society by being a leader in career-related education and training. Students can choose from more than 260 careers and receive the academic foundation, workplace experience and practical training needed to succeed. Seneca opened in 1967 as part of a provincial initiative to establish an Ontario-wide network of colleges of applied arts and technology providing career-oriented diploma and certificate courses, as well as continuing education programs to Ontario communities. The province was responding to the increasing need for sophisticated applied learning as technology continued to change the nature of work and the provincial economy.

Seneca has four main campuses, and a total of nine campuses located throughout the Greater Toronto Area and in Peterborough, Ontario. Each campus has its own academic specialties. The Newnham Campus where the Seneca CITE building is located, is one of the largest college campuses in Canada. It is home to more than 11,000 full-time students in business, engineering, aviation, early childhood education, fashion, information and communications technology and liberal arts.

How did the new campus building come about?

The CITE building was conceived by Seneca’s president David Agnew in response to a pressing need for dedicated space to educate students in the fields of digital fabrication and design. Seneca was not only looking to train students but help them develop the skills to imagine their own futures – become entrepreneurs in using state-of-the-art technology with manifold applications. The project program and brief were developed as part of a successful application for a Canadian federal infrastructure grant (SIF – Strategic Infrastructure Fund).

This funding was developed with a mind to achieve multiple objectives; stimulating high tech innovation, entrepreneurship, sustainability and the recognition of Canada’s Indigenous peoples. Seneca’s application was strategic, citing the need to elevate the level of digital literacy on campus, provide students in the skilled trades with an entrepreneurial background and to give a voice to the hundreds of Indigenous students, staff, faculty and alumni at Seneca. At a campus planning level, the new facility was conceived as a dynamic new face for the campus. The site allowed a forward-facing architecture that engages with the busy thoroughfare of Finch Avenue in Toronto, to create a presence to a campus that had historically featured a utilitarian and inward facing architecture.

How is messaging about Indigenous teachings and history integrated into the building?

The design evolved through extensive consultation with Seneca’s executive, academics, and The Indigenous Education Council (IEC). A universal container of modular spaces for teaching and making are connected by a linear atrium — the Innovation Gallery. Seneca desired to showcase innovation and Seneca’s Indigenous community simultaneously. The IEC became an active participant in the design, identifying a series of architectural elements that could tell Indigenous stories within a contemporary architectural framework; 13 columns reflect the Anishinaabe lunar cycle, three program containers evoke birchbark “memory chests” and a series of integrated artworks feature the living culture of Seneca’s Indigenous community.

For the design, what are some ways that you’ve combined Indigenous traditions with technology?

A series of large-scale graphics were deployed as storytelling and way finding elements within the space. We worked with Seneca’s Indigenous Education Council and Bruce Mau Design to develop a “Manifesto for Making” which challenges the building’s users to combine the spirit innovation with an Indigenous world and a vision of a sustainable future. Graphics that depict technological themes like connectivity in the digital age, genome sequencing and particle physics were paired with messages reflecting an Indigenous world view such the wampum belt treaty “one dish with two spoons,” the lunar calendar and the cyclical nature or traditional hoop dancing. Indigenous artifacts and members of Seneca’s Indigenous community were documented in large-scale photography to make the message immediate and specific to Seneca.

What are some design challenges that are unique to creating a building that respects Indigenous knowledge?

I was surprised and impressed by the level of engagement and the diversity of voices that came forward in the sessions with Seneca’s Indigenous College Council. We had a very open dialogue with varied perspectives from elders to first-year students. What was very interesting was their perspective regarding design. What ‘it’ looked like was secondary to what message the design communicated and how it supported use and community. Indigenous people were talking to non-Indigenous designers and teaching us how to tell their story with our skill set. At first, we were concerned about this – that we couldn’t occupy this space in an authentic way. But our client, Mark Solomon, the Dean of Students and Indigenous Education, himself being a member of the Indigenous community, encouraged us to do what we do best – listen, create, communicate and listen again until we got it right.

As you look to the future, are there any topics you think should be front and center in the minds of architects and designers who create similar buildings?

Its important to realize that “Indigenous” is an incredibly broad term. As designers, we need to be informed as to who we are meeting culturally, demographically, politically. There is an enormous diversity of people that fit under the umbrella of Indigenous. Meaningful consultation doesn’t happen using generic terms. It’s important to get specific, both in understanding who you are speaking to and ascertaining what you want from them and the process. I would like to outline a few of the key lessons that our team came away from the process with; 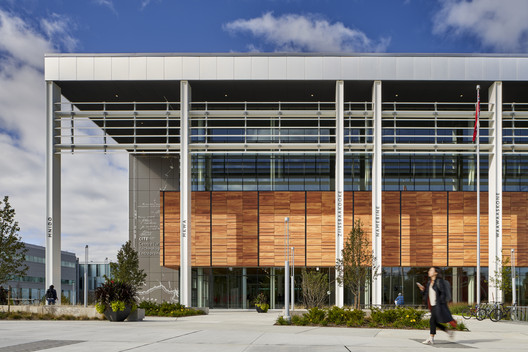