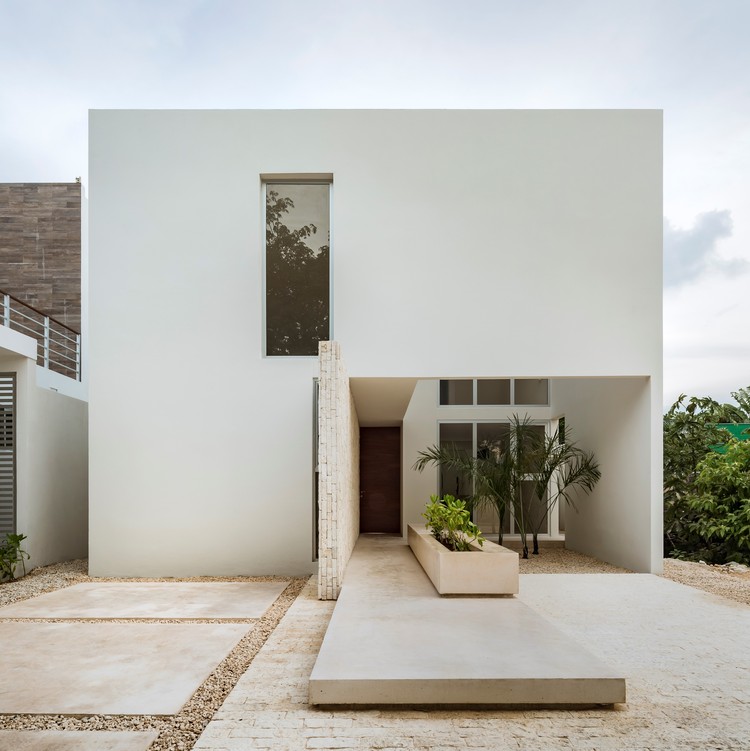 Text description provided by the architects. What does a house want to be? - Louis Khan For a while now, Cancun has begun to distinguish itself as a kind of architecture that has fought to identify itself with local aesthetics that complements the neighboring city, Mérida. Basic, simple defined land, orthogonal and of basic dimensions- primarily from 180-350 meters squared- permitting that couples or families primarily enjoy the life on a peninsula through the architecture and design. The kind of architecture that has established its format into the local community, making it coherent, beautiful and original in the locations in which the architecture projects are placed.

This is the manner, we’ve arrived to Monteblanco 26, a home of 300 meters squared in a rectangular provision that creates a space that creates a sensation of awe, an awe that is expressed in the walls and openings, in the cream and white toned facades, through the purity of nothingness that adorns it. Using an impeccable utility of local materials, such as the wood, the ‘sas-cab” or white stone found in the region, the Mayan concrete, apart from the stucco, gravel, pastes and of course, the Chuk-um, a Mayan resin that functions as a concrete supplement. All of this joined together to form a polished execution that has a small reference to the Mediterranean or Portuguese architecture by architects such as Fran Silvestre, Aires Mateus, and even Campos Baeza. The house is a singular block horizontally and vertically perforated various times to convey an appearance of the primary element that it constitutes, the leitmotif of the architecture’s composition: (the void, the aperture, the gap, the space, the slit, the perforation, the break) in the walls and roof, that is to say, the windows. The experience inside the house then becomes a game of frames- I see you, you see me, I peek into, you peek out-, where the distinct elements, similarly in the interior as well as the exterior, portray and obscure: a ceiba in the exterior garden, the pool presuming a pond, the patio and garden’s house accessibility and then the view of the sky, the sky like a dissolved view, the sky that peeks, the sky that reflects, the sky that, in the night, will hide behind the luminescent white, blue and yellow lights.

The house speaks, attempts to say, with its walls and openings, with its (warm/ welcoming) and (cold/distant), with its blue hues and white tones and with those two initial openings that could well be patios, but are better recognized as windows, windows where that air, the light and in the moment, the water, become a mirror that envelopes, a fountain that refreshes or a mesmerizing pool that hold that sun and the sky alike. If inhabiting is a poetic act, then this house shows its foundation: the interior of a more serene Cancun, calm and free, for a family. A house that almost seems hermetic to the exterior, but also stores its interior and sends it back up into the sky; a house that demonstrates just how living is a complicated act, that sleeping, eating and even watching television are just a scrape of the surface of everydayness, that living is also feeling, it is reflecting and being at peace, the function, more than just the practicality or mechanics, is the opportunity to transcend, a symbolic function, the human function, the transcendental function. 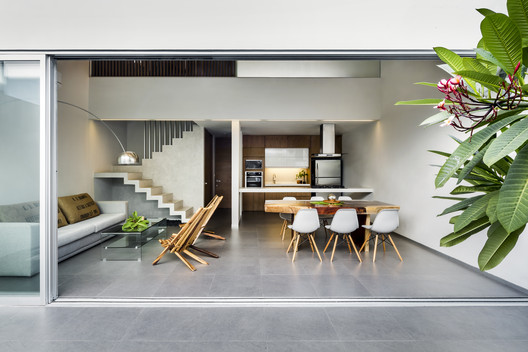