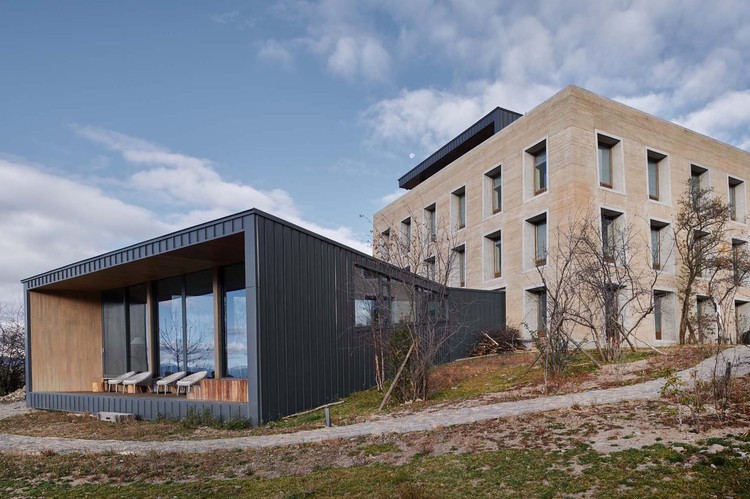 Text description provided by the architects. Sunyata Hotel Meili is a renovation and extension project. It’s renovated from Migratory Bird Inn. The hotel is located at Wunongding village of Deqin county, Diqing autonomous prefecture of Tibetan minority. The land belongs to the 23rd family of the village. Migratory Bird Inn itself was renovated from a vernacular Tibetan house, which had a orthogonal timber frame of 48 columns. Considering the potential problem of load, waterproof, sound insulation and fire protection, the timber structure had been removed and replaced by a concrete frame structure. However, the façade made from rammed earth had been kept, and the square plan layout with a courtyard at its center had been inherited too. After its completion, Migratory Bird Inn had become a important landmark along the 214 national highway. It’s been celebrated as the location with the best vista towards the snow mountain of Kawakarpo, the first of the eight sacred mountains of Tibet.

In 2015, Mr. Guoping Lai(founder of Travelling with Co.) decided to transform Migratory Bird Inn into a small boutique hotel. The new hotel will overcome the severe winter and operates year round.

Site Strategy
The first priority was to increase the floor area of the project. Therefore we had to break the limit of the rigid square plan of the rammed – earth house. The gentle slope to the south leads our view to the village that is several hundred meters away. We attach a triangular shaped restaurant to the south façade of the original building. The section of the restaurant fits the inclination of the topography, directing the view of the interior to the village far and bellow. As a result, dinning tables arranged on every terrace of the restaurant enjoys the view with ease.

We took the advantage of the gap space between the original building and the rugged edge of the topography to the north, and added two rooms and some service spaces with a façade made from the local masonry. The appearance of this part gives am impression of a retaining wall.

We enclosed the roof terrace on the third floor of the original building and transformed this area into guest rooms. And the lounge with the panoramic view towards the snow mountain was raised to the fourth floor and covered by a horizontal eave and enveloped by giant glass sliding doors. The periphery of the eave and the balustrade of the new roof terrace define the upper and lower boundary of the vista, but the gaze along the horizon drifts smoothly, thanks to the 270°transparency of the lounge.

The Atrium
In order to protect the building from the extreme weather in the winter, we covered the courtyard of the original building and transformed it into an atrium. This atrium is the heart of the hotel and also the most difficult part of the design. First, we removed part of the floor of the second floor, and improved the proportion of the lobby space. Secondly, we raised the floor of the atrium to the second floor and created a little library at the bottom of the atrium. The library and the lobby is therefore spatially related on the section, and the arriving guests can be attracted to start a vertical journey from below.Finally, we use three flights of stairs to connect the lobby, the library and the lounge on the top floor. This arrangement of vertical circulation is the most direct and compact design of the stairs we could think of. Especially the two flights from the library to the fourth floor appear almost iconic. The steel truss hiding in the stucco balustrade overcomes the span of the stairs. The abstract form of the stairs creates a moment shifting from the everyday life of a hotel and a sense of monumentality of a religious architecture. We consider a metaphor of a pilgrimage route would be appropriate for the stair leading to the view of a sacred mountain.

We introduced two clerestory windows at the east and west side at the top of the atrium, and a tapestry made from 1364 copper plates is suspended at both ends of the atrium’s roof. Therefore, daylight is evenly introduced into the atrium with the help of the reflection from tapestry’s gold foil surface.

Considering the remoteness of the hotel, the journey to see the Kawakarpo mountain is itself a pilgrimage. In a way, the hotel can be regarded as a temple worshiping the sacred mountain. It just functions as a hotel. After climbing the ladder in the awe-inspiring space of the atrium, contemplating Kawakarpo is far more than an overlook of the “National geographic” style.

Material and Construction
The original rammed-earth of the façade was covered and protected by a layer of concrete mortar. In order to fulfill the requirement of the new hotel, we demolished the original façade and recycled its soil. The new rammed-earth facade is solidified by a small portion of fixing agent and cement and is therefore more robust and enduring. The window on the façade is 1.5 m wide, far beyond the capacity of traditional wood window casing. The new window case is made from cast concrete with polished surface. In order to maximize the purity of the view, we put the operable part of the window at its bottom side. The deep recess of the concrete window casing protects the wood window frame from most of the rain, snow and direct sunshine.

We used steel frame structure and metal jacket to erect and envelope the restaurant and the roof lounge. The lightness of structure and materiality give the appearance of these two extension parts a look of temporariness. 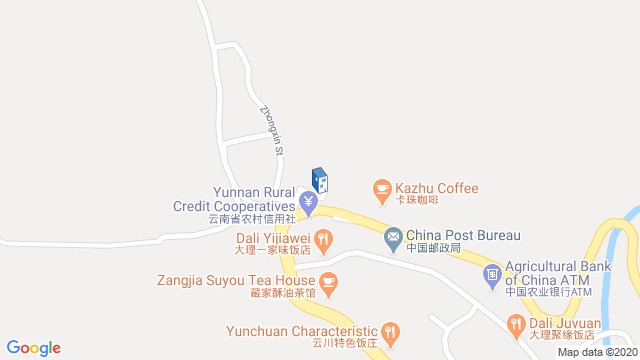 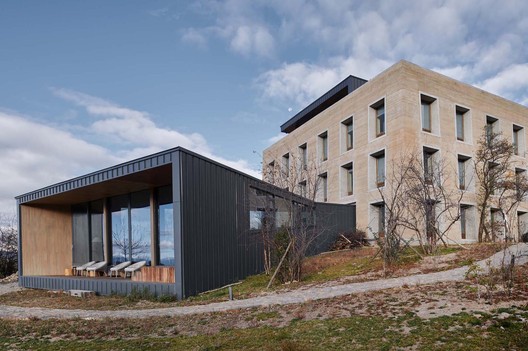