London-based architecture practice Feilden Fowles has won the international design competition to create the National Railway Museum’s new Central Hall. Beating 75 others to the commission, the team will transform the visitor’s experience and integrate a new exhibition gallery, by 2025, in time for the museum’s 50th anniversary.

The award-winning firm founded in 2009 by Fergus Feilden and Edmund Fowles, convinced the jury with a proposal that puts in place an elegant rotunda, an exhibition gallery, a new visitor journey, and an ambitious energy strategy. Inspired by the history of the site, the selected project creates a central two-story illuminated rotunda, covered with recycled patinated copper and lit with high clerestory glazing. Unifying the buildings of the site, the space orients visitors upwards where a first-floor balcony offers views of York.

On the ground floor, five different portals lead guests to different parts of the museum. The new Exhibition Hall, a double-height gallery is inspired by the existing Station Hall and the brick arched openings. A timber frame structure with a set of passive and active design principles, reduce the site-wide operational carbon footprint by 80 percent. In fact, the project proposes to use fully recycled copper and local York stone.

Feilden Fowles demonstrated a real sensitivity to the site’s railway heritage and to the historic character of the city of York. The building will play a vital role in linking the museum and will provide a focal point for the wider York Central development. We were delighted to share all the finalists’ design concepts both online and at the museum; this gave us a real sense of the incredible enthusiasm the public have for our vision to become the world’s railway museum. -- Judith McNicol, Director of the National Railway Museum

Developed with Max Fordham as Building Services Engineers and Price & Myers as Structural and Civil Engineers, Feilden Fowles’ design concept also enhances the adjoining museum buildings. Popular with the public, the proposal will transform the museum into “the cultural anchor for York Central, one of the largest city center brownfield regeneration projects in the UK and Europe”.

We’re thrilled to win this nationally significant competition. The brief combined three of our passions – museum architecture, great railway architecture of the 19th century and working in Yorkshire. […] Central Hall is both a tremendous challenge and a unique opportunity to create a new face and connected experience for the museum. We can’t wait to start work with such a fantastic client. -- Fergus Feilden, Director of Feilden Fowles.

The winning proposal has presence and confident identity, but also humanly-scaled spaces that balance the more industrial character of the museum’s Great Hall and Station Hall. […] This early design concept shows an understanding of railway heritage through a contemporary museum aesthetic that also refers to classical museum design, where large circular orientation spaces enliven the visitor’s journey through the collection. -- Karen Livingstone, Science Museum Group Director of Masterplan and Estate. 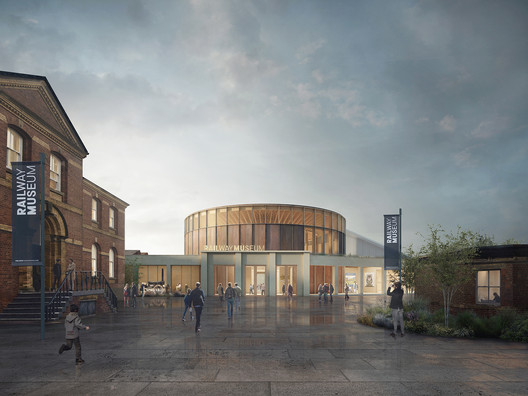