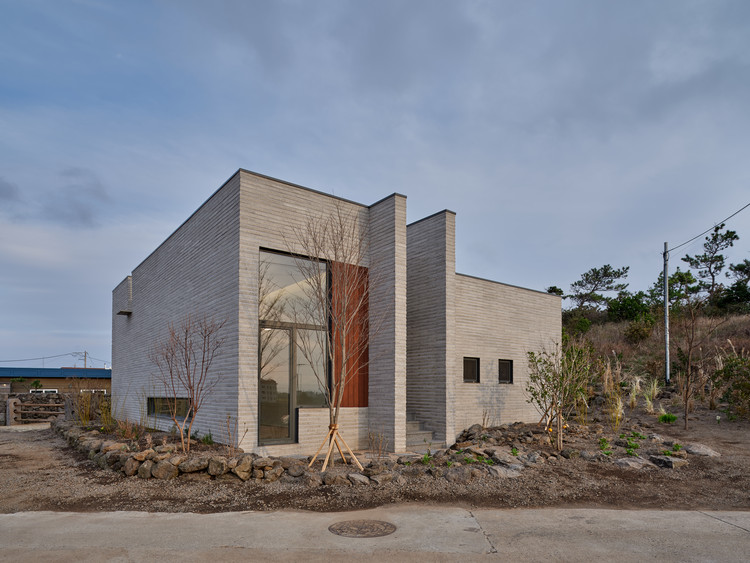 ‘Summmoru’ is a single family house in Jeju, South Korea. It is the southernmost island in South Korea. It is Korea’s the most popular travel spot for nature including ocean and mountain. Driveway to the site follows a sea shore covered with basalt rocks. The site is 140m away from the shore and it is right in front of a small hill covered with bushes and trees. It may seem the mt. Sanbang and the shore is a key from a map. However, a small hill standing beside the site is very strong and it is not very difficult to know that it is a key of this site. In order to understand the site better, team spent a day and night at the site. Through this study, the site almost felt like an orchestra of the nature. It was almost impossible to make this experience better through the architecture. Indeed, while there is a natural orchestra everywhere, it was hard to concentrate on a single subject. Therefore, architecture can value these individual subjects.

The client’s requirement was a single family house which can transfer into a two family house. She wanted to use the house by herself for most of the time but her sisters will visit here often with their families so she wanted a house to be transformable. The other requirement is a huge window and since she is an artist, she wanted a house to felt like a gallery. During the schematic design, a lot of Korean architects face into an apartment issue. Korea has a huge population lives in apartments. Therefore, most of clients can only imagine an apartment plan. However, when it is a residence, it is a different condition so sometimes it needs a different type of plans. It was hard to persuade through the stereotype.

Noun can be a very tricky trap for a stereotype. A lot of people still have a stereotype from noun but verb can be a little different. For example, a word ‘church’ can give a stereotype of image of a form. However, when it changes into a space for ‘pray’, it can break a stereotype of a form and starts to imagine a variety of forms. Therefore, schematic design was done through verbal words only and this certainly helps the client to decide what kind of space she really wants.

The house looks very much like other houses. However, the plan is a bit different. First of all, it is divided into 2 boxes. One is open horizontally through the hill and another box is open vertically through the sky. The house is 100㎡ big but the client wanted the biggest space as possible. In order to create an open space, there is no walls except bathrooms and storage. Indeed, it still divides zones through the floor levels and ceiling heights. For example, the bedroom-1 and a studio has different ceiling heights. Also the living room and the bedroom-2 is divided with a hall that is a step lower. The client still wants a bit of private for the bed so the louver keeps both privacy and open space.

In order to divide into two spaces, stairs are installed in the center and storage are under the stairs. Instead of dividing two spaces completely, there is a frame with a bath between two spaces. This bath creates a frame to give a different view through the hill. The bath has sliding doors on both sides which can control the views. When the client sits down, the linear window is visible at an eye-level. Also when every sliding door closes, user can lie down and look at the sky through the roof window. These sliding doors are not only for controlling the vies it also divides a house into two as client’s request.

Jeju is also known as an island with strong wind. In order to protect a huge window from the wind and also hot summer sunlight, it sets back into a house. This creates a deck and outdoor eaves with walls. This also means the client can still stand outdoor to experience the nature and protects herself from the rain and wind. The narrow stairs heads to the roof and it has two huge walls on the side. The client can only look at the sky while she climbs up the stairs. Once a she arrives at the top of the roof, the nature opens into and orchestra as it was before the house was built. 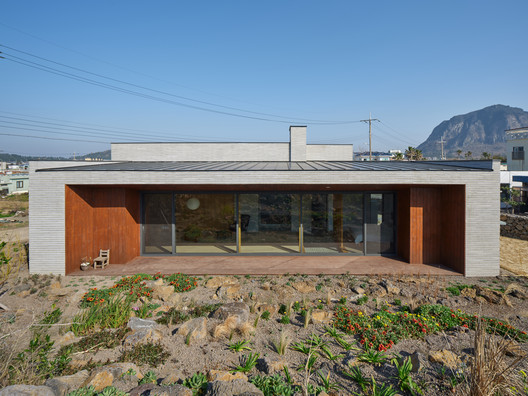