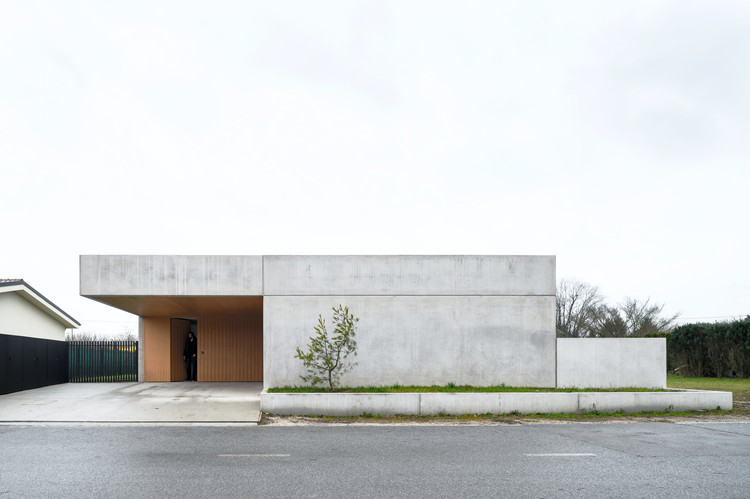 Text description provided by the architects. The atrium house was designed to unite the family’s living quarters with the working studio of its owner – a ceramic designer and artist - under one roof. Its aim was to be crafted in response to the growing trend of working at home. The 550 square meter plot is located in the suburbs of Ljubljana, Slovenia, in an area currently undergoing extensive gentrification. It is surrounded by dense and diverse construction of singlefamily houses. The client wanted to keep the house closed from its visually busy immediate surroundings, which will undergo unpredictable development in the future, while at the same time wished to acquire a welllit and fully connected living and working space.

The house is designed in the shape of a ‘U’. With three walled surfaces, bordering the adjacent houses, the views are directed inwardly, providing privacy from the outside world. The inner spaces of the house open via large panoramic windows onto the large central atrium, which is designed as the in-between space. It allows passage to different parts of the house and direct communication between the workshop and the living quarters. The large glass surfaces delineate the interior from the outside as a thin invisible membrane and bring plenty of sunlight inside. In terms of program the house is divided into three zones. The first one features the workshop and the studio of the ceramic designer, accessible via separate entrance under the projecting roof, and also from the common area.

With its potter’s wheels, kilns, and plenty of table room for sculpturing, glazing and decorating, the workshop opens out onto a large atrium that can be used for outdoor firing techniques such as obvara or raku. The central living space is the heart and the main crossing of the house, accessible via main entrance with doorway. It features a big kitchen with a spacious dining and seating area. During the summer months the central space increases in usable space as daily activities are transferred through the large sliding doors onto the atrium. The sleeping area features a large bedroom, two smaller rooms and two bathrooms. The space is designed so as to allow several programs and experiences, and to create diverse atmospheres.

The building and its interior are dominated by a neutral color palette. The tectonic exterior with its silky smooth concrete façade and light terrazzo floors gives the impression of a sculptural piece, whereas the warm and intimate feeling of the wood-clad projecting roof hints at a different atmosphere inside. The interior living spaces, in parts clad in warm ash and oak wood, are inviting and comforting. The wooden furniture and crackling fireplace create an atmosphere of intimacy, despite the close proximity of the urban bustle. 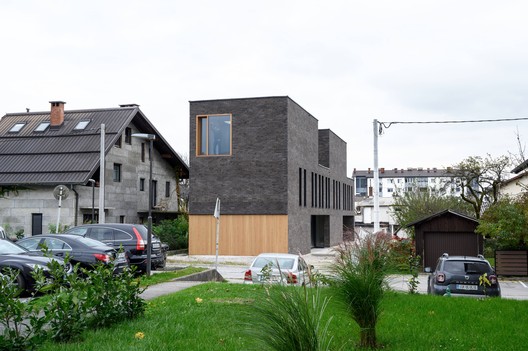 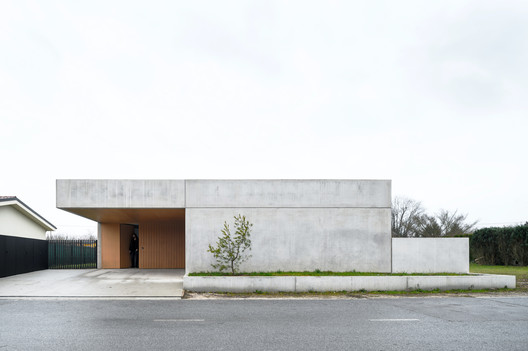