Save
The World's Answer to the Lack of Medical Facilities: Temporary and Convertible Hospitals
Share
Or
Copy

The outbreak of novel coronavirus (COVID-19) that began in Wuhan in December 2019 was declared a worldwide emergency by the World Health Organization just three months later in March 2020, when the virus had taken hold in 173 countries. With a high communicability rate, and a lack of adequate prevention or containment, the virus can infect multitudes of people simultaneously; overwhelming health resources in the most hard hit areas. In countries where the virus initially emerged, buildings have undergone rapid construction and renovation in order to accommodate the growing number of patients infected by the disease. On the other hand, in countries where the virus emerged later, like in the majority of Latin America, governments across the continent have taken preemptive measures to contain the spread of the virus so as not to overwhelm their already resource-strapped health systems.

The emergency sanitation measures taken to create or expand treatment facilities for the infected are divided into two categories: quick-assembly temporary installations such as mobile sanitation units, inflatable hospitals, and even Wuhan's temporary hospital and the adaptation of pre-existing structures such as market centers, sports fields, and schools in order to convert them into medical centers.

Spain: Madrid assembled a temporary medical facility in the fairgrounds of the IFEMA (Institución Ferial de Madrid), the entity responsible for organizing fairs, exhibitions, and conferences in its various sites throughout the city. The fairgrounds contain 200,000 m² of covered space distributed between twelve pavilions, a 10,000 m² convention center complete with meeting areas and a 600 seat auditorium, restaurants, and a 14,000 space parking lot.

The new space will have 1,300 beds for low-risk patients and 96 beds for ICU patients in Pavilions 5,7, and 9 of the fairgrounds. Pavilion 5 is already receiving patients. A medical facility like this one is unprecedented in Spain. The only structures remotely similar are the field hospitals assembled by the army.

Argentina: One of the measures taken by Argentina to combat the Coronavirus COVID-19 was to assemble mobile medical units in the Campo de Mayo military base as an expansion of the Military Hospital. The mobile facility contains three units: medical, admission, and logistics, all of which operate integrally but with distinct functions.

To effectively assist in the containment and treatment of the outbreak, the Mobile Military Hospital, also known as HMR, or Hospital Militar Reubicable, can be dismantled piece by piece, allowing operators to choose and maintain only the necessary portions of the structure while removing the inessentials. The HMR can also be added onto already existing structures as a way to make room for incoming patients.

Germany: Able to accommodate up to 1000 patients, Messe Berlin, the German capital's main exhibition center, has been transformed into a temporary hospital in order to take on the rising number of the country's COVID-19 cases. Located in Berlin's Charlottenburg-Wilmersdorf district, the center hosts the annual ITB fair, which has since been cancelled in response to the outbreak.

For German health officials, the new hospital is the latest measure taken to ease the strain on the country's health system. The facility will be dedicated to the treatment of both mild and severe cases of the virus.

Mexico: With the help of Spanish company Tecnodimensión, México has assembled a 1200m² mobile hospital in Pachuca de Soto to combat the country's rising COVID-19 cases.The rapid assembly structure is an effective tool to create large spaces with minimal time, making it an ideal solution for medical centers that are pressed for space.

United States: In King County, Washington, work is underway to convert the city of Shoreline's Soccer Field into a 200-bed medical unit. County officials are also working to assemble temporary housing for the area's homeless population as well as for residents that are unable to stay in their own homes during the outbreak.

An increasing number of cities and countries across the world are turning to mobile medical facilities as a way to create and expand the space and resources available to their health systems. For many, this is a glimpse into the future of global healthcare. As evidenced by the closure of Wuhan's temporary hospitals during the first week of March, mobile medical units have proven to be a key resource in effectively quelling outbreaks and adding time and resources to the medical personnel working on the front lines of the pandemic. 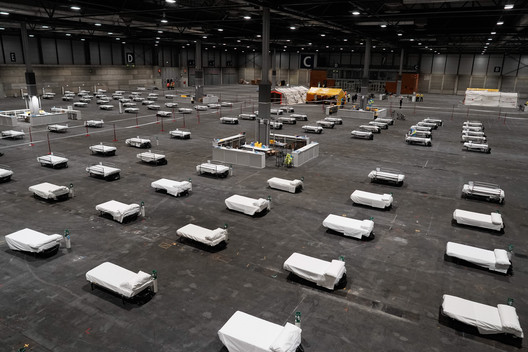