Save
Marc Thorpe Imagines “Citizens of Earth” Installation on the U.S.-Mexico Border
Share
Or
Copy

For Marc Thorpe, “the socio-political rationalization for borders drawn on the earth have proven throughout history to be problematic”. Inspired by Ronald Reagan’s speech in the United Nations General Assembly in 1987, where the president suggested that only an alien invasion could unite the increasingly divided world, the designer imagined “a polished steel disc that appears to hover in the desert, gently reflecting the surrounding border of the United States and Mexico”.

In fact, the installation for the desert of Marfa will put in place a vanishing disc, depending on the time of day and lighting conditions. Seamlessly integrated within the desert landscape, the project aims to blur the distinction between light and dark, solid and void, sky and earth, United States and Mexico, questioning the worth of borders.

Reminiscent of the first flying object reported in 1947, the structure reflects, therefore, our existence on this planet. Thorpe adds up that “if we are not alone in the universe that we must represent ourselves as one united civilization […] If the properties that govern the universe are borderless we must begin to evolve our understanding of ourselves within its architecture. The disc stands a symbol of our humanity as citizens of earth.”

Currently, countries, societies, and communities are becoming increasingly polarized. The military strategy of divide and conquer is being implemented around the globe by governments, corporations and the media in an attempt to separate us by stressing our differences. Feeding on division, insecurity and fear pushing us further into isolated corners of apathy and indifference towards our neighbor. So the question becomes, what if there were no more borders? What would it take for mankind to shift from me to we? What if we all understood ourselves as citizens of earth working towards a common purpose? What would our new unified purpose be? -- Marc Thorpe Design 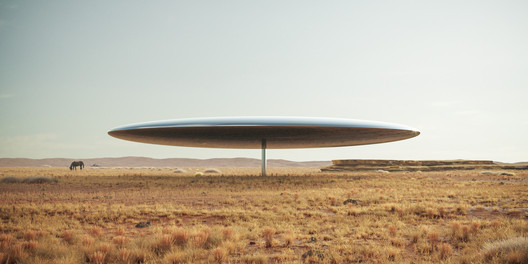