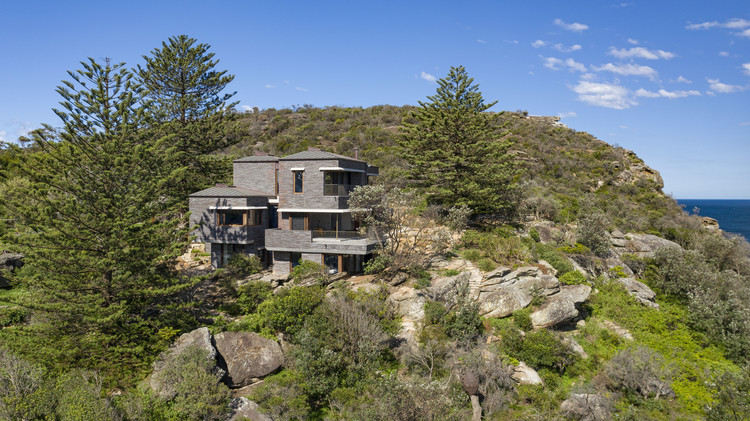 Text description provided by the architects. A home inspired by its location, perched on a rising monolithic headland of sandstone and shale, jutting out into the Pacific Ocean just north of Sydney in the beachside suburb of Avalon. Designed to respond to this dramatic environment with a rustic rugged exterior and a raw but highly crafted interior.

Briefed by a couple of journalist empty nesters to ‘do the site justice’, ‘be part of nature’ and to ‘last 100 years’. A rigorous design process ensued, before a topographical response produced a series of steeped, staggered and linked blocks or pavilions set carefully amongst the boulders and twisted tea trees strewn over the headland.

Highly visible from the popular public beach, the house replaces a rendered pink Tuscan style villa with a modest sized 350m2 house rooted in the hillside on 3 tectonic platforms enclosing a sun drenched and wind sheltered entry courtyard to the North, while overlooking the ocean and beach to the South and West

The scale, form and material pallet all seek to work with the terrain; cantilever terraces and balconies, exposed hoods and deep recessed openings ensure light and shade enhance the modulated facades. The five attached pavilions are linked by a double cross over axis, directing the entry and vertical movement pattern of the house and aligning with the two principal aspects the house enjoys - the long distance southern coastal view and immediate western beach view.

Vertically, the plan is arranged into three functional areas; the top floor private master suite, the ground floor garden level comprising the kitchen, dining, living and studies, and the lower cave like sheltered guest rooms tucked into and between the rocks.

Access is via a battle axe drive through a Corten and copper gatehouse into a sheltered garden court dominated by a giant Norfolk pine tree. A vaulted entry canopy projects into the courtyard, appearing to float inside while supported externally by a natural sandstone column found on the site. The house’s cliff-top aspect is completely concealed until the front door is opened revealing a double height space aligned with the coastal headlands, stepping down into the main living room.

The tectonic expression of the Ken Murtagh engineered concrete skeleton inside and out provides large openings protected from sun and rain while reflecting the horizontal layering of the cliffs below. The living room has fully retractable doors to two sides allowing a panoramic corner view and access to the terraces, made possible by a slender load defying brass clad post.

The buildings materiality is raw as the brief required.  Constructed both inside and outside from 500x40 bricks by S. Anselmo. Smoky burnt grey/black bricks externally blend with the weathered sandstone surrounds. White bricks internally create an ever changing play of patterns and light as the sun moves around the building. Stone floors throughout reinforce the earthy materiality of the spaces while vaulted timber ceilings rise to northern rooflights flooding south facing rooms with light and sun. Fine brass railings mellow in the sea air, and allow views through to the ocean and surrounding heathland. All timber is FSC Certified Mailkaro including the double glazed Praarhammer fabricated Bal 40 windows and doors.

Central to the house is a finely crafted floating concrete stair connecting the 3 levels featuring a brass sculptured screen by Caroline Casey who was also responsible for all the highly resolved and detailed joinery and furnishings throughout the house. 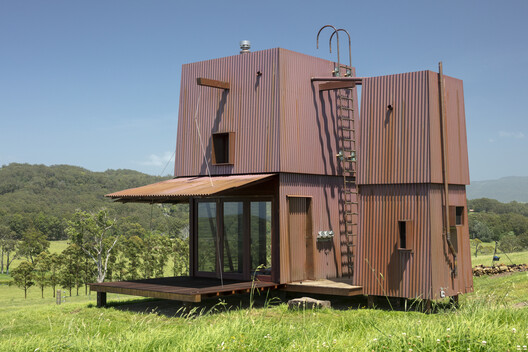