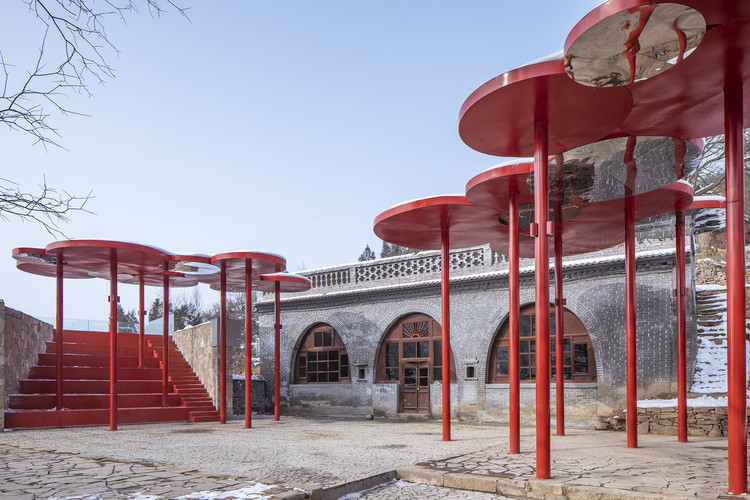 Site status: public space and spiritual place of the old village. The project is in the old Hanhonggou Village, Qinyuan County, Shanxi Province, China. The village is located at the junction of the eastern suburbs of the county, 4 kilometers away from the county seat. The village was built in Hongwu Period of Ming Dynasty, named after a flood discharge ditch in the village. There are 138 households in the village, with a population of 488. At present, most of the population in the old village has moved to live in the new village, and only four residents in the old village live there.

The old village is adjacent to the new village, and the original pattern of the village is complete. From west to east, the village is in a multi-level platform terrain. The buildings are built according to the terrain, which can be roughly divided into two types, i.e. residential houses with earth wall and double slope roofs, mostly in the flat area, and cave houses, mostly near the hillside. The traditional features of the old village buildings are well preserved, with the historical traces of ancient trees and ancient slope protection, which has a high cultural value. In addition, because it was the location of the Logistics Department of the party, government, and army in Taiyue District during the Anti-Japanese War, there were many old sites with red memories of that year in the village, which also provide a fulcrum for the future development of Hanhonggou Village.

Most of the houses in the old village are in idle state and, because of the uninhabited and disrepair all the year round, are more or less damaged. In addition, the continuously moving out population and the lack of industrial support also make the old village in Hanhonggou wither day by day. How to keep the traditional face of the village, at the same time, implant new industries, promote the village economy, improve the environment and the quality of life of the villagers, enhance the vitality of the village, and finally complete the revitalization of the village, are the challenges and problems to be solved in this work.

This project is a part of the overall rehabilitation plan of the old Hanhonggou Village, of which the base is a courtyard, located in the middle of the old village, with high terrain. There is an empty three-hole cave house in the courtyard. The current situation is good, but the side rooms, a reversely-set house (north facing house opposite to the main house), walls and gates have collapsed, leaving only the foundation stones. The most important element in the site is the big locust tree outside the yard, which is hundreds of years old, but still full of branches and leaves, guarding the village like a god. According to the introduction of the old people in the village, under the big locust tree has always been the place where villagers gather, which used to be an important public space and the spiritual place of the old village.

Space construction: reshape the genius loci and endow new temperament. Just like the current situation of old Hanhonggou Village, the big locust tree has changed, and the bustling of the past no longer exists. How to reconstruct the rural public space, so as to reshape the spirit of place, the genius loci, is the focus of this design. In addition, the designer does not want to simply repeat history. After all, the old Hanhonggou Village has a new industrial orientation, that is, rural tourism based on regional architectural style and red historical heritage. New villagers and new industrial orientation need the big locust tree and space under it to play a new role.

The designer set the new functions as a rural memory hall and a small theater. The old kiln cave was renovated, its appearance remained unchanged, and the interior space was rearranged as a small historical exhibition hall to show the history of old Hanhonggou Village and the deeds of Taiyue military region during the Anti-Japanese war. The collapsed wing rooms and inverted seats have not been restored. The designer does not want to simply "build new as old", but hopes to give the site a new spirit of place through the addition of new buildings.

In the past, the villagers gathered under the big locust tree to communicate with each other, which inspired the designer. This is a semi-open public space: the crown of the tree defines the "boundary" of the place, and the crown, shadow and human activities constitute the temperament of the space as well as the events in it. This is a prototype of public space.

The designer hopes to reproduce the scene and prototype with a new "specious" design language. A group of umbrella-like structures is designed, with caps in different sizes and connected with each other, forming an irregular "top" composed of multiple circles. It covers 1 / 4 of the courtyard area and looms into a semi encircling shape around the big locust tree. The location of the collapsed wing room on the west side of the courtyard, an outdoor stand is constructed, which is trapezoid in shape, lower in the east and higher in the west. Together with the old kiln cave, big locust tree and umbrella structures, it redefines the spatial attribute of the site. On the one hand, the outdoor stand provides the audience seats for the outdoor theatre. On the other hand, it also provides a high point for overlooking the village.

Using the indoor space under the inclined floor of the outdoor stand, the designer designed a sunken theatre, where movies or video content can be shown, complementing the functions of the outdoor stand, meeting the needs of indoor activities in winter in the northern region. The southwest side of the small theatre overhangs from the site, and the contrast between the real and the virtual formed by the floor-to-ceiling glass and the stone wall further strengthens the visibility of the building, which provides a visual guide for the way into the old village. Together with the indoor theatre, historical exhibition hall and outdoor space, a new public space under the big locust tree has been formed, which enriches the rural spare time life and provides a venue for the local people and the new villagers in the future.

Artistic intervention: both architecture and installation. Here, the designer also tries to "confuse" the boundary between architecture and art installation. On the outdoor stands, umbrella-like structures are covered with red color, forming a strong visual language different from conventional architecture. It tends to be more artistic expression, simple, strong, even slightly extreme. At the same time, red gives the space a new aura: more open publicity, dramaticism, narrativity and tension are simpler and more powerful than architectural language.

In order to further strengthen this artistic language, the designer installed reflection mirrors on some domes. Standing under the umbrella-like structure, people can see their own image from the reflection mirrors. The dialogue between one and oneself makes the venue more interesting, relaxed and resonant.

In addition to enriching the physical contact between human and space, the pillars of umbrella-like structures further strengthen the uncertainty of drama, which is also the designer's intention: the existence of pillars makes the drama unable to appear in the conventional form but also promotes the relationship between performance and space. Certainly, the open space in the inverted seat position can ensure normal performance. Virtually, the site has become more uncertain, which can be redefined by different users and use conditions. This might be the space model needed in the post-industrial era.

Tell good red stories: storytelling in the contrasts of colors, materials, light and darkness. The designer believes that architecture and environment are not only the carriers of past stories but also the narrators of contemporary stories. The display of red memory can not only be a rigid display board on the wall, but also a space experience, and even be understood and praised by people through drama and activities.

A large number of red elements are used in the space to produce psychological hints of specific themes, while bouncing materials (such as the mirrors under the umbrella-like structures) are added to make the overall atmosphere less serious. There are differences in light and shade between the indoor and outdoor theatre spaces, which respectively correspond to different atmosphere requirements for viewing historical images and performing at present. The low space and earth wall materials in the kiln cave of the village history museum are completely preserved. The customized five-star wall lamp device defines the theme of the space. The internal exhibition collects the old objects and photos in the village so that visitors can feel more vividly the heavy history borne by the site.

The designer hopes to indirectly narrate the story carried by the site through a variety of space languages of the building and environment so that the users can resonate with the red themes in the process of using the space.

On the basis of carefully reading the context of the venue, the design team of the project reshapes the genius loci the venue by adding new functions, so as to make it more in line with the new industrial demands of the old Hanhonggou Village, as well as the aesthetic and spiritual needs of new villagers. In terms of design techniques, the use of contemporary architectural and artistic language forms a dialogue between the new and the old. This kind of dialogue is not antagonistic, nor confusing the information of the times, but a symbiotic relationship of "forgetting the ages". 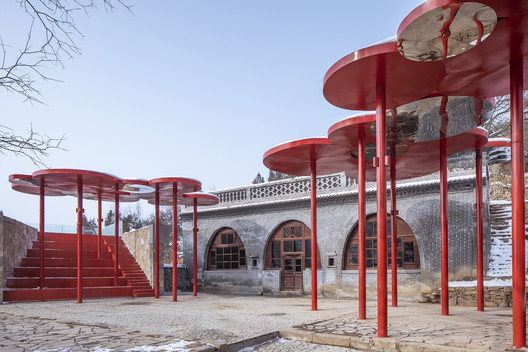