Save
Sacred Heart of Jesus / ACDF* 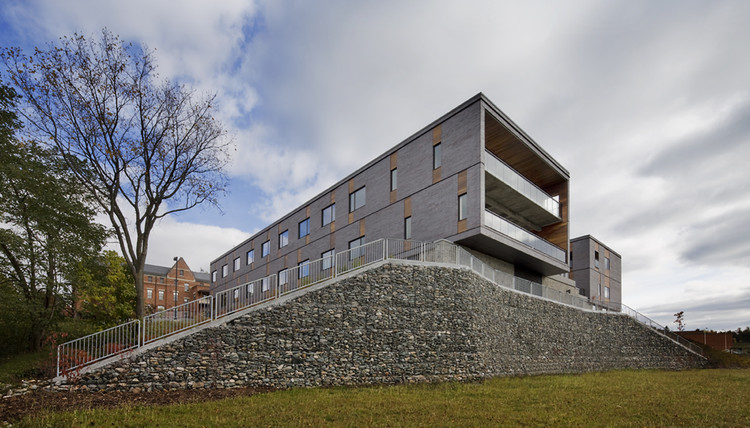 Text description provided by the architects. The extension of the Mother house of the Sisters of Charity of the Sacred Heard of Jesus in Sherbrooke is 56,680 sqf and includes a 54-room health care unit with all the attached services, a kitchen to serve 200 people, a physiotherapy room, a library, maintenance workshops and an inner courtyard designed with a garden.  More photographs, drawings, and sketches of this project following the break.

The extension project is based on the importance of providing a capacity of narrative. Besides the scale addressed, built or landscape, the proposal is thought as a "living together" and a form of exchange, by multiplying the paths, the freedom of the place, the possible uses, and the atmospheres. The project pays particular attention to the connection to the site with its context while ensuring a harmonious integration with the existing building.

The site’s topographical situation, with its strong slope downhill towards the St. Francis River, is one of the generating elements of the architectural concept. In response to this site’s condition, several stone and gabion walls have been placed to establish a viable settlement area between the existing building and the river. These stone walls are placed in extension to the stone foundations of the existing heritage buildings.

Imitating the simple gestures of a child immersed in a wooden block game, inventing worlds at different scales, the two volumes of bricks of the project are simply laid on the stone walls. These brick volumes contain the main function of the program: the bedrooms and the health care rooms. Either overhanging or flush mounted with stone walls, these pure volumes generate a dialogue between the river and the existing building. The integration is also made by contrast in terms of volumes. The extension of the stone walls of the chapel and the colour of the brick siding; in connection with the slate roof of the building, also contributes to this harmonious integration. Inserts of roasted wood create a dynamic rhythm on the longitudinal facades of the brick volumes.

Positioned at the centre of the brick volumes and in extension of the existing chapel, the common areas (living rooms and dining rooms) overlook on an outdoor garden. This garden is raised one floor higher allowing users to enjoy a safe outdoor promenade (prosthetic) while contemplating the St. Francis River and the surrounding landscape. All architectural and landscape attributes help to create a quiet place ideal for introspection ... and in dialogue with the church and its spiritual character. 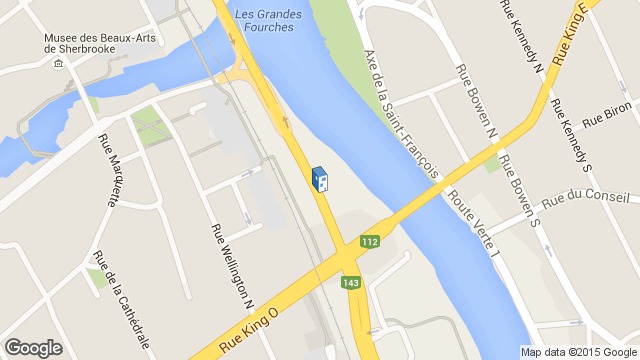 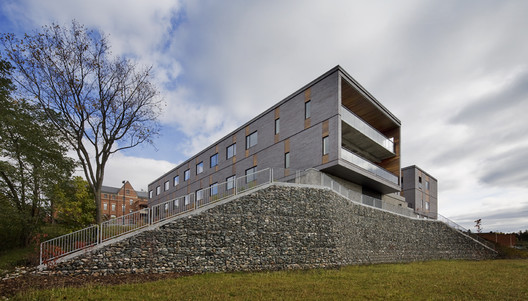