Text description provided by the architects. SIE/Home21 is a multifunctional building. It is also an ambitious social housing project that provides 244 units of exceptionally affordable housing for members of society who rarely have access to quality dwellings. This project is a part of the City of Vienna’s “Rapid Housing Program” (Sofortwohnbau-Programm); it was planned and built in an exceptionally short period of 20 months. It was the demands of this program that brought its diverse functions together under one roof. The Rapid Housing Program was a response to Vienna’s housing crunch of 2015-2016; it subsidized the pro tempere erection of housing upon underutilized, commercially zoned real estate. This housing could either be composed of temporary, mobile constructions or comprise permanent buildings with fixed-term occupancy for housing. Home 21 fits to the latter category. This fact underlies its use-neutral multifunctionality. The building will provide the city with housing for the first 10 years of its lifecycle, after which it must be capable of being economically converted into commercial property. This precondition required a simple, rapid and use-neutral construction.

The SlimBuilding® system (Patent Dr. Winfried Kallinger) was our answer. This innovative, composite system combines slender steel columns with cast-in-place ferro-concrete floor slabs, generating open, non-directional spaces with neither cross-beams nor load-bearing walls. SlimBuilding® reduces construction time for the building shell by half – and efficient construction is a basic requirement for rapid housing, as well as an essential parameter for its rentability. The project must be amortized within fifteen years, and the construction costs could not exceed €1.200,- /m² (£1.080,--/m²) – which is about 20% less than other housing estates that use typical means of construction. SIE/Home21 optimizes the potential of the SlimBuilding® system. The floor plans use a strict, highly economical grid that is ideally suited for both housing units and for future commercial use. The loft-like spaces have ceiling heights of 2,82m and can be subdivided in many ways. The initial programming reflects the social concerns of the Rapid Housing Program. The compact yet well-organized apartments are to be rented to low-income tenants, many of which are recent arrivals in Vienna. In the first floor of the north-west tract is a centre for single-mothers; the ground-floor of the south-east tract houses assisted-living for the elderly. Many of the tenants are recovering from recent bouts of homelessness, and Home21 represents their first apartment after years of living rough. The complex has no cellar and is not built-out below grade.

At-grade parking complements the compact, flexibly sub-dividable commercial units on the ground floor. The architectural language and the project’s materiality reflect the principles of program, building system and economy. It harmonizes the building’s structure with the balconies, the facade and the ground floor usage. The frame of the balcony system is built out of simple, galvanized steel sections. Its verticals align with the axes of the SlimBuilding® system, and the pre-cast concrete balconies are laid upon its horizontal consoles. The balustrades are built out of coil-coated sheet aluminium in trapezoidal profile. The balconies can be set upon the consoles in two positions. This generates a rhythmic counterpoint to the strict order of the system’s grid. The play of colour between the red-rendered facade and the gold-tones of the balconies lends the architectural composition warmth and interest. 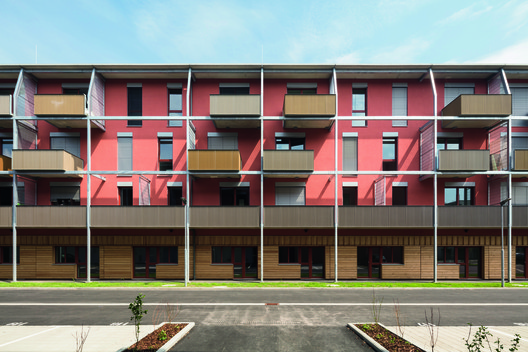