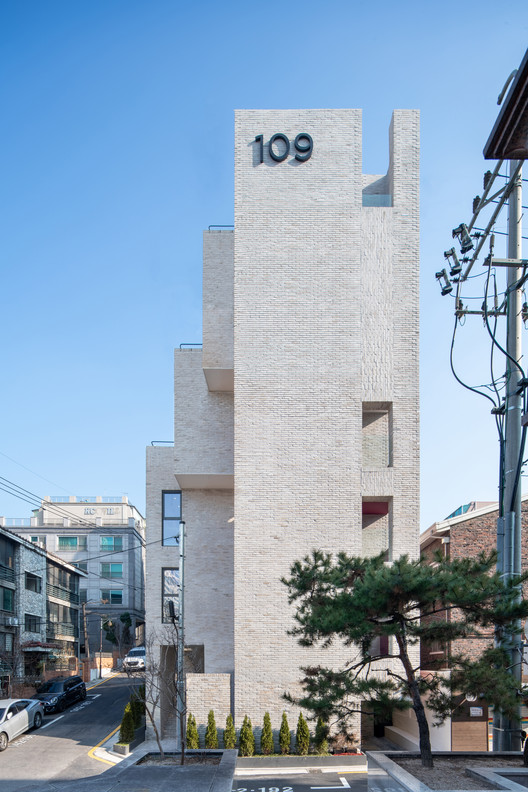 Text description provided by the architects. Nonhyeon 109 is located at on the corner of the a three-way street inside the a densely populated city block in of downtown Seoul. Therefore issues, such as the maximization of the space area upon the owner’s request and the unavoidable right-to-daylight claims made against the adjacent buildings are common problems often encountered by the architects when assigned to a micro-site in the city center.

In this project, the massing of each floor connects at to different locations to yield the maximum area, in consideration recognition of the limited daylight on in the northern reaches, and the a possible balcony expansion (which is anticipated from the layout of the residential spaces on the 4th and the 5th floors). The An ethical conundrum weighs has presented itself, in as the kitschy roof slope (or the exaggerated cantilever system derived from the a raw process)are have been avoided on along the borderline of demarcating the site, the adjacent roads, and neighboring publicly and privately-owned sites.

The masses volumes on top at the top are connected to the a vertical wall which that links down to the road at ground-level on the ground, putting a finishing touch to the an overall arbitrary movement of the masses. The red exterior staircase in between is derived from another design strategy to display illustrate the original mass and the designer's explicit intentions explicitly.

The owner ran an architectural acoustics company and planned consigned part of the building as to a company building business. His studio is placed on the basement floor to avoid the disruption by of outdoor noise and and vibrations. The first basement floor has features an office while the second basement floor consists of a lobby for the reception and a recording studio. Above On the levels above the the ground floor level, where the parking lot is located, there are more office spaces, for the affiliated companies on the 2nd and the 3rd floors, and residential spaces, on the 4th and the 5th floors.

The setback terraces, created by as part of the original masses, function as a ‘pocket’ spaces that connects with the interior space of each floor, and the rooftop garden as offers a pleasant resting space for the employees. However, the owner's bold decision of to extending the outer wall by on one floor was asked organised in order to avoid sun exposure to the sunlight and the for safety concerns with regards to danger on the rooftop level floor. By investing more in structural and envelope materials, the owner can now possess a much bigger larger space to within which enjoy the hidden city views from the center of the concrete jungle. 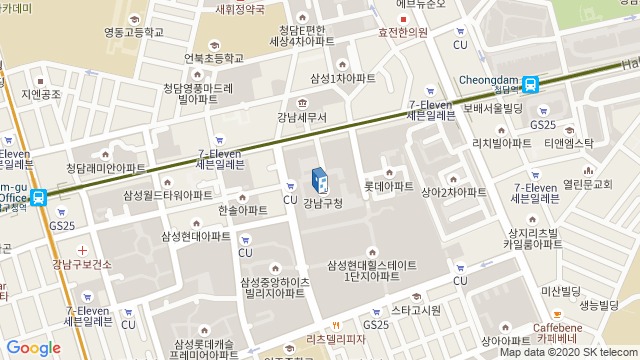