Save
Train House / ON Architecture INC. 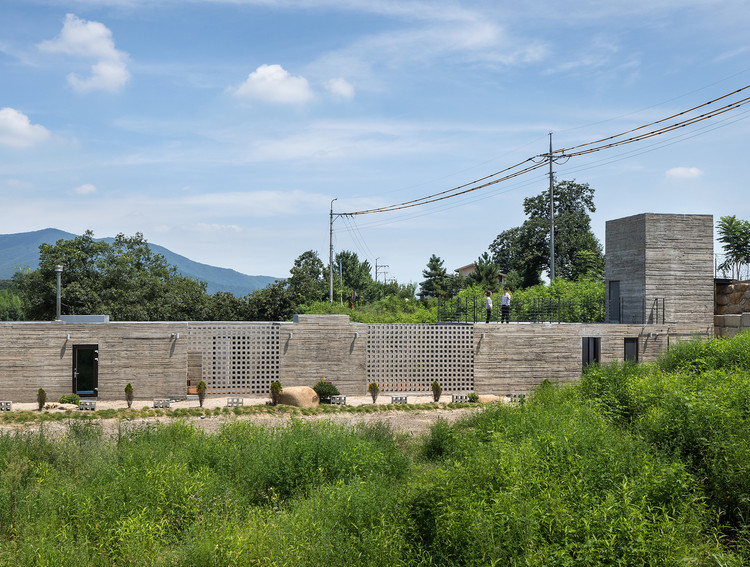 Text description provided by the architects. A couple who has been living in the city commissioned me to design a small house where they will live with old parents. The site had a shape inappropriate for use and significant difference between its highest and lowest levels. In most cases of planning a country house on a site lower than the road around, one levels the site up to the road before building the house.

The planning of this project began in a similar way. However, oppositions arose from the neighborhood residents making it impossible to level up the site, so that I had to come up with another new idea. Reaching the conclusion that it is inappropriate to recklessly level up the site to build a country house but it is architecturally possible to utilize the land-form in a way that minimizes the damage of nature, I intended to suggest a new possibility through this "Train House."

As the roadside tip of this project faces the south, daylight was not enough to maintain the amenity of living. To resolve this problem, I inserted in a linear mass three courtyards with different characters as outdoor spaces to make the whole building breathe. The client's and the parents' living areas were spatially separated to maintain their own privacy, while the semi-porous outdoor courtyards were made to cause communication between them. The insertion of space where one can see the sky enables communication with the light everywhere in the house.

The master bedroom has its own small courtyard to ensure the couple's independence, but also connects to the main courtyard that enables communication with the parents anytime. To the north were arranged the vestibule, restrooms, utility rooms, and the utilities so as to make functional advantage against the wind blowing from outside. The relationship that the functional unit spaces made around the outdoor space recalls a unique image that seems like the form of a long train connecting a chain of cars.

The surface of the building is finished with exposed concrete as an expression of rough texture like the old tree bark of a Korean traditional house. Aspiring to represent natural roughness which is traditional in Korea, I conducted experiment and research on pure materiality for a long time and finally made it with carbonated exposed concrete. After all, the building gained expressive facades reflecting daylight in various angles for all day long and gradually changing the color sense and feeling of the concrete over time. I hope this small Train House with a long linear mass consisting of indoor and outdoor spaces making balanced superposition will become a proposal with another possibility in our life which has accustomed to the ordinary built spaces.