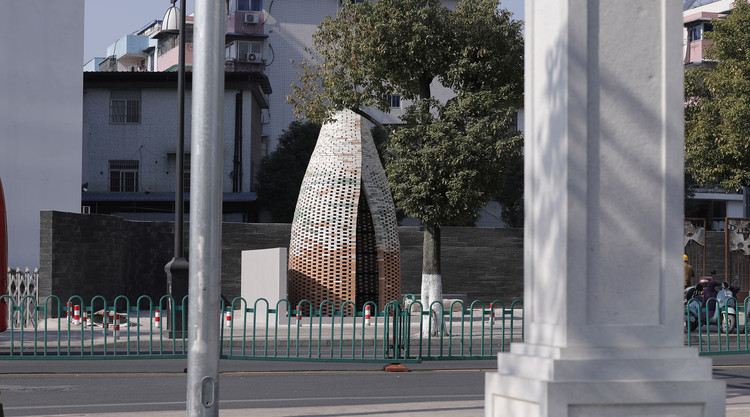 Text description provided by the architects. Longquan, located in Lishui of southwest of Zhejiang, is famous for firing celadon. "Kilns are all over along Oujiang River, that fires can be seen across the river”.

The moment the ancient dragon kiln is opened, thousands of celadon tones would emerge. The myriads of changes is the beauty of celadon.

People love porcelain, but pay little attention to the kiln that fires it. Batch after batch of fine porcelain out of a kiln, yet the kiln stays unobserved. What if the kiln fires itself? Endured flambé glaze over and over, glazed kiln bricks reveal delicate touch of celeste. On this contemporary installation of kiln, layers of celeste touch emerge on the brick skin. The kiln completes its transmutation out of piles of rough bricks, turns itself into an installation of public rest – “Celeste”, and stands at the street corner of Lishui City.

During the day, it is a place for children to play. At night, couples light candles inside. Through holes between bricks, it looks as if thousand year old kiln fire had added a layer of shiny gloss to the outside enamel.

A terracotta bricks was endowed life by firing. After being glazed and fired again, out of kiln it gained its soul.

This installation is a public artwork as well as a brick structure that utilizes a traditional technique of corbel dome, which was often used when building pagodas in ancient times. The shape of the kiln is imitated by a rolled paper tube, the lower part forms an entry and the upper part is strengthened by laying the bricks without gap at each layer to form a corbel arch. The basic shape was modeled through Sketchup software.

The structure sets inward while going upward, that raised questions as how far the distance of each layer of corbel should be, and what is the minimum radius required to form a corbel arch by bricks, and so on. These questions were answered by real masonry simulation. In order to ensure the accuracy of the construction, the wood formwork was computer-modeled and laser-cut. It was assembled with eight vertical keels and one horizontal keel every 30cm by height, and finally covered by plywood before the full-scale masonry mock-up.

In actual on-site construction, two corners of each brick were cut off to be reshaped into trapezoid in order to increase the contract surface between bricks that form the corbel arch so as to guarantee the mechanical property of the dome.

The Celadon and bricks use different materials for clay body. Special sintered bricks were chosen to be glazed and re-fired. In order to reflect the color variation of kiln transmutation, special glazing skills were utilized to finally produce 2,500 bricks, each with different glaze color. Starting from the lower layers, glazed bricks were gradually added to this structure till full cover, thus forms a special glaze effect of Celeste. 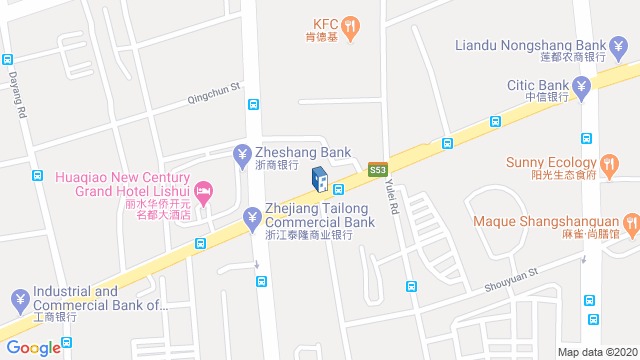 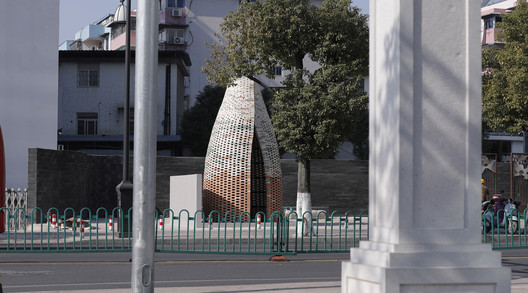