Save
MILLIØNS Proposes Extension for the I.M. Pei-designed Everson Museum of Art
Share
Or
Copy

MILLIØNS, headed by SCI-Arc Faculty Zeina Koreitem and John May, was announced as the winner of the Everson Museum of Art competition. The L.A. team’s proposal was selected from submissions by four semifinalists including FreelandBuck, NATURALBUILD, and Normal Kelley.

Scheduled for opening later this year, the project puts in place a café for the I.M. Pei-designed Everson Museum of Art at Syracuse University in New York. The renovation works will also introduce an event space and a “double-height display wall of translucent curatorial towers for a rotating selection of works from Dallas-based artist and collector Louise Rosenfield’s donated 3,000-piece functional ceramic collection.”

MILLIØNS brings a striking individuality to their work […] Their approach to the café design within I.M. Pei’s iconic Everson brings to mind Pei’s own daring intervention into the Louvre. MILLIØNS included prismatic glass towers in their design, brilliantly combining function with architectural flair and conceptual rigor. They not only thoughtfully engage Pei’s style; they have highlighted its unique characteristics while simultaneously giving Louise’s collection the prominence and respect it deserves. We are all so very excited to work on this project with MILLIØNS. Together we are creating a café space and experience unlike any other in the world. -- Elizabeth Dunbar, Everson Museum Director.

With “few big moves”, MILLIØNS integrated its design in the 1960s Everson building. The young firm created an informally arranged translucent wall of shelving that connects the museum’s two floors, the atrium and gallery of the lower level and the café on the upper level. “A series of inverted pyramids, evoking Pei’s geometric aesthetic, [are] arranged in clusters throughout the atrium space”. The design also features a mirrored wall and ethereal colors. 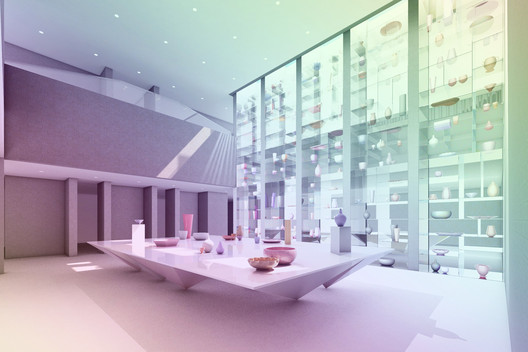