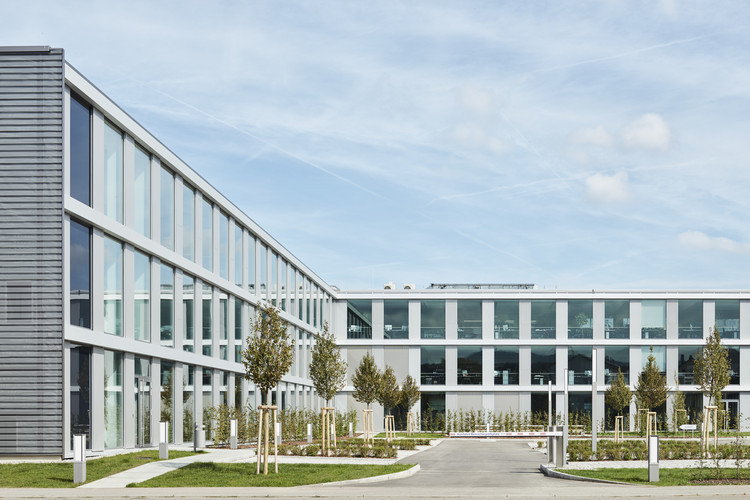 Text description provided by the architects. After a construction period of only 12 months, the machine building company celebrated the completion of a three-aisled production hall and an adjoining three-storey office wing with training facilities as well as a representative visitor car park in the summer of 2019. Consistent continuation of the architectural concept. With over 3000 employees worldwide, EMAG produces manufacturing systems for precision metal components. The Stuttgart-based architects had already completed a joint production hall and office building on the company grounds in Salach close to Göppingen at the beginning of 2003. The shop floor and offices are immediately connected. This concept of a direct link between administration, production and logistics has been reapplied in the south extension of the EMAG headquarters. The exterior finish also reflects the continuation of the architectural concept: the new production hall has been clad with the same horizontally fixed trapezoidal sheet as the existing halls; the aluminium and glass curtain wall of the office wing continues the facade design of the existing building immediately next door.

Client’s passion for architecture is a basis for good industrial buildings.The architects Neugebauer + Rösch have planned buildings for the medium-sized enterprise in Salach as well as at other locations in Germany and China. The passion of EMAG’s senior partner, Norbert Heßbrüggen, for architecture and his demand for high quality is an important basis for Robert Rösch in providing superior constructions, which is also the case for the new extension. The experienced architect says that this is an unusual situation since “not every medium-sized company in Baden-Württemberg understands the advantages of good architecture.” Visual link between administration and shop floor. The new building, accommodating a manufacturing hall and an office wing, connects to the existing office and production building at a 90° angle. The three aisles, each measuring 24.00 m or 22.50 m in width with a hook height of 9 m, and the orthogonally arranged logistics facilities for loading the new machines have a total gross floor area of approximately 10,000 sqm. Thanks to a fully glazed facade, there is a direct visual link between the production areas and the office levels. The filigree glazing, which is barely noticeable, allows the white finish of the hall ceiling to continue into the work zones of the office wing. “A direct spatial link between the administrative and manufacturing space is not usually the norm in industrial buildings,” explains Robert Rösch. However, this structural concept reflects the philosophy of the family business, and the architect adds: “Everyone sees each other and is on equal terms.”

A gross floor area of around 4000 sqm is available on the three upper storeys and in the basement of the office wing. The basement accommodates the changing rooms, heating and ventilation equipment. The training facilitiesare located on the ground floor. This is where customers are trained in close proximity to the machines set up in the production hall. The two upper office levels provide space for approximately 140 employees, among others for the construction teams. These members of staff also benefit from the visual link between the offices and the production hall: planning is upstairs, assembly downstairs. Assembly hall and office wing form a single fire compartment.In terms of the construction method, the new building also corresponds with the existing structures. The production hall is a steel framework, whereas the office building is a solid reinforced concrete construction with a curtain wall facade.  Since the new hall significantly increases the useful floor space, a fire-resisting wall had to be constructed between the old and new parts. The wall consists of prefabricated reinforced concrete columns, which are set on partly existing foundations, with aerated concrete infill elements. Two gates, which close automatically in the case of fire, connect the extension to the existing building. 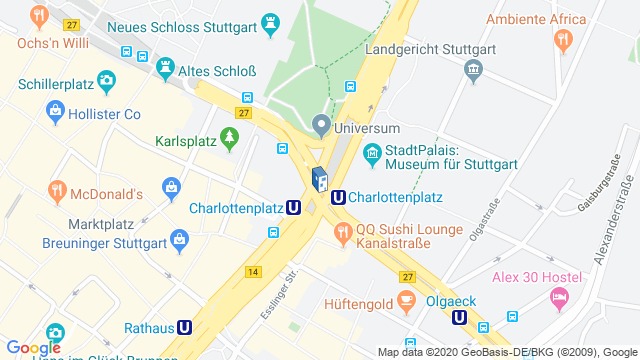